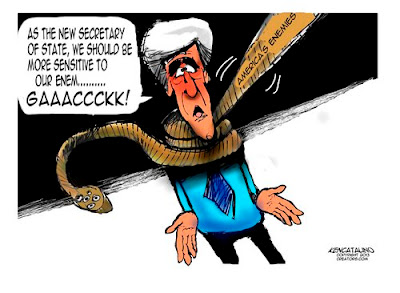 Since the 1979 Iranian revolution in which American diplomats in Tehran were taken hostage and held for 444 days, the U.S. has had no discernible policy regarding Iran except to talk endlessly about talking with the handful of ayatollahs that have run that prison nation ever since their takeover. The Shah was no choir boy, but he was a reliable ally. Iran has been in a virtual state of war with the U.S. for 34 years.

When John Kerry replaced Hillary Clinton as our new Secretary of State, Reuters reported that “Iran’s supreme leader Thursday (Feb 7) strongly rejected proposals for direct talks with the United States, effectively quashing suggestions for a breakthrough one-on-one dialogue on the nuclear standoff and potentially other issues.” Supreme Leader, Ayatollah Ali Khamenei continues to make it clear that Iran views America as its most detested enemy.

The other piece of news that day was that the USS Harry S. Truman, an aircraft carrier, would not leave for the Persian Gulf as part of the Department of Defense’s two-carrier policy that has been in effect for the past two years. The decision was based on the sequestration expected to go into effect that would cut $4 billion over the next six months, the last half of fiscal year 2013.

Secretary Kerry will be a reliable hand puppet for President Obama. Recall that, during the 2009 protests in the streets of Tehran, Obama offered no support whatever to the Iranian people, saying instead that he didn’t think the U.S. should “meddle” in its internal affairs. In effect, he abandoned the Iranians to further tribulations.

Obama did the same when he over-ruled his entire state, defense and intelligence community by refusing to arm the insurgents in Syria, a major ally of Iran. A Wall Street Journal editorial said, “Syria is showing how doing nothing has costs of its own. By overruling his advisors, Mr. Obama has prolonged Syria’s civil war, increased regional instability, and delivered a strategic gift to Iran, the main enemy of Israel and the U.S.”

Kerry’s foreign policy as chairman of the Senate’s foreign relations committee was that the United States must be “respected” when negotiating with dictators. Iran has never shown any respect for the U.S. It has, in fact, a long history of supporting terrorists that have attacked U.S. embassies. It recently sent its president, Mahmoud Ahmadinejad, on a mission to Egypt to establish better relations since it slid into the control of the Muslim Brotherhood.

Whether it is Iran, Egypt or anywhere else in the Middle East, Africa and other parts of the world, under Obama the U.S. has been steadily withdrawing from showing any overt support for opponents of tyranny whether it was providing missile defense in Poland or its “lead from behind” approach to efforts to overthrow dictators.

The timeline of U.S. blather about Iran would be amusing if it were not so deadly serious. In 2009 Obama said, “My expectation would be that if we can begin discussions soon, shortly after the Iranian elections, we should have a fairly good sense by the end of the year as to whether they are moving in the right direction…” The only direction Iran has been moving has been the acquisition of nuclear weapons.

By 2012, Obama was still talking about discussions with Iran. “We want them to demonstrate clearly in the actions they propose that they have truly abandoned any nuclear weapons ambition.”

Every U.S. administration has sought to open a dialogue with Iran and all have failed. At some point, one would expect those in office to draw some conclusions from this. Indeed, all the efforts of the United Nations, particularly that of its International Atomic Energy Agency, have been complete failures. At some point, Iran’s nuclear weapons program must be destroyed by military means and one suspects everyone is hoping Israel will do it for them.

There appears to be a complete lack of understanding that Iran’s leaders still operate with a seventh century mentality. One way to grasp this is a recent news story about the public amputation of a convicted thief’s fingers. It was broadcast on television. In addition, he had been sentenced to three years in prison and 99 lashes. A week earlier two men convicted of mugging a man at knife point were publicly hanged in Tehran from a pair of cranes. Such punishments are the norm in Iran. As in all authoritarian regimes, such public punishments keep the population in a state of fear.

A variety of sanctions on Iran has created internal problems, but has not deterred its drive for nuclear weapons. Unlike other nations, the factor of irrational religion-based beliefs makes Iran more dangerous.

In effect, the Obama administration policy toward Iran is little more than vague talk of negotiations that will never occur. Financial problems at home have triggered a drawdown of our ability to project power in the Persian Gulf and elsewhere in the world.  If history is a guide, this is likely to encourage increased Iranian aggression.

Whats the sense of watching the Crap-Sandwich tonight, He'll just blame the Republicans for his failure(s).... then Blame Bush.

That should tell you EVERYTHING you need to know about Obozo's SOTU address..
If you look up failure in the dictionary you'll find a picture of Barack Hussein Obozo.

Some public flogging might not be a bad idea to introduce here in the States especially for crimes against public safety. It is intolerable that some parks or streets can no longer by visited without fearing for your life. Bring back the public flogging for such crimes or rape. Problem in Muslim countries is that the VICTIM of rape is often beaten...

Sorry, Eddy, but public flogging is medieval and the reason is that we have come a long way toward a more humane concept of punishment in the West.

Alan, as I have repeatedly said, America needs to stop interfering and bring her troops home. Protect YOUR borders and people. Stop importing Muslims into the country. It's only America who loses: troops, reputation and standing. If Iran gets a bomb then what are the going to do? Who are they going to bomb? I think Saudi Arabia has more to worry about than Israel. For if Israel is wiped out, who is going to keep Muslims united in hate? They need Israel more than Israel needs them! It's also time for other countries to spend more of their own money in defending themselves and stop relying on the USA. The USA only got involved in WWII towards the end - they weren't needed before then. It should do the same today!

@ Lime Life: The Roman Empire fell in part because it was required to put soldiers into too vast an area and too great a cost.

Iran, however, represents a threat to the world and thus to the US.

I think most Americans at this point want to bring our troops home.