Did anyone notice that the estimated 35,000 who showed up for the anti-Keystone XL pipeline rally outside the White House on Sunday, Feb 17, were all bundled up against the cold? The temperature was about 25 degrees Fahrenheit. The Earth has been cooling—naturally—for sixteen years. 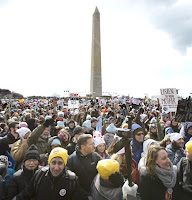 The pipeline which will not cost taxpayers a dime would be part of the existing 1,200 pipelines that traverse the same route. It would enable oil extracted from Canadian tar sands to be refined in America. Failing that, the same oil will be exported to China.

There are already 170,000 miles of pipeline in America, moving oil and natural gas to fuel our cars and trucks, warm our homes and apartments, and, in the case of oil, to be turned in the zillion uses of plastic and other products such as asphalt to pave our streets and highways.

The people who showed up and shivered through the rally lack sufficient brain cells to make the connection between the warmth to which they retreated and the energy that provided that warmth or the electricity that provided the light by which to read their anti-energy manifestos.

For an hour or two they listened as the Sierra Club and Natural Resources Defense Council spokesmen regaled them with an anti-energy, anti-jobs, and anti-wealth message that ignored the 20,000 jobs the Keystone XL pipeline is expected to generate, plus all the other jobs dependent on this source of energy. Not surprisingly, the AFL-CIO’s building and construction trade division has endorsed the pipeline.

In testimony before a House committee, delivery on Feb 13, Daniel Simmons, the Director of Regulatory and State Affairs for the Institute of Energy Research, addressed a hearing on “The Effects of Rising Energy Costs on American Families and Employers.” As far as I can tell there was zero media coverage, but here are a few of the facts he presented.

“It takes 307 days for the federal government to process a permit to drill, but only 27 days for Colorado and ten days in North Dakota.” Both states are reaping the benefit in terms of jobs and revenue generated while “energy production on federal lands is stagnating.”

In a nation that is $16 trillion in debt with trillion dollar annual deficits this runs counter to anything that makes any sense at all.

Just how much wealth is represented in the energy reserves the Obama administration to which has and will continue to deny access?

If you wondering why the U.S. is borrowing trillions from other nations and contemplating the sequestration of funds for both domestic and defense when it sits atop enough energy reserves to wipe out our debt, reduce the importation of oil from nations that do not much care for us, and has millions unemployed when our energy industries alone could employ many of them and encourage manufacturing that would employ even more, you are asking the right questions.

Instead, the Obama administration has wasted billions on the most unreliable and uncompetitive energy producers, wind and solar, while promoting electric cars that no one can afford or wants to purchase. At one point the President was ballyhooing algae—pond scum—as a potential energy source! This lies somewhere between criminal stupidity or deliberate harm to the economy. For the record, in 2011, wind power produced 1.2 percent of the energy used in the United States and solar power produced 0.1 percent. Without subsidies and mandates they would not exist.

What is truly astonishing despite all the lies we’re being told about energy, in 2011 the U.S. produced 23.0 trillion cubic feet of natural gas, making it the world’s largest natural gas producer. Naturally, the federal government is dragging its feet on permissions to build gas export facilities.

In 2011 the United States produced 5.67 million barrels of oil per day. It could be the world’s leading producer if the government would permit access to just those parts of the more than 41 million acres of land it owns in our name under which can be found a treasure of oil, as well as natural gas, and coal.

Instead, the nation is so badly mismanaged that, while the New Depression lingers on, the Institute on Energy Research estimates the worth of the government’s oil and gas technically recoverable resources are worth $128 trillion, about eight times our national debt!

We are all the victims of the most incredibly stupid Congress and the present administration whose single goal seems to be to impoverish as many Americans as possible so that the few remaining job-holders can be taxed enough to pay for their government benefits.

All of those who showed up are stupid tools and a direct result of the brainwashing that has been going on in this country for decades. On February 14 the Fox Business show Varney & Co. had Michael Brune, Executive Director of the Sierra Club, on as a guest. He misdirected questions posed to him, lied about green energy being cheaper than fossil fuels, and made the IRRESPONSIBLE statement that climate change is "destabilizing" the climate. At these rallies we have the clueless brain dead and they are led by liars who are either deluded and/or have a more sinister purpose.

The thing to remember about so-called "climate change" is the folks who are pushing it are more concerned with destroying Capitalism than they are with saving the earth. Read my blog at http://smallcraftadvisorychronicles.blogspot.com/

I hope they froze their arses off.