Spending Time in the Tenth Century 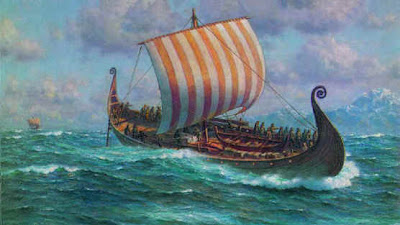 For the past week, I have been spending time in the tenth century—the 900s—that led ultimately to the concept of “Europe” as nation-states we know today as Germany, France, Spain, and Italy. Across the Channel, England, Ireland and Scotland were besieged by the Vikings who also attacked Europe along with the Magyars who ravaged Europe from the East.

My vehicle to the past was “The Birth of the West” by Paul Collins, a historian who takes the reader to the last century of the first millennium; a hundred years of chaos.

Though the early Catholic Church was the plaything of various warring parties, it was the glue of society, infusing all aspects of life despite being the plaything of warring “nobles”, men who sought property and power while providing protection for those under their control. Seen as the Dark Ages from which Europe would emerge centuries hence during the Renaissance, it was the many monasteries of the time that would preserve the knowledge of the ancient Greeks and Romans to pass it on to future generations.

All were united against the spread of Islam that began in the seventh century and which controlled Spain and would be stopped in France in 732 and later outside of Vienna in 1683. It is a battle that rages today as the jihad of the past is being played out in our times. It was a brutal century that concluded the first millennium and one in which the Christianity triumphed over the paganism of the era, eventually converting the Vikings and Magyars.

Throughout the tenth century, life was essentially local with few, except for pilgrims who traveled to Rome and other sites of veneration. Most people did not travel much farther than sixty miles or less from where they lived. One was considered an adult by age 15, people wed by their twenties, and the average life expectancy was 35. The vast bulk of the population was tied to the land, fearful of venturing out at night, entering the forests only to secure wood for construction and to warm homes that were often shared with their livestock.

The “nobles” of the time had rare exceptions of those who encouraged literacy and learning, but most were just warlords. “With insecurity reigning everywhere, people looked to magnates and local warlords to shield them from rapine, brigandage, land-grabbing, feuds, and atrocities by neighboring warlords on the lookout to extend their territories.”

Bad weather could kill crops and result in widespread starvation, Pestilence would take still more lives at a time when healthcare was non-existent. The weather was perceived as in the control of supernatural forces and in this regard current fears that humans are affecting natural events such as hurricanes reflects the ignorance that infused the people of the 900s. “For us the natural world is ordered, self-sustaining, and explained by science; for them it was chaotic.”

Violence was the order of the day. There was no authority present as in the case of today’s nation-states and those who ruled large areas were dependent on local nobles to enforce whatever passed for the law. “Kings were personal, rather than territorial, rules…their authority became real only when they were present…a ‘kingdom’ as a geographical entity was an abstraction that made no sense.” People did not see themselves as French or German since these nations did not exist.

Collins noted the “extraordinary personal nature of violence in the tenth century. People attacked each other individually or clan attacked clan, and the duty of payback was widespread. Battles were horrid hand-to-hand combats fought with axes and other weapons that inflicted lethal wounds. To the extent that our local news begins with the murders de jour it often struck me while reading the book that we have not progressed much and the terror used by today’s Islamists is not much different than that of the past; an instrument to advance their religion, fought as often among each other as against all others.

“The millennium saw the beginning of long-term social change that would eventually become Western European civilization. After a century or more of the disintegration of central government and authority and the reality of almost constant low-level warfare…people started to feel generally safer from external attack” represented by the Vikings and Magyars.

“The church was the cohesive driver that bound together the disparate elements that make up our cultural inheritance and was the energy that drove the process forward.” In our times, religion, Christianity, has been under attack as our nation as has accepted abortion has the law of the land, killing millions in the womb, and as same-sex marriage undermines the ancient tradition of a norm that is the bedrock of society. The threat of life under Sharia law threatens the whole of Western civilization.

In this regard, the first century of the second millennium mirrors much of the threats that existed over a thousand years ago in Europe.

Yes, it does seem that a "New Age of Anarchy And Murder" 10th century style is throwing its dark shadow over Western Civilization in the 21st century, and if I didn't know my history as well as I do, I'd say the game is pretty much over for the West.

But I know this 2,500 year old West World is a tough old bird that often takes a lick'n from the barbarians of this planet, but keeps on tick'n.

"the early Catholic Church was the plaything of various warring parties,"
What a great sentence! I love it. This notion solves so many of our perceptions about Christianity being the most bloodthirsty of all religions over time.
Thanks.