Harry Reid is Killing the Senate 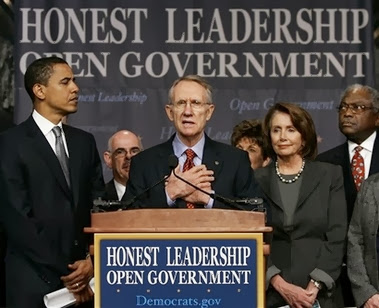 
In his 2005 book, “The Most Exclusive Club: A History of the Modern United States Senate”, Lewis L. Gould began by noting that the Senate was intended “to provide a legislative check against the potential tyranny of unrestrained majority rule.”


“The Framers of the Constitution envisioned a Senate that would function as a wide and judicious check on both executive power and the House of Representatives. They did not imagine a body that would act as a rubber stamp for an incumbent president. Nor would they have been pleased to see the Senate so focused on allocating federal appropriations to contributors and constituents.”


By 2005, Gould had concluded that “the Senate had become more often an impediment to democratic government rather than a place to express sober second thought on national priorities.”


Nearly a decade ago, he concluded that “A profound sense of crisis now surrounds the Senate and its members. Critics allege that it is an undemocratic place where the national interest received only fitful attention.”


On January 8th I happened to watch CSPAN as the Senate Republican Leader, Mitch McConnell, addressed the problems that were worse than even when Gould was writing about the Senate. The subject of his address to fellow Senators was “Restoring the Senate” and it received little or no media coverage.


Rule changes instituted by Majority Leader, Harry Reid, had turned the Democrat-controlled Senate into the rubber stamp the Framers had feared. It was Reid and then-Speaker of the House, Nancy Pelosi, who had pushed the Affordable Care Act—Obamacare—through both houses in 2009; a 2,000-plus-page bill that was famously voted upon by Senators who had not even had time to read it, let along take the time to debate it. By 2010, voters returned control of the House to the Republican Party.


Obamacare had given rise to the Tea Party movement and the growing numbers of independent voters in the 2014 midterms will likely return power in the Senate along with voters unhappy with Obamacare and the President’s preference to rule by executive orders to bypass Congress. These days, in addition to Obamacare, the Tea Party movement is devoted to ensuring that the Constitution is not ignored.
McConnell, addressing the members of the Senate, said, “even if you’re completely at peace about what happened in November, even if you think it was perfectly fine to violate the all-important rule that says changing the rules requires the assent of two-thirds of Senators duly-elected and sworn, none of us should be happy about the trajectory the Senate was on even before that day or the condition we find it in 225 years after it was created.”
Kimberley A. Strassel, a columnist for The Wall Street Journal, was much freer to address the problem. In a Jan 14 column, she wrote “The popular judgment that Washington’s dysfunction is the result of ‘partisanship’ misses the crucial point. Washington is currently gridlocked because of the particular partisanship of one man: Senate Majority leader Harry Read. And Republicans are warming to the power of making that case to voters.”


Noting that the 113th Congress is often called the least productive in history, Strassel pointed out that “The Republican House in fact passed more than 200 bills in 2013. Some were minor, and others drew only GOP votes” but “the laws all went to die in Mr. Reid’s Senate graveyard.”


“Mr. Reid took over the Senate in early 2007 and it functioned just fine in the last two years of the Bush administration. It didn’t suddenly break overnight. What did happen is the Senate Democrat’s filibuster-proof majority in the first years of the Obama administration—when Mr. Reid got a taste for unfettered power—and then the GOP takeover of the House in 2011.”


"That is when the Senate broke, as it was the point at which Mr. Reid chose to subvert its entire glorious history to two of his own partisan aims. Protecting his majority and acting as gatekeeper for the White House. Determined to protect his vulnerable members from tough votes, the major leader has unilaterally killed the right to offer amendments…Determined to shield the administration from legislation the president opposes, Mr. Reid has unilaterally killed committee work, since it might produce bipartisan bills.”


“Here’s how the Senate ‘works’ these days,” wrote Strassel, “Mr. Reid writes the legislation himself, thereby shutting Republicans out of the committee drafting. Then he outlaws amendments.”


In addition to a President who is seen by more and more Americans as a liar and an incompetent, they are often unaware of the critical role that Harry Reid has played in thwarting the normal process of the Senate to debate—and amend—legislation. While Obamacare is the President’s legacy legislation, it was created in the Senate, a body which does not have the Constitutional right to initiate legislation that imposes taxes, an authority granted only to the House. And the Supreme Court ruled that it was a “tax” and permitted its implementation!


In his address to the Senate, McConnell said of Obamacare, “The chaos this law has visited on our country isn’t just deeply tragic, it was entirely predictable…the Senate exists to prevent that.”


Harry Reid is killing the Senate and only American voters can save it by replacing the Democratic Party majority there.

The Founding Fathers made a couple of mistakes. Now don't take me wrong, they were great men and visionaries beyond compare, but when there were no TERM LIMITS set for Senators, Congressmen and Federal judges, that was a total lapse in judgment..

The founding fathers intended to have a balance of power, so the House was to represent the people and were directly elected by the people. The Senate were to represent the interests of the states, therefore were chosen by the states to be their ambassadors to the central government.

None of this would be occurring if the 17th amendment hadn't destroyed the balance of power. Repeal the 16th and 17th amendments and everything will start to fall back into place and decentralize the power garnered by the federal government, judges will be thwarted, bureaucracies will be held in check, if not eliminated. If that happened I wouldn’t be surprised to see the elimination of the Commerce, Education, Energy, Housing and Development, Homeland Security, Health and Human Services, Labor, Interior, Transportation and Veteran’s Affairs. Veteran’s could be an agency of Defense. The EPA and Wildlife services under Interior could be transferred to Agriculture, and then all three of them should be slowly dismantled and their responsibilities turned over to the states.

Harry Reid has always made me think of a James Bond super villain with that soft, yet very threatening voice, I can almost picture him as Ernst Stavro Blofeld with his pet white cat on his lap, an evil genius with aspirations of world domination.

Indeed, Harry Reed is the dictator of the U.S. Senate who, like all Senators, wants to be the First Man In The Republic.

The smart money says this will never happen, as Number One Obama has a much better position and aspirations, no doubt, ideas of being President For Life.

Of course, the downside to all this dictator-wanna-being is that someone with Nationalist American views may slide into the White House and exercise those dictatorial powers created by the Left to destroy the Left.

In America we have many Oliver Cromwell king destroyers in waiting.

Be careful what you pray for - O Powerful Ones - because your prayers may be answered.