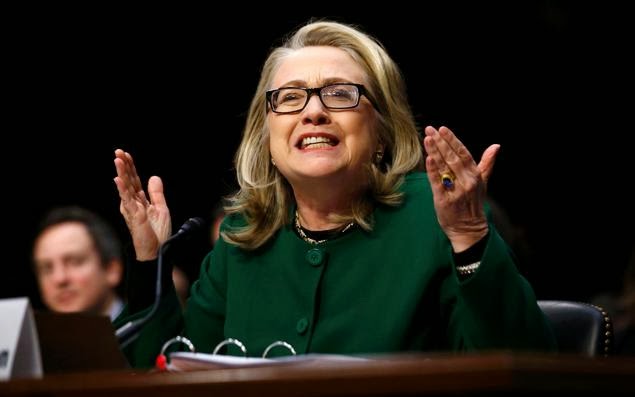 
“It’s time for a new beginning, for an end to government of the few, by the few, and for the few…and to replace it with shared responsibility, for shared prosperity”


“(We) …can just let business as usual go on and that means something has to be taken away from some people.”


“We have to build a political consensus and that requires people to give up a little bit of their own…in order to create this common ground.”


“I think it’s time to send a clear message to what has become the most profitable sector in the entire economy that they are being watched.”


“I certainly think the free market has failed.”


It was Hillary Clinton. Over the years, Hillary has made it clear that the redistribution of wealth—communism—is central to her beliefs and that her regard for capitalism and the free market economy of America is nil.


The election of Hillary Clinton would be an extension of the two terms of Barack Obama and, if possible, worse.


There are moments when a politician’s opportunity to win elections passes—often unnoticed at the time.  I think that time was 2008 when Hillary lost the Democratic nomination to an unknown Senator from Illinois who offered “hope and change.”


Eight years later, having served as his Secretary of State, she will share his growing disapproval as Obamacare unfolds as the perfect namesake of the worst President the U.S. has ever known. And then, of course, there is their shared Benghazi scandal.


For these reasons, I believe Hillary will decide her time has passed and elect to avoid the ordeal of a presidential campaign even if the Democrats gave her the opportunity.


Her long career in the public eye has been filled with scandals and failures, not the least of which was her early advocacy of “HillaryCare.” When her husband was President, she was put in charge of developing a plan to take over the healthcare sector despite the fact that she was not an elected official, but merely his wife. It was overwhelmingly rejected.


The most astonishing thing about the 2016 elections is that the Party still regards her as the sole candidate to run for the presidency even as 2014 Democrats seeking reelection are fleeing the disastrous failure of Obamacare and the huge debt that Obama imposed on the nation. In addition, elements of the Party’s base, Millennials—younger voters—and Hispanics are among those deserting it while some are beginning to call for Obama’s resignation.


There is something so disconnected from the facts, from reality, about the Democratic Party that it suggests that those who remain within its numbers are deranged.


Some political pundits will be inclined to dismiss Hillary as too old to run, that her agenda would not stand up to examination, that she would be in effect Obama’s third term, or that her record as Secretary of State is littered with lies and failures.


Democrats do not vote based on such things. They vote out of a nostalgic attachment to its past, to its message of fairness and equality, out of concern for its false “war on women”, “income inequality”, and the accusations leveled against the Republican Party and the Tea Party movement. Democrats will be driven by the belief that it is time for a woman to be President, no matter how awful her qualifications or political beliefs.


This is also a belief of the nation’s leftist media and the momentum of news coverage about Hillary will be orchestrated by her. In the meantime, she will earn tidy sums giving speeches and receiving every leftist award that’s out there. No doubt there is a book in the works as well.


Hillary has left a long record of scandals in the course of her “public service.” The most recent was the lies about the killing of an American ambassador and three security personnel in Benghazi on the 2012 anniversary of 9/11. Most famously, under questioning she said, “What difference does it make?” Nowhere during the course of her service as Secretary of State is there a single major international treaty or significant accomplishment. Indeed, her tenure is marked by the severe loss of respect for America and its influence over foreign affairs.


The Clintons have always been about the acquisition of money to fund their lifestyle. In 1979 Hillary earned $100,000 profit on a $1,000 investment in cattle futures within the course of just nine months. She was guided to the windfall by a highly placed Tyson Foods connection. An investigation into her role as an attorney with the Rose law firm was stymied until its billing records magically appeared in her White House office, years after they had been subpoenaed.


Like Obama, Hillary never recalls anything involved with her past. She knew nothing. She was the victim of others around her. It’s all a right-wing conspiracy.


The real conspiracy has been the takeover of the Democrat Party by the far Left and its elected office holders who appear to have no regard for the decline of the nation thanks to their relentless spending and borrowing.


Hillary Clinton has been among the most relentless of all Democrats, concerned only with her determination to become the next President and for the acquisition of wealth that puts her and Bill firmly in the one percent of the extremely wealthy that Democrats and liberals defame.


A significant defeat of Democrats in 2014’s midterm elections will influence her decision. A lot can happen between now and 2016. Even the mainstream media’s fixation on getting her elected may decline. Stay tuned.

But you have to admit, the Libs love her, she is one of them and she's thought to be a Lesbian..

It's a wonder the DNC hasn't canonized her..

This afternoon I was watching Amazon streaming video mini-series named "The Dome" and one of the characters is a space cadet lesbian who is a dead ringer for Hillary Clinton.

I'm surprised in the first episode when the town discovered they were completely cut off from the rest of the world, and everyone was in the panic mode, this character didn't say,

"At this point what difference does a dome make? :-)