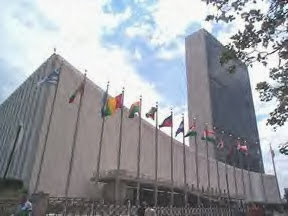 
I don’t write much about the United Nations because it is everything that it is not supposed to be. It’s supposed to be devoted to human rights and other noble and global aspirations. Instead it is a cesspool in which the worst of its member nations are sponsors of terror and other sins against mankind.
An article on Fox News reminded me of just how horrible, for the most part, the United Nations is despite its occasional usefulness. Anne Bayefsky writes extensively on the subject of human rights. She is a professor at York University, Toronto, Canada and an adjunct professor at Touro College in New York. She has been honored for her work and I rank her as one of the most impressive and important women on the international scene today. Her article took a look back at 2013 and what to expect in 2014.


Lacking any leadership from the United States, a role it has played in international affairs since the end of World War Two, the world is spiraling toward the prospect of a Middle East cataclysm between its secular, moderate population and the insanity of Islamic fascism. As Bayefsky noted, “The U.N. Security Council adopted four legally-binding sanction resolutions on Iran in 2006. American diplomacy managed to extract even Russian and Chinese support for international laws that state ‘Iran shall without further delay…suspend all enrichment related activities.’”


“And yet in 2013 President Obama decided to destroy that hard-won consensus, trash those legal obligations, and authorize Iran to continue enrichment activities.” The U.S. agreement was joined by six world powers, Britain, France, Russia, China and Germany, five of whom, other than Germany, are permanent members of the U.N. Security Council. Have they concluded that Iran cannot be stopped? Or should be allowed to join the nuclear club?


Iran has never ceased from regarding itself as at war with the U.S. and Israel. It has never ceased to threaten the existence of Israel. With nuclear arms and long-range missiles, it could destroy or inflict unimaginable damage to the nations who signed onto the deal.


This readiness to ignore the obvious can be seen as well in the composition of the U.N. Human Rights Council. In November, it elected China, Russia, Saudi Arabia, and Cuba as members. “Half the members of the Council are not even democracies”, noted Bayefsky, “and Islamic states hold the balance of power by controlling the African and Asian blocs.”


“In 2013, the Council criticized Israel more than any other state, almost twice as much as Syria and six times as much as Iran.” That is the very definition of evil and insanity combined. After three years, 130,000 Syrians have been killed in its war and millions have fled to adjacent nations, often having to live in rudimentary camps. It is led by a dictator, Bashar Assad.


U.N. Watch, an independent group, noted that in 2013 the General Assembly “adopted 21 condemnatory resolutions against Israel, compared to 4 on the rest of the world combined.” The U.N. Special Committee on Decolonization, charged with opposing the subjugation of peoples, “elected the murderous Syrian regime to a senior post.”


“The U.N. Conference on Disarmament in May 2013 made Iran its president.”


U.N. Watch noted that “UNESCO, which condemned no other country but Israel, and which was silent as Hamas bulldozed a world heritage site to make a terrorist training came, allowed Syria to sit as a judge on UNESCO’s human rights committee.”


These kinds of decisions and actions are part of a long litany of the United Nations’ behavior that renders its charter a meaningless piece of paper. Recall that the U.N.’s creation began in the United States as World War Two was coming to an end. The secretary general of the conference that organized the U.N. was Alger Hiss, a Russian spy who held high posts in the FDR and Truman administrations.


The United Nations is so entrenched in global diplomatic affairs that its vile actions cannot be lightly dismissed, especially in light of the way it is used by the major powers.


Nothing good can come of this and 2014 may provide testimony to that prediction.

I love it when people describe the UN as a cesspool...

Maybe they need and *Evinrude* to stir it up a bit..

Why is the US the only country to defend Israel?

@RBM. Because it is the only democracy in the Middle East and because it has been a good ally. Its intelligence capability has proven very useful to the US over the years.

#Fred. That was the only "nice" word I could think of to describe it!

The US should resign from the UN. Kick them out of NY and let them move to Iran. Think of the money we could save. Sadly that will never happen with Obama in office.

The UN is similar to President Obama in this respect: if either makes a statement, you can assume the opposite is true...period! I am so tired of the foolishness they display. Everything in your article is true, as is evident to those who pay attention.