Obama's State of the Union Speech Will Be All Lies 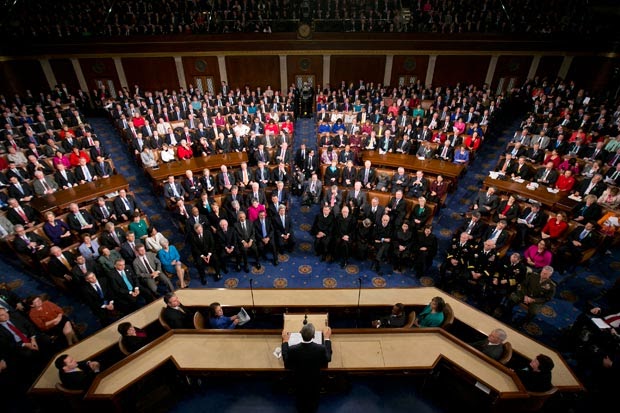 
On January 28, the President of the United States will stand before a joint session of Congress and lie to them and to all Americans.


The mainstream media will treat it as a serious presentation and make no mention of the lies.


Following the State of the Union speech (SOTU) there will be a formal response by a Republican spokesman. It will be very polite and not likely to strongly expose the lies and oppose the President.


The “low information” Americans will take Barack Obama at his word. Nearly half of all Americans who might listen to the speech or read about it are on some form of government dole or entitlement program. They are interested in food stamps, unemployment compensation, their disability status, and an older generation will understandably want to ensure their Social Security checks keep coming and Medicare will continue to underwrite their medical costs.


Whatever Obama has to say about the Affordable Care Act—Obamacare—will be a lie. His administration continues to lie about the number of those who have enrolled, but we know they are mostly the elderly while the younger generation wisely avoids it.


We live in a nation where more than 90 million Americans are out of work, cannot find work, or have given up looking for work. Anything Obama has to say about the economy will be a lie.


When Obama gives his speech, the total population of America will be 317,490,000 people. It is the third-most populous nation in the world with 82% residing in cities in suburbs as of 2011. Anyone who has driven throughout the nation knows that much of it is nearly uninhabited. A mere 2% of the population are the farmers and ranchers who feed the rest of us.


The two most populous states are California and Texas. New York City has the largest population of the nation’s cities. It just elected a Communist as its new mayor. He has announced he intends to raise taxes.


There are an estimated eleven million illegal aliens living in America and The New York Times reports that number may be growing. Previous efforts at amnesty resulted in not only endowing them with citizenship but their entire families, many of whom joined them from their home nations. At a time of high unemployment among natural born and naturalized citizens, increasing the population in this fashion will only add to the economic problems the slowest recovery in decades represents. In Congress Democrats favor an amnesty. Republicans are unsure of whether to oppose or accept it.


In addition to amnesty, the President will no doubt make some mention of tax reform. The reform the nation needs is the elimination of the income tax in favor of a fair tax based on consumption of products and services. You buy it. You pay a national sales tax.


No doubt the President will make some reference to gun control. He has been unable to get any legislation about it and has relied on executive orders to impose limits on the Second Amendment. Meanwhile, Americans are buying guns like crazy. It’s about self-defense and the prospect of a President who may not want to leave office. He will cite the Newtown slayings, but mass slayings in America have not increased in decades. It is not common, though it is always tragic.


It’s hard to predict how much time Obama will devote to “climate change”, but this greatest hoax of the modern era is very dear to him and the Democrats in Congress. A group of them are signing a letter to be sent to the heads of the network channels urging them to devote more airtime to lies about how carbon dioxide is causing the Earth to warm and poses a huge threat. The Earth, meanwhile, has been in a cooling cycle for seventeen years and many Americans recently experienced record-setting cold weather. More of them—though only about 23%--are beginning to express doubts about global warming. Duh!


The climate change agenda is being pursued outrageously by Obama’s Environmental Protection Agency which is issuing regulations intended to continue shutting down existing coal-fired plants that generate electricity and keep new ones from being built. It is a direct attack on the nation’s economy which depends on electricity. Whatever Obama says about it will be a lie.


No doubt he will make reference to his latest scam, income inequality. If there is one thing communists love it is class warfare. The best way to reduce income inequality is well known. It is a thriving economy that provides more jobs and higher pay. Meanwhile, there may be a passing reference to increasing the minimum wage, a great way to deny entry-level jobs to young workers and increase the cost of everything else to the consumer.


Obama is not likely to have much to say about foreign affairs. In general he has managed to reduce America’s role as an international leader for democracy, justice and human rights. We are running out of allies, especially in the Middle East where Israel, Jordan, and a few Gulf states remain friendly.


When I was a young man coming of age in the 1950s I could never imagine living in a nation whose moral structure was such that a million unborn children are killed every year by abortion. I would never have believed that some 40% of women would choose to be single mothers. Or that the divorce rate would reach 50% and more. I could never imagine young men and women graduating from college with huge debts in an economy where jobs were not only fewer, but subject to an Obamacare law that forces businesses to cut the number of hours they work, limiting their earning capacity.


This is not an America I envisioned, but it is one that Presidents and Congresses since the Great Depression of the 1930s whose government they have expanded to the point where many Americans regard Big Government as the biggest problem facing the nation. They’re right.

I'll be watching the speech. It would be helpful to have an applause meter present. When the cameras pan the audience I'll be watching who is applauding and vote accordingly.
A few hundred thumbs down and boos would be in order but you know we'll never see that.
Three more years of this clown...I don't know if we're going to make it.

Ron, he's already a lame duck and he knows it.

Excellent article as usual Alan, but you missed one important stat - by age 23, 50% of black males and 40% of white males have been arrested by the police.

On the other hand, maybe this is not surprising since it would appear about anything you think, do or say is a crime.

The only way I could listen to his speech is if a hear Allen or Mark levines comments after every run on sentence !

Stephen, Mark Levin will be much more entertaining! :-)

For some reason, I'm getting the acronyms SOTU and STFU mixed up.

I don't know if I will be able to watch. I usually begin to feel nauseated when he talks.

You wrote: "The reform the nation needs is the elimination of the income tax in favour of a fair tax based on consumption of products and services. You buy it. You pay a national sales tax."

The French territory of Noumea does not levy income tax. However, revenue must still be raised, and it is achieved via a tax on goods. (Not sure if services are taxed though). As a result, prices are incredibly high.

The high prices are not a problem if you are well paid. But for the low wage earners or the unemployed they spell real trouble.

I ceased being in favour of no income taxes after staying in Noumea for two weeks.

Instead, I am in favour of a low flat rate of income tax.

I agree with Albatross in that a low flat tax rate would be the best way to go.
Obama does nothing but lie so Alan is correct in saying the speech will be all lies. The one thing that we can count on from Obama is that he will always lie. You would think that America would by now have risen up and dumped this liar but too many people have been brainwashed by the liberal doctrine along with those who just don't even care what is going on outside of their little lives.

Hugh, I agree, a low flat tax rate would be best...better than a national sales tax that would hit the poorest hardest.

I make NO secret of the fact that I detest Obama and everything he says... I think he lies because that's all he has, he has NO *stand*, none that can be believed or supported, but unlike Joe *You Lie* Wilson, I won't apologize for my accusations against Obama, his anti-American Socialist self and the cretins that follow him..

The only way I could listen to his speech is if a hear Allen or Mark levines comments after every run on sentence !
global warming

Watch when POTUS belives he's said something significant, he will raise his head and jut out his lower jaw. Kind of like mugging for the camera. These are his talking points.