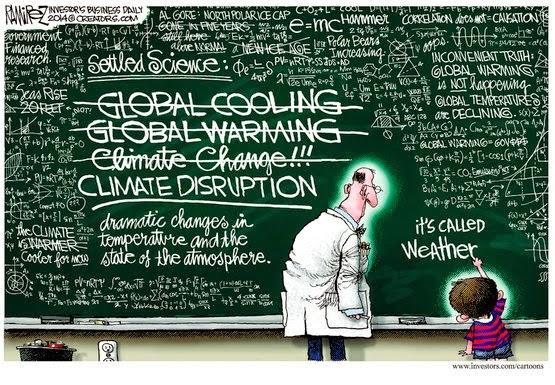 
John Kerry, our Secretary of State, continues to provide reasons to believe he is either too stupid to hold such a high position or too willing to tell lies to keep pace with President Obama.


Their views on “climate change” are so lacking in scientific fact that they are telling people we’re all doomed if we don’t abandon vast traditional U.S. energy resources and continue to  throw more billions at “renewable energy” that provides a very costly three percent of the nation’s huge energy needs. Meanwhile, nations in Europe, China, India and elsewhere are abandoning solar and wind, and building coal-fired plants.


At a Boston College commencement speech on May 19, Kerry outdid himself talking about climate change. “If we make the necessary efforts to address this challenge—and supposing I’m wrong or scientists are wrong, 97 percent of them all wrong—supposing they are, what’s the worst that can happen?” The worst is more wasted billions spent on something mankind can do nothing about and the administration’s continued efforts to control every inch of land in the U.S. and all of its waters.


In the May 27 edition of The Wall Street Journal, Joe Bast, the president of the free-market think tank, the Heartland Institute, and Dr. Roy Spencer, a principal research scientist for the University of Alabama, teamed out to write about “The Myth of the Climate Change 97%.” While demolishing this Big Lie, they noted that “Surveys of meteorologists repeatedly find a majority oppose the alleged consensus. Only 39.5% of 1,854 American Meteorological Society members who responded to a survey in 2012 said man-made global warming is dangerous.”


Obama’s and Kerry’s problem, along with all the other climate change charlatans, is that is the Earth is now into its 17th year of a natural cooling cycle based on lower radiation from the Sun, itself in a natural cycle. It is the Sun, not mankind that determines the climate of the Earth.


The Petition Project in which 31,073 U.S. scientists, over 9,000 of whom have a Ph.D. in a scientific field, participated says “There is no convincing scientific evidence that human release of carbon dioxide, methane, or other greenhouse gases is causing or will in the foreseeable future cause catastrophic heating of the Earth’s atmosphere and disruption of the Earth’s climate.”


“The purpose of the Petition Project is to demonstrate that the claim of ‘settled science’ and an overwhelming ‘consensus’ in favor of the hypothesis of human-caused global warming and consequent climatological damage is wrong. No such consensus or settled science exists.”


The Obama administration recently released a Climate Assessment report that was nothing more than a repeat of the lies the United Nations Intergovernmental Panel on Climate Change has been telling since 1983. They have all been based on computer models rigged to produce a global warming outcome. This process continues in several U.S. government agencies.


Following the last mini-ice age that lasted from 1300 to 1850, the Earth quite naturally warmed, most of which occurred prior to 1945. Meanwhile, the ice sheets of both the Arctic and Antarctica have been growing, particularly at the South Pole. The rise of oceans is measured in mere centimeters, posing no threat to polar bears or the island of Manhattan.


To Kerry’s question, “What’s the worst that can happen?” a recent Wall Street Journal opinion said that answer is “we spend trillions of dollars trying to solve a problem that we can’t do anything to stop: that we misallocate scarce resources in a way that slows economic growth; that slower growth leads to less economic opportunity for Boston College grads and especially the world’s poor; and that America and the world become much less wealthy and technologically advanced than we would otherwise. All of which would make the world less able to cope with the costs of climate change if Mr. Kerry is right.”


Mr. Kerry isn't right and that makes him and President Obama a national and a global problem.

The Obama administration is continuously producing disinformation about climate. Kerry's lies are disgusting. So are John Holdren's lies about the polar vortex posted on the White House web site. Obama's statement that these are Holdren's private opinions, not science, are laughably irresponsible. The most recent fraud I'm aware of is NOAA PMEL throwing out 80 years of ocean pH models and using a computer model to show a decline in pH. Obama is destroying the US economy and bankrupting citizens to artificially inflate the carbon trading market that he helped establish; a trading scheme more fraudulent than a Ponzi scheme that's transferring global assets to the .001% of the wealthiest while paying interest to Rothschild and Rockefeller monopoly bankers. The greatest fraud in the history of the world.