The Slow, Sure Death of "Climate Change" Lies 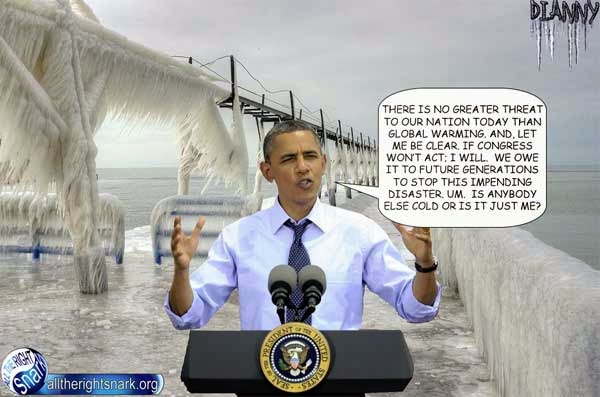 
Even though President Obama continues to lie about “climate change” and employs the many elements of the federal government to repeat those lies, this huge hoax is dying.


Obama is on record saying that climate change “once considered an issue for the distant future, has moved firmly into the present” and is “affecting Americans right now.” Climate change as studied by climatologists is measured in terms of centuries whereas the weather is what is happening today. It has been happening before and since the rise of civilization. Obama’s claim that “climate-related changes are outside of recent experience” and “have become more frequent and/or intense” is a lie from start to finish.


The White House recently released its latest “National Climate Assessment.” It is 841 pages of outlandish claims that reflect the lies generated by the United Nations Intergovernmental Panel on Climate Change. When you consider that the federal government spends an estimated $2.6 billion annually in grants for climate research, about the only beneficiaries are those “scientists” employed to further the hoax.


The UN’s IPCC was created in 1983 and has issued a series of reports whose sole intention has been to frighten people around the world with claims of global warming that are scientifically baseless.


The Heartland Institute, a non-profit market-based think tank, responded by creating the Nongovernmental International Panel on Climate Change (NIPCC) and by sponsoring a series of international conferences. The 9th conference will be July 7-9 in Las Vegas. That effort began in 2003 in cooperation with the Science & Environmental Project led by Dr. S. Fred Singer and was joined by the Center for the Study of Carbon Dioxide and Global Change.


I am an advisor to the Institute, having written about environmental and energy issues for several decades at this point. Calling on thousands of scientists around the world, in 2013 the NIPCC published the first of a three-volume response to the IPCC’s fifth assessment. This year, it has published a volume of Climate Change Reconsidered devoted to biological impacts, a 1,062 page opus. The NIPCC is an international panel of scientists and scholars with no government affiliation or sponsorship, and it receives no corporate funding.


Writing in the Financial Post in October 2013, Lawrence Solomon, the executive director of Energy Probe, a Toronto-based environmental group, noted that “solar activity is now falling more rapidly than at any time in the last 10,000 years.” The Earth’s climate is primarily a reflection of solar radiation or the lack of it. From 1300 to 1850, the Earth was subject to a mini-ice age. While the global warming hoax began in the late 1980s, Solomon noted that, in the 1960s and 1970s, the scientific consensus was that the Earth “was entering a period of global cooling. The media in those years was filled with stories about a pending new ice age.


It was only the intervention of the UN’s IPCC that changed the “consensus” to one of global warming. A cooling cycle that began around fourteen years ago could lead to another mini-ice age or the planet could be on the cusp of a full-fledged one. On average, the interglacial periods of the Earth have lasted about 11,500 years and we are at the end of such a period.


# “Atmospheric carbon dioxide (CO2) is not a pollutant.” Considering that all vegetation on Earth depends on it, it is not surprising that another conclusion was that the ongoing rise in the air’s CO2 content is causing a great greening of the Earth.


# As a result, “there is little or no risk of increasing food insecurity due to global warming or rising atmospheric CO2 levels and that terrestrial ecosystems have thrived throughout the world as a result of warming temperatures and rising levels of atmospheric CO2. Multiple lines of evidence indicate animal species are adapting, and in some cases, evolving, to cope with climate change of the modern era.”


# In addition, “rising temperatures and atmospheric CO2 levels do not pose a significant threat to aquatic life and that a modest warming of the planet will result in a net reduction of human mortality from temperate-related events.”


The irony of the latest NIPCC report, of course, is that it responds to the claims of global warming and carbon dioxide’s role at a time when the Earth is cooling. It makes one wish that all the talk about “greenhouse gases” is true enough to help us escape from the present cooling.


One thing we do know for sure is that the Greens talk of climate change has lost its grip on the public imagination and attention. As the cooling cycle continues, people around the world will be far more focused on increased evidence of massive ice sheets at both poles, on frozen lakes and rivers, on shortened growing seasons, and on the desperate need for more fossil fuels to warm our homes and workplaces.

Here in Australia the global warming lobby seems to have lost significant support. When voters are presented with real problems to worry about they quickly lose interest in the environment. Environmentalism is a luxury for the rich.

You know the only people "worried" about climate change is the people in the west. The rest of the world could care less. The environmental lobby when they propose stuff, it only affects the western based nations...all the others are exempt. I remember the Kyoto accords, the west would get hammered and all the other industrialized nations would get a pass. Nations like China, India and Pakistan were exempt. I call them "watermelons" Green on the outside and red inside.

@dfordoom - that's why our Greens party has pivoted to communist rhetoric after the budget - they've been unsuccessful using climate change as their Trojan horse into power - now they are outing themselves as exactly what they are - COMMUNISTS dressed in Green. The stupid gullible uni students are their bread and butter new little Marxist recruits. They're still too wet-behind-the-ears to see the truth. But eventually most do...

Speaking as a mathematician, the very idea that we can accurately measure the Earth’s global mean surface temperature let alone chart the change in it is ludicrous.

The best the warming alarmists can do is get reports of temperatures recorded at x number of weather stations worldwide, add all of the reported temperatures together, and then divide by x. Even if this could be done virtually instantaneously and repeated for an entire day -- which I highly doubt-- the result would not be an accurate measure of that day’s average temperature. And, if there is no good method now, just think how much more difficult the same problem would have been 100 years ago!

Put another way, just think of how the weather is reported where you live. In my locale, the temperature at the airport (which is located approximately 50 miles from my house) is reported as THE temperature for the entire metropolitan area even though my neighbors and I can all go outdoors and read different temperatures from our own thermometers.

Top that off with the big fallacy that carbon dioxide, a gas that is essential to life, is a pollutant and it all adds up to one BIG LIE!

In a nutshell, the allegedly "settled science" of "Global Warming" (aka "Climate Change" aka "Climate Disruption") is nothing more than an extreme example of GI-GO (Garbage In-Garbage Out).

@Everyday Mom: These profiles on liberal websites exist to raise doubts in the minds of those who read or hear the person profiled. I tale ot as a compliment.

You're in trouble now, Alan!

The environmentalist wackos have you down on their proscription list.

You do own a gun and have concealed carry?

Re: "everyday mom" and your "profile" on exxonsecrets.org, Alan: I agree that you should take it as a compliment -- you've so clearly disseminated so many facts that the gainsayers can are reduced to (wrongly) attacking your personal motives and character. May GOD remember you for good, since the "reproaches of those who reproach Him are now falling on you," Psalm 69:9.

How do you know what effect we are having on the environment unless you know what would have happened without us? (the negative control)

@Stephen. Because we know the Earth went through many cycles, warm and cold, before humans were even a factor on the planet.

Sure you can predict that our weather will go through cycles, however that doesn't inform you about the nature of future cycles (length, direction, amplitude etc.)
Here is another way to put my question. What if due to natural cycles or slightly lower solar radiation, the earth's temperature would have fallen 1 degree Celsius over the last fifteen years but the higher atmospheric CO2 levels counteracted that, leading to the observed no change in temperature? Could you call that anthropomorphic climate stability (ACS)? Or global warming vs. what it would have been? We can’t repeat the experiment and the science is extremely complex. We have no real way to be sure.
My best guess is that negative feedback mechanism will kick in after a while (if they haven’t already) to stabilize whatever is going on. In any event development of a commercial molten salt thorium reactor would make the entire argument mute and at the same time, provide energy for thousands of years.
However, my guess is that you would be hard pressed to find any 15-20 years over the Earth's history where the global temperature was as steady as it is now. That in itself is strange.