The Real State of the Economy--Not Obama's Lies 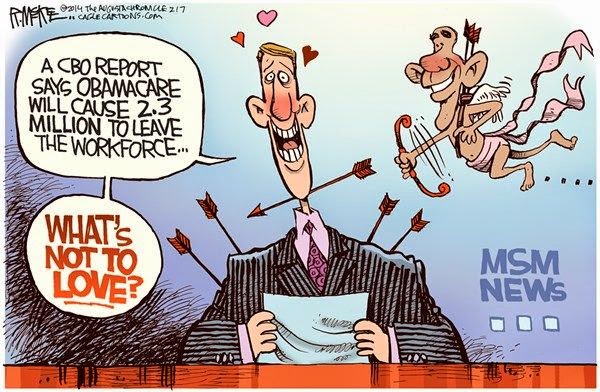 
My Father was a Certified Public Accountant and so is my older brother, now comfortably retired in Florida. I tell you this because I would be hard-pressed to balance my checkbook.


Even so, you do not have to be smart with numbers to know that the real state of the U.S. economy is pathetic these days. You can thank Barack Obama for that because, dear reader, he is utterly clueless regarding America’s economy; how it works, and what it needs to work.


Peter Ferrara, a Senior Fellow at The Heartland Institute specializing on entitlement and budget policy and a contributor to Forbes magazine, is one of the people to whom I go to understand the economy. In a May 2 edition, in an article titled “What Obama’s Growth Recession Is Stealing From Your Wallet”, Ferrara wrote “Restoring that booming economic growth and prosperity (of past decades) is the core of solving all of our nation’s problems, not income or wealth redistribution, or addressing ‘inequality.’  But President Obama is not on the path of restoration. The latest report on real GDP growth estimates this year’s first quarter at a pitiful 0.01%. This is in the 6th year of Obama’s Presidency.”


The Heritage Foundation’s chief economist, Stephen Moore, writing on May 1st in the National Review, asked, “What happens to an economy when you do just about everything wrong?” Here’s his list:


# Say you spend $830 billion on a stimulus stuffed with make-work government-jobs programs and programs to pay people to buy new cars,


# you launch a government-run healthcare system that incentivizes businesses not to hire more workers,


# you print $3 trillion of paper money,


# you shut down an entire industry (coal), and try to regulate and restrain the one industry that actually is booming (oil and gas).


“We made all of these imbecilic moves,” wrote Moore, “and the wonder of it all is that the U.S. economy is growing at all. It is a tribute to the indestructible Energizer Bunny that is the entrepreneurial U.S. economy that it keeps going and going even with all the obstacles.”  I want to argue with his use of “we”, but enough Americans elected Obama twice to justify it.


The Associated Press, much like most of the mainstream press, paused from protecting Obama in a May 2nd article that began “Despite the unemployment rate plummeting, more than 92 million Americans remain out of the labor force.”


As Harvard Ph.D., Jerome R. Corsi, a World Net Daily senior staff reporter, noted the same day as the AP article, “The Bureau of Labor Statistics (BLS) announcement that unemployment has dropped from 6.7 percent in March to 6.3 in April was partly attributed to some 800,000 workers dropping out of the labor force last month, reducing the labor participation rate to 62.8 percent, a new low for the Obama administration.”


When people stop looking for work, they are not counted as “unemployed.” Dr. Corsi put the actual unemployment rate in April at 12.3 percent! The numbers you read about from the BLS are “virtually meaningless.” They should just drop the “L” from their acronym.


As the Wall Street Journal opined on May 3rd, “The Americans who left the workforce include older workers who retired before they wanted to, millions who have taken disability, and others who simply don’t find the job openings to be worth the cost of giving up public benefits.”


You don’t have to be an economist to know the truth that has finally sunk into the minds of millions of Americans, many of whom are unemployed or know someone who is. Obama has driven the economy into the toilet. He has foisted trillions of debt on future generations. In order to vote for “the first black President of America”, what those voters and the rest of us got was a man with no experience running so much as a sidewalk lemonade stand.


I think those voters will want a change in November when the midterm elections are held. Between now and then, I want the Republican Party to spend a little less time on the Benghazi scandal and a lot more time telling voters their plans to revive the economy because, in the end, that is the single most important issue facing all of us.

I believe the single most important issue facing the US is the political division of the country into Right and Left ideologies, with no room seen for compromise, much less good reasoning and mutual respect. And there is no way to even begin to resolve this with the present President or the present leaders of the Democratic party, which in Obama's time in office has demonstrated a total commitment to insane "transformation", and demonization of any who criticize it now. Both parties are too willing to put our "inalienable" individual rights at risk, or to set them aside entirely; even "limited government" is too much, when it does that.

Good post Alan. You really said it like it is. And there is no "WE" to it.I myself and many others didn't vote for this debacle yet we're stuck with it. And I certainly hope the coming mid-term elections can and do turn this around.

It's obvious that Obama's not too smart.
But I will say he's loyal to the liberals, blacks, freeloaders and tree huggers that voted for him.

I don't believe obama is incompetent and failing. I think everything has been well thought out and is going exactly as he has planned and everything is falling into place for his next set of moves.

Fine post. Do you know if anyone has done a graph of the U6 (the real unemployment figure) for, say, the last 14 years? I think it would yield interesting results.

@David: I am sure such a graph exists, but don't know where.