Obamacare Will Kill Far More Than the VA Scandal 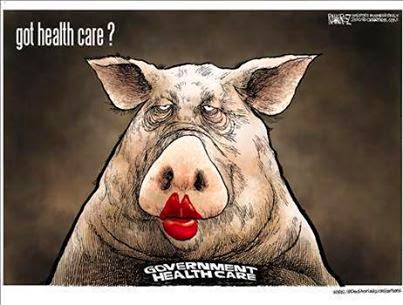 
The news that some forty veterans died whlle waiting to receive care from a Phoenix Veterans Affairs hospital—care that was denied because of bureaucratic chicanery—will seem small in comparison to the numbers of Americans who will die from the implications of Obamacare.


At this point, some nineteen VA hospitals are under suspicion of engaging in similar practices, but as large as the VA bureaucracy is, it will be small in comparison to what Obamacare requires. The original legislation that combined the Patient Protection and Affordable Care Act with the Health Care and Education Reconciliation Act represented nearly 2,700 pages.


The regulations that are being created to implement it will run to several volumes. By late 2013, the Obama administration had published 11,588,500 words of final Obamacare regulations. If looks can kill, that many words will surely kill. Too many people will be unble to get the care they need because there will be a regulation to prevent it.


What is making headlines now has long been known in other nations with national healthcare systems. It is about rationing, not dispensing care; if for no other reason that is why healthcare should remain in the private sector.
Unless a future Congress repeals Obamacare, the death toll will mount. There have been some forty or more pieces of legislation to repeal it passed in the Republican-controlled House of Representatives. No Republican voted for Obamacare when it was introduced.


What we know is that, while serving on the oversight committee, then-Senator Obama was aware of the VA problems before he ran for President. In 2009, as President, he promised veterans to fix the problems. How concerned is he in 2014? There has been a noticeable lack of public comment from a President famed for having something to say about everything that makes headlines.


Add the VA scandal to the long list of Obama administration scandals from the IRS to Benghazi, but it is Obamacare that has already been a monumental failure and, as we begin to receive news of those who will die as because a local hospital closed or because they lost the care of a personal physician familiar with their problem, it will emerge as the greatest scandal of his presidency.


On March 23, 2010 Congress passed the Affordable Care Act. By October, the Obama administration abandoned the long-term-care insurance program that was in the law. It was later formally repealed by Congress, but the changes that President has initiated since then ignore the fact that only Congress, as the legislative branch, has the power to make such changes.


December 2012 was the deadline for states to decide on running their own insurance exchanges; 36 states left all or part of the job to the federal government. In the lead up to the October 2013 launch of HealthCare.gov more delays were announced by the White House and the website turned out to be a complete disaster. That same month insurers notified thousands of policy holders that their health plans were not compliant with Obamacare and would be cancelled.


In effect, Obamacare caused hundreds of thousands of people with healthcare plans they liked to lose them, thus artificially increasing the number of “uninsured”. In April the White House announced that seven million had signed up for Obamacare. Kathleen Sebelius, Secretary of Health and Human Services, gave notice she was resigning. The figure cited by the White House is likely dubious.


In May, an article in The Fiscal Times reported that “A handful of state-run exchange websites—which cost nearly a half a billion dollars to build—still don’t work, nearly seven months after they first went live.” The Fiscal Times estimated that Obamacare websites had cost $5 billion and so many were not functional that the original plan to transition signups to them from HealthCare.gov was likely to be abandoned.


To mark the anniversary of Obamacare’s enactment, in March 2014 the American Action Forum released a report that the law’s regulatory burdens are twice as great as its alleged benefits. “From a regulatory perspective, the law has imposed more than $27.2 billion in total private sector costs, $8 billion in unfunded state burdens, and more than 159 million paperwork hours on local governments and affected entities.”

It’s rarely mentioned or reported, but the implementation of Obamacare will also require an increase in the number of people either full-time or under contract with the federal government. The highest estimate for new Internal Revenue Service hires is around 16,000 as the IRS has been put in charge of enforcing Obamacare. It already employs about 100,000 people nationwide which means there is one IRS employee for every 3,000 Americans.


In an April 4 Forbes magazine article, “Obamacare Shows America Suffers from a President Dangerously Disconnected From Reality”, Peter Ferrera, a Heartland Institute Senior Fellow specializing in entitlement and budget policy, concluded that the numbers of those insured by Obamacare were largely a fabrication or invalidated in some cases by data that the Health and Human Services Department released.


“Obamacare,” wrote Ferrera, “has been a major drag on the economy, preventing full recovery from the recession. Employers trying to avoid the costs of the employer mandate have reduced many full time jobs to part time jobs. Or that have frozen hiring, and the associated costs due to Obamacare. This is contributing to income stagnation and decline for the middle class, the working class, and the poor.”


L. Brent Bozell of the Media Research Center asked “How do we know Obamacare is failing? They’re burying the story. They aren’t in denial. They know the truth. They’re just choosing to ignore it.”


A Center analysis of the three network evening news broadcasts from January through March found only twelve full stories about Obamacare. “None of the networks dared to report the ongoing opposition of the American people to Obamacare” over that period of time, even when they were the ones doing the polling!

The picture of Hillary is a nice touch...