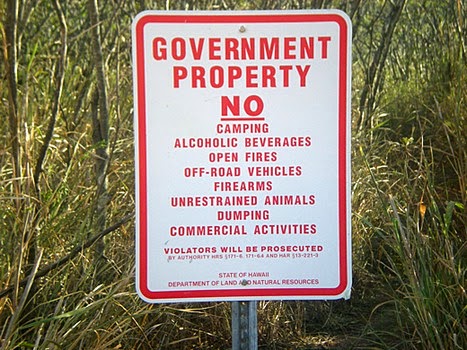 
According to a 2012 report by the Federal Research Service, “The federal government owns roughly 635-640 million acres, 28% of the 2.27 billion acres of land in the United States.


I suspect it may come as a surprise to many people that the federal government owns just over a quarter of the nation’s landmass and, other than land set aside for military bases and naval ports that may seem excessive. It is.


The drama that ensured when the Bureau of Land Management lay siege to the Nevada Bundy ranch over unpaid grazing fees called into attention the fact that the BLM oversees, according to a recent article in the National Review, “the largest piece of leasable real estate in the American West—245 million acres, an area bigger than the mid-Atlantic states and New England combined. The BLM is its landlord.”


In theory one can apply for a license or lease “to make productive use of this land” noted Travis Kavulla in his article, “Public-Land Colonialism.”  In practice “The National Environmental Policy Act of 1969 requires an excruciatingly complex process before even mundane land-use decisions can be made.” It is a regulatory nightmare for anyone who might want to create a mine to access coal or valuable minerals or extract oil or natural gas.


The process is subject to government policies, spoken or unspoken, to restrict access. A current case involves actions by the Environmental Protection Agency to stop the creation of the Pebble Mine project in Alaska even before a permit is requested. A May 12 Wall Street Journal editorial noted that “The EPA’s inspector general’s office last week announced it will investigate the agency’s February decision to commence a preemptive veto of the Pebble Mine project, a job-rich proposal to develop America’s largest U.S. copper and gold mine in southwest Alaska.”


The Obama administration has been devoted to stopping all kinds of projects that might generate jobs and revenue from projects like the Pebble Mine. Its opposition to the building of the Keystone XL pipeline is the best known example, but the EPA’s “war on coal” has closed many mines in addition to coal-fired plants needed to provide electricity.


The EPA is requesting jurisdiction over all public and private streams in the nation and this has been called “the largest land grab in the history of the world.”  So it is not just public lands that are affected, but private lands as well.


In an article on World Net Daily, Alana Cook pointed out that “The proposed rule tinkers with the definition of ‘navigable’ waters which was the central point of litigation in a battle between the Supreme Court and the EPA regarding the Clean Water Act.” The proposal would “allow the EPA in conjunction with the Bureau of Land Management, the Department of Energy and the Army (Corps of Engineers) to dictate on a never-before-seen scale everything from grazing rights, food production, animal health and the use of energy on private lands.”


This is, simply stated, Communism in which the government owns all the land.


As Craig Rucker, Executive Director of the Committee for a Constructive Tomorrow (CFACT) points out, “There is no engine on Earth as powerful at creating prosperity and improving the condition of both man and nature than free markets. There can be no free market without the right to property.” He warns that “Property rights are under siege.”


One of the BLM’s reasons cited for its actions against the Bundy ranch involved “endangered animals” and Rucker said, “Take away a person’s right to choose how to use their land and in effect you’ve seized that land.” The attack on private land ownership is led by the United Nations Agenda 21.


The government’s control over public lands and its grasp for control of the use of all private lands reflects the Marxist agenda of the Obama administration. It is so manifest that, in mid-April, officials from nine states got together in Salt Lake City to discuss ways to retake control of poorly managed federal lands.


There are federal laws that have been on the books a very long time that are intended to protect private property from the actions we have seen by the BLM and the EPA. One is the Federal Land Policy and Management Act of 1976, so this issue has been around awhile, but what is generally unknown is how vast federal control is.


In his National Review article, Kavulla noted that “In Montana, one county that is a traditional center of natural gas production has a whopping 53 percent of its subsurface minerals controlled by the BLM. Proposed resource management plans (RPM) in Montana “more than quadruple the land off-limits to ‘surface occupancy’ which makes oil and gas drilling virtually impossible. Only about one million acres of a ten million acre federal estate would be open to drilling activities under standard leasing conditions.”


America is under attack from within by federal government agencies that are striving to deny access to the greatest energy reserves in the world and to control the lives of ranchers and farmers whose work feed the rest of us.


It is time for the states to take back their land from the federal government and to oversee its use for the development of the economy, the security of the nation, and the protection of private property, the keystone of capitalism.

It may be worth noting that there are states MORE than willing to work in concert with Federal regulations, WA being one of them. Personal experience: Had a seasonal stream on 4 acres at one time. F&W said 'salmon stream' though all we ever saw was a couple of toads and a salamander or two WHEN there was any water. 'They' decided we needed to engineer a 30K bridge over the 'stream' (to replace the 3' original culvert). Well, 'they' got what 'they' wanted, private property taxed at development rates, but NO development.

Actually, the Federal Government does NOT own ANY land or "real property" outside of the 25sq mi. that is the District of Columbia. As pursuant to Article I, Section 8 of the US. Constitution, and further fortified within the 10th Amendment, the Federal Government is expressly prohibited from owning any real property outside of the confines of the "Seat of Government" (ie: The District of Columbia) and is expressly prohibited from exercise of right of eminent domain. As Jefferson argued, "A government with power of eminent domain will eventually obtain ALL land and real property." (paraphrase)

The Federal Government does not own any land, period (outside of D.C)

All lands belong to the people of the states in which the land resides. Each state can kick the Federal Government out of their sovereign lands at any time they see fit.