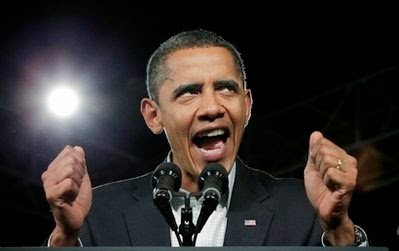 
In many ways, the November midterm elections are about surviving Barack Hussein Obama, the worst President this nation has ever had the misfortune to electing to that high office. His approval rating hovers around 47% and that means that nearly half of the likely voters still think he’s doing a great job.


If history is any guide, Democrats tend to not turn out in large numbers for midterm elections and we can only hope this holds true. Among Republicans, the Tea Party movement has pushed their candidates, incumbents and aspirants, to the right and that is a good thing. We have had our fill of RINOs (Republicans in Name Only).


In a recent La Jolla, California fund-raiser President Obama told the assembled Democrats, all members of the one percent wealthy enough to ante up to $65,000 per-plate to attend, that he thought Americans had developed the “wrongheaded” view that Washington wasn’t looking out for them and blamed conservatives who, he said, told people they’re “on their own.”


Was he including the millions on food stamps? And the millions on Medicaid? Others receiving college loans? Those receiving help paying their mortgage? Those using a free cell phone? Surely he wasn’t including those on Social Security. The benefits of Medicare have been reduced because its funding was cut by billions to fund Obamacare.


Obama blamed Republicans for the plight of the Middle Class, but we know that, other than telling lies, Obama excels at blaming everyone other than himself for the horrid economy that is struggling to recover after six years of his hand on the tiller.


And, please, let’s not mention the $17 trillion in debt he’s managed to run up in the process of wasting billions of taxpayer dollars on everything from his ill-fated “stimulus” to his “investments” in Green energy firms while delaying the Keystone XL pipeline that will generate jobs and revenue without costing taxpayers a dime.


That debt is going to have to be paid by ours and the next generation, but right now his job is to convince more Americans they are suffering from “income inequality.” And, yes, the federal government stands ready to redistribute the money from taxpayers to those who Nancy Pelosi has said should be grateful they don’t have a job so they can devote themselves to their hobbies.


This is the same President who just unleashed yet another report on the climate filled with various doomsday scenarios. Previous reports called “assessments”, largely drawn from the UN’s Intergovernmental Panel on Climate Change, were devoted to “global warming” until it became apparent to everyone that the planet was not warming thanks to a 17 year old cooling cycle that is still in play.


So “global warming” became “climate change” and now it is “climate disruption” because we all know how disruptive hurricanes, blizzards, tornadoes, forest fires, and droughts can be or how a rainstorm can spoil a picnic. The weather somewhere is always “disruptive.”


And this just tells you how stupid he thinks most Americans—at least those who still support him—are.


There is a slice of the population who most certainly are stupid. They are called the media and they are the same people who devoted the last six years to ignoring the scandals that keep popping up in an administration more devoted to crushing its political opposition and free speech than to solving the problems of the economy or responding to those it has encountered on foreign shores.


Obama’s solution has been to abandon the rest of the world as much as possible to a point where he is widely regarded by its leaders as spineless and/or totally unreliable. His recent appearance at the White House Correspondent’s annual bash was testimony to their blind love with the exception of those from the Fox News channel whom he referred to, tongue in cheek, as “a shadowy right wing organization.”  Well, we hope it was tongue in cheek.


As for Obamacare, the Heritage Foundation recently noted:


# Obama is backtracking for now on the enforcement of the individual mandate to buy insurance.


# Obamacare’s higher taxes and its subsidies that drop off if you increase your income are a disincentive to work hard to improve your situation.


# The employer mandate imposes new costs on businesses that undercut jobs and wages. It has been illegally and unilaterally delayed until after the midterm elections.


# The Foundation found that, between 2013 and 2014, the number of insurers offering coverage on the individual markets in all fifty states has declined by 29 percent.


And that’s just a few of Obamacare’s negative impacts on everyone’s earnings—if they have a job; 92 million no longer do—and on the increased premiums they are required to pay. Three quarters of those that signed up for new coverage are those who had plans that were cancelled!


Surviving Barack Hussein Obama has become the number one priority for all Americans and for the nation.

Alas, I have to take issue with you on one thing: Obama is the SECOND worst president in American history - that dubious honor belongs to one James Buchanan (1857 to 1861) on whose watch about half the states departed the Union.

The U.S. Civil War followed quickly and destroyed about half the real estate in the country, as well as the lives of over one million military and civilians.

However, Obama has over two years to start CW II, Lord knows he's working day and night to start an insurrection, and the be rightly titled, "The Worst President In American History."

So watch out James Buchanan, Barack Obama is moving up to you FAST!

His approval rating hovers around 47% and that means that nearly half of the likely voters still think he’s doing a great job.

It also means that nearly HALF of the likely voters in this nation are as nutty as a fruitcake..

If we believe the biased Leftist polls Obama has 47% approval.

It is a proven fact that the so-called objective polls are done by the Left to advance the Obama agenda of Progressivism Over All.

I'll wager the true Obama numbers are in the mid 30s.

Both you guys hit the nail on the head with these two comments.