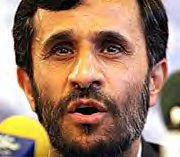 On September 23, Iran’s President Mahmoud Ahmadinejad will be speaking at the United Nations. He should be arrested.

This isn’t just my opinion, but that of a coalition including victims of genocide, representatives from Darfur and Rwanda, who will join Ambassador Richard Holbrook, among other distinguished diplomats, jurists, and scholars, at a conference in Washington, DC that same day. They will call for his arrest.

The charge will be the incitement to genocide.

Ahmadinejad has broken international law. His actions were condemned by the U.S. House of Representatives when, in June, it passed a Resolution (HCon Res21) “Calling on the United Nations Security Council to charge Iranian leader Mahmoud Ahmadinejad with violating the 1948 Convention on the Prevention and Punishment of the Crime of Genocide and United Nations Charter because of his calls for the destruction of Israel.”

A team led by Irwin Cotler, a Canadian Member of Parliament who was Minister of Justice and Attorney General of Canada, has concluded that Amadinejad’s rhetoric “constitutes a blatant violation of the anti-incitement clauses of the Convention on Genocide. Cotler will use the event to release the “Responsibility to Protect (R2P) Petition which calls on all States to bring Amadinejad’s Iran to justice under international law.

Prof. Gregory Stanton, formerly of the U.S. Department of State and the president of the International Association of Genocide Scholars, is a signatory to the initiative.

The arrest of Ahmadinejad would send a message to Iran's leaders and the despots of the world that they, too, would be subject to international law if they engage in similar acts of incitement.

Seize Ahmadinejad the moment he steps off the grounds of the United Nations. Arrest him and hold him for action by an international court of justice.

That action alone might prevent a second Holocaust and put an end to the genocide going on in Darfur, Sudan.

There is precedent to take such action. Slobodan Milosevic was indicted by the International Criminal Tribunal in 2001 for having incited the killing of some 200,000 Muslims during the war by the Serbs in Bosnia. He had, the court said, “command responsibility” as President of Serbia. He termed the action “ethnic cleansing”, a phrase that has entered into language describing genocide.

There is a catch, though. The United Nations has proven itself indifferent or incapable of taking any action against genocides as we already know from their failures in Cambodia, Rwanda, and currently with regard to the Sudan. It has failed to put a stop to Iran’s intention to have nuclear weapons.

And the United Nations is obsessively opposed to Israel, spending endless hours on resolutions condemning it while ignoring the actual horrors occurring elsewhere in the world.

That leaves only the United States that has the capacity to see Ahmadinejad brought to trial.
In 1989, during the previous Bush administration, the U.S. invaded Panama and arrested Manuel Noriega. A dictator in charge of its government, the U.S. brought him to trial for drug trafficking and he is in an American jail still today.

What prevents us from bringing Ahmadinejad to justice before an international court and before the court of world opinion? Nothing but the will to do it.
Posted by Alan Caruba at 2:22 PM

I still believe, and I think the US government also still believes, that Ahmadinejad was also one of the "students" that seized our embassy in Tehran in 1979.

By all rights, then, he should be arrested and put on trial as soon as he sets foot in the USA -- regardless of his diplomatic passport (since he violated them himself by taking the hostages).

I believe the only reason this has not already happened is that it would tick off the UN. I say, go ahead and do it anyway.

If we're lucky, maybe the UN will decide to move their HQ to Geneva or Nairobi. They're an organization run by and for the dictators of the world, so good riddance to 'em!