How Many Dead in Galveston? 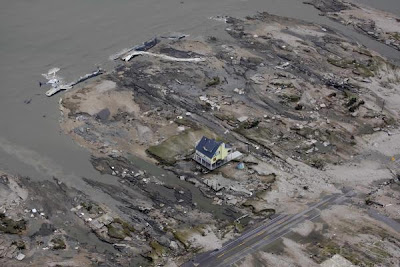 Here’s a question for you. Given the many people who refused to leave Galveston, Texas, how many died as the result of Hurricane Ike?

If you cannot find any reports than you are not alone. There is a virtual news blackout regarding casualties and deaths from the devastation the hurricane inflicted on Galveston.

The official death toll, according to an Associated Press, September 17, report was 49 “with most of the deaths coming outside of Texas.” The same report cited nine deaths in the Houston-area, but there was no word from Galveston, a place that currently resembles the surface of the Moon.

The most recent news report about Galveston that I could find was on the MSNBC website, updated as of Sunday. It cited two cases of Texans killed by the storm without reference to Galveston. It may have been too soon to know, but by Wednesday, there still was no word.

The hurricane reportedly killed more than 80 people in the Caribbean before reaching the United States. It was huge; some 500 miles across, with a storm surge that easily topped Galveston’s seawall. And yet, despite an occasional glimpse of the devastation it left behind, there is still no word of any deaths in Galveston.

“Homes and other buildings in Galveston and homes burned unattended during the height of Ike’s fury; 17 collapsed because crews couldn’t get to them to douse the flames. There was no water or electricity on the island…” according to the Sunday MSNBC report.

It seems unlikely, given the number of residents who chose to remain despite the order to evacuate, that there are no reports of deaths or of missing persons. The mainstream news media’s lack of interest, given the ferocity of the hurricane, is curious.

It could be that many of the dead were washed out to sea and a toll may never be known, but surely some of those who remained behind were killed and initial cleanup and rescue efforts should have yielded their bodies. If this is the case, it is not being reported.

One would think that either a Texas state agency or FEMA would make some kind of announcement, but so far the silence is beyond any explanation. One finds nothing on their websites.

Are government agencies reluctant to provide such information, given the backlash that occurred in the wake of Hurricane Katrina? Would a significant death toll in Galveston or anywhere affected by Hurricane Ike raise new questions about the ability of States and FEMA to respond?

Or did the evacuation and other efforts work so well that, miraculously, Galveston has few fatalities? We’re still waiting to know.
Posted by Alan Caruba at 2:03 PM

I live in Houston.

We already know FEMA is incompetent when compared to the local grocery stores, who are already restocked and open fur business.

Even the WalMart on the Seawall in Galveston is almost completely restocked, running on generator power, and ready to reopen before FEMA has brought in a single truck

Thanks for the feedback!

I've been wondering about this, too. Seems like there is a TOTAL news blackout on this topic. But why? What does the government have to gain by keeping civilian deaths a big secret? What's their motive?

What's their motive? If I knew that I wouldn't have raised the question.

Regarding Al's assertion that the Galveston WalMart is open, since he lives in Houston, I think we need some proof of that..though I hope he's right.

I too have been wondering. Seeing the before and after shots of places like Galveston and Bolivar combined with the reports that many did not evacuate one must assume some people died.

What is even more curious is that the media doesn't seem to be asking the questions.

I hope that the numbers of the people that ignored the evacuation was grossly over inflated and therefor few lives were lost ... but I have a sinking feeling that is not what is going on.

A follow-up report from Al:

The number will eventually be in the hundreds. They just aren't reporting on the number of bodies found on Crystal Island. I have no idea why. Friends with police scanners are hearing police officers and firemen calling a 'code 10' (dead body found) every few minutes from all over the Island. One estimate was of 200found on Monday alone.

And... the Galveston Wal Mart isn't open yet- it should be open by Saturday. It sits two feet below sea level, still protected by the Seawall on one side, but with no protection from Galveston Bay a half mile away. But, the Home Depot on the Island is open- they built up their parking lot 10 feet.

I just spoke with a Texas trooper from San Antonio last night (off-duty at a party), and he was telling me that there is a no-fly zone over the Galveston waters because a lot of bodies are washing up on shore, and they don't want any media reporting how many people actually died or taking any images of all of the bodies. I asked him if he knew why the media are quiet about the whole issue, and he too had no explanation.

My own reasoning is that it will look bad for the government so they are restricting media access. But the media's job is to expose the truth in spite of what the government tells them to do. They need to find a way to get out there and report on what is actually happening because the American public has a right to know!

Like rasero, I too heard from an off duty Texas Trooper, near Austin, that there were around 25,000 living in the area whom chose not to evacuate. Supposedly, they have found somewhere around 5,000 casualties so far and are missing 15,000. He could have been fluffing the truth to make the story better, but its still scary to think that there is some truth to what he said.

I am doubtful, based on my experience as a journalist, that so many dead would not draw a great deal of attention. The families of the missing would make a very big story of it. These figures you cite are likely the result of being passed from person to person and growing with each one.

My family lives in Galveston, and they had lost many, many friends. I do believe that you have misspoken about people "refused to leave." They tried, and they could not leave the island. Houston residents jumped the gun on their evacuations. The state did not run the evacuations as they had prepared. They were supposed to block oncoming traffic on the interstate while Galveston was being evacuated, and it did not happen. The roads were too congested to get on, and my family had no choice but to turn around and go home, so did many of their friends. My family members were the lucky ones.

Pam, I stand corrected. Thanks for your input.