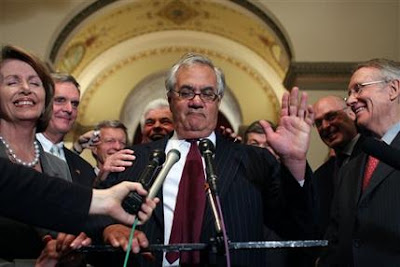 There is something genuinely sickening about seeing Rep. Barney Frank (D-MA), House Speaker Nancy Pelosi (D-CA), and others trying to stick President Bush and the Republicans with the blame for the financial meltdown that has put the American taxpayer in hock for the problem they created.

One need only read The New York Times, September 30, 1999 article by Steven A. Holmes, headlined “Fannie Mae Eases Credit to Aid Mortgage Lending.” Only it didn’t aid anything. Instead, it abandoned rational, prudent, established guidelines for lending; not the least of which is that you don’t make loans to people who are unlikely to repay them.

“In a move that could help increase home ownership rates among minorities and low-income consumers, the Fannie Mae Corporation is easing the credit requirements on loans that it will purchase from banks and other lenders.”

Holmes reported that, “Fannie Mae, the nation’s biggest underwriter of home mortgages, has been under increasing pressure from the Clinton Administration to expand mortgage loans among law and moderate income people and felt pressure from stock holders to maintain its phenomenal growth in profits.”

The man in charge of Fannie Mae in 1999 was Franklin D. Raines, a name that has come up in connection with Sen. Barack Obama as an “advisor” on housing issues. Another former Fannie Mae CEO, Jim Johnson, led Obama’s vice president search team.

In 2008, after a civil suit revealed that Raines had “manipulated earnings over a six-year period” with two others to enrich themselves. Raines agreed to pay $24.7 million, including a $2 million fine. In addition, he also gave up company stock options valued at $15.6 million. Between 1998 and 2004, according to a New York Times article, Raines and two others pocketed “hundreds of millions in bonuses.”

This makes the political campaign funding Fannie Mae/Freddie Mac gave Sen. Obama even more shocking given the fact that he reaped more than any other politician, $42,116 for every year he was in the Senate. It is worth asking why Sen. Obama received roughly four times more money than any other politician during the four years he was in the Senate.

Sen. Obama’s close ties to both Raines and Johnson are being largely ignored by the mainstream media as efforts are being made to make it appear that this is a Bush Administration scandal. It isn’t.

In 1999, Peter Wallison, a resident fellow at the American Enterprise Institute, predicted that, “If they (Fannie Mae and Freddie Mac) fail, the government will have to step up and bail them out the way it stepped up and bailed out the thrift industry.” If you believe the media, however, you would think this was the fault of the banking and investment communities, but both were responding to significant changes in loan arrangements introduced during the Clinton Administration.

As the 1999 New York Times article noted, “By expanding the type of loans that it will buy, Fannie Mae is hoping to spur banks to make more loans to people with less-than-stellar credit ratings.”

This was clearly a political ploy to secure the votes of Blacks and Hispanics by deliberately lowering loan requirements. Banks and mortgage loan companies were required to show that they had made these bad loans, thus undermining the stability of the entire financial network.

Why Sen. John McCain is not shouting this from the rooftops is another one of those campaign mysteries, but it is undeniable and is just one more reason why neither Sen. Obama, nor his fellow Democrats should be allowed to retain control of Congress and, potentially, gain control of the White House.

This bailout is necessary to restore confidence in the nation’s banking and investment communities, but it started well before the Bush Administration and is grounds by itself to remove all those associated with it from public office. That can be done in part on Election Day.
Posted by Alan Caruba at 11:55 AM