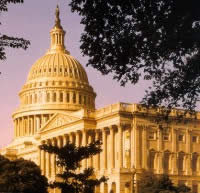 After listening to a week’s worth of “explanations” about why the financial system of the United States was in trouble, it occurred to me that, if we were China, a whole bunch of guys would have been hauled into stadiums in New York and Washington, D.C., and publicly executed.

Fortunately for them at least, we are not China, but what emerged from the chatteratti was the conclusion that, since everyone was to blame, no one was to blame. Guess who gets to bail out those who made predictably greedy and really stupid decisions? Everybody.

We are inclined to look back at previous administrations and think that their members of Congress were great statesmen and so much wiser, but even a glance over one’s shoulder reveals they were as avaricious and self-interested as the current bunch of boneheads. They gave us the Civil War, Prohibition, the Great Depression, and the United Nations, to name just four really bad events.

So why we should think that the present members of the quasi-criminal class we call Congress would not make a complete mess of the financial system, makes no sense. The most prominent aspect of modern era government is the way it has managed to expand into every area of life in America and, most particularly, the conduct of business, industry, and finance.

Congress knows little or nothing about agriculture, technology, science, medicine, and how to run a business, large or small. What it knows about is wasting taxpayer’s money on “earmark” projects to please the folks back in their district or state. It leaves wasting money overseas to the dictates of the State Department and assumes rightly that the military will do the same in the conduct of “nation building” projects.

If you wonder why Congress is forever holding committee meetings and inquiries of one sort or another, it is because these are the kids in high school who were never expected to grow up and be of any real use to anyone. They were the backslappers and glad-handers who, as often as not, ran for class office.

There are exceptions, of course. Rep. Ron Paul is a physician, though he has long since abandoned that profession in pursuit of saving us from ourselves. That is a losing battle.

This is why we have tended to look to state governors for leadership because, at the very least, they actually have to manage a real budget. We may be less inclined to do that in the future as we discover that the only thing too many of them are good at is running up more debt while killing energy projects because they think global warming is the most serious problem facing Kansas, New Jersey, or any state with a Democrat at the helm.

That includes California whose Governor is a Democrat in a Republican pinstripe suit.

The government will now step in and buy up all those mortgages that should not have been permitted if it had not insisted that people with no hope of making the payments, i.e., poor people, people living beyond their means, or just plain stupid people, had not decided they too should live in a McMansion.

In the process, I guarantee that the bailout legislation will have millions and millions tucked in there to do things like prop up Detroit’s auto industry problems that would not have occurred if government had not been busy mandating how cars should be built. This is the same government that, for thirty years, has been trying to destroy the oil industry.

Who is to blame for the financial mess? Apparently it’s you. After all, it’s your money that will be used to make things right again. Until the next mess.
Posted by Alan Caruba at 5:06 PM

Where is all of this $$ going to come from? I suspect that it will simply be printed, thus diluting EVERYTHING that we have tried to save for all these years. If they ever let go control of gold prices, I hope you have more metal than what's in your teeth. Pretty soon it'll be $25.00 bread and $100.00 circuses.

Yes, Dave. The dollar's value is being attacked from within and without. When it goes, what we call modern civilization will go with it. It's the glue of the world's financial system.

It could be worse Alan!

Jeremy, one hopes the snake charmers and charlatons who keep the "system" going will manage to do so.

They ALL knew it was fraud - those nolo doc loans, those 80/20 stack mtgs to avoid PMI, those inflated house prices, the sham applications - the mortgage brokers knew, but hey the deals were there, the money was available. Wall Street knew the risks were there but they still packaged them up and sold them as CDOs. The CDO buyers knew the risk but always bet the US govt would bail them out. I say let it fail.

Our politicians believe that the US govt can take on debt levels that can't even be charted against other countries debt levels. Is there any politician talking about downsizing government, FIRING govt employees, eliminating minority quota regulations in finance (which contributed to this mess)? Anyone? How about cutting off the jizya to foreign countries, mostly Muslim, that hate us? What about cutting off the UN and the hundreds of NGOs that are bleeding the US dry or plotting our destruction. How about firing 1/2 of the State dept? No one would notice, it would probably be better. George just pledged $1B to help Georgia rebuild. We are spending a billion to put water and sewers in Iraqi villages so Muslims WHO HATE US can get their cut. I live 10 miles outside a major US city and have well water and septic. Where's my free water and sewer project? Oh that's right, I'm not a foreigner, I'm a citizen. I get the bag!