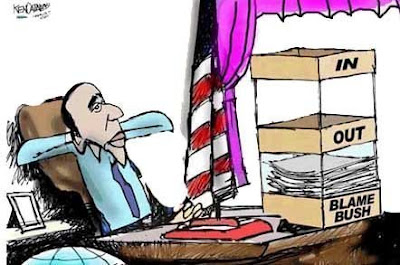 It’s taken barely half a year to make George W. Bush look good to a lot of Americans who experienced “Bush Derangement Syndrome” or, like myself, were critical of several of his policies while President.

I imagine Bush watching the evening news these days and just laughing as he watches Obama just “step in it” every time he encounters the same or some new problem with which Bush dealt.
On the issue of taxes, Bush was a dedicated tax-cutter. On the issue of spending, Bush never saw a spending bill he couldn’t sign until deep into his second term. He even advocated a prescription add-on to Medicare, raising its costs and hastening its bankruptcy.

And, of course, there’s the Iraq War which followed his payback for 9/11 during which he chased al Qaeda and the Taliban out of Afghanistan. The Iraq War began in 2003 and lasted six years to the point where we are drawing down forces or at least moving them out of the major cities to see if the Iraqis themselves can provide security.

A lot of the problems with the conduct of the Iraq War can be traced to Donald Rumsfeld, the former Secretary of Defense who just flat-out got it wrong too many times. On paper Rumsfeld had terrific credentials, but either he was terribly advised by his generals or he didn’t pay them proper attention or both. Wars cannot be fought “on the cheap” or won with too few troops.

Lastly, in defense of Bush, the housing bubble collapsed in October, one month before the 2008 elections following a long period of general prosperity. Indeed, the timing of the collapse has always struck me as very suspicious.

It followed a September 15th electronic run on U.S. banks that put the Federal Reserve in overdrive to stem its effects. By the time they closed the accounts involved, $550 billion had been withdrawn and, without prompt action, $5.5 trillion would have withdrawn and the economy would have collapsed.

As it is, under Obama’s guidance, the Recession he keeps reminding everyone he inherited is now raging from sea to shining sea thanks to idiotic decisions to throw billions at General Motors and Chrysler, both of whom were going to have to declare bankruptcy anyway, and then taking ownership in GM, an unprecedented action and one that runs contrary to a Constitutional prohibition on dispensing public funds to private enterprise.

Obama wasn’t content with that. Having inherited the panicky TARP funding effort, he allowed them to move forward without any insistence that they be used for the provision of credit. That one act alone would have helped stem the credit freeze that is forcing businesses to lay off workers by the thousands. Instead, the U.S. ended up with a sizeable ownership of banks and insurance companies.

If there is one thing that government is famous for, it’s the inability to run any kind of private enterprise. Amtrak hasn’t turned a profit since it began in 1971. With the advent of email, the U.S. Postal Service is in freefall and, if it weren’t for Fedex, nothing would ever be delivered overnight.

On the foreign policy front, the pathetic North Koreans feel free to fire off missiles, Iran’s president Ahmadinejad feels free to insult the President, and China says it hates us for the profligacy of Obama’s crazed trillion-dollar Cap-and-Trade Act and his proposed trillion-dollar healthcare reform program. If you really, really want to destroy what’s left of the U.S. economy, both of these proposals will shovel the last bits of dirt on what is left.

Obama isn’t just our nightmare. He is the world’s nightmare. He is a patsy willing to sit through a 50 minute diatribe against the U.S. by Nicaragua’s Daniel Ortega, a photo opportunity ambush by Venezuela’s Hugo Chavez, and top it off with a very demeaning bow to a Saudi prince. He signaled weakness with his Cairo speech. He has come out in defense of the deposed Communist ex-president of Honduras, putting him in the same company as Cuba’s Raul Castro and Senor Chavez.

He’s off to visit the Russians in a week and they will eat his lunch. Since the days of Harry S. Truman, U.S. Presidents have resisted the Russian’s threats, bluffs, and proxy wars. Obama is not made of such stuff and will probably agree to junk the entire U.S. arsenal of nuclear weapons in return for as much vodka and caviar the Russians want to sell us.

About the only thing I which we can count on will be Obama’s endless bleating and blaming of George W. Bush for all the problems he has encountered in a job he so desperately wanted.

Obama’s performance rating, according to Rasmussen, is heading south. It took just over a half year to reach negative status and by the end of the year, Democrats in Congress are going to be hiding in their offices and cloakrooms rather than be seen with him.
Posted by Alan Caruba at 9:24 AM

With Obama's decisions. the question we should ask ourselves is, will there be an America left after him leaving office? It looks like he and his insane asylum cohorts will destroy the dollar (the economy), weaken our defense, leave us vulnerable to our enemies, bring in total moral corruption. What dark gloomy person or book is he getting his advice from?
You talked about America being a "silly" nation, a nation of fools.
I was a toilet too. A lot of Americans can't judge between what is fiction and what is reality. Isn't it "silly" to gooble up every poop that is thrown at you from the media, because it's the cool thing to do?
I can relate to the movie "Matrix":The red pill will answer the question "what is the Matrix?" (by removing him from it) and the blue pill simply for life to carry on as before. As Neo reaches for the red pill Morpheus warns Neo "Remember, all I'm offering is the truth. Nothing more." Unfortunately, a lot of Americans have taken the blue pill and live in a "land of the unreal". One day they will wake up and find themselves in the nightmare.

A narcissist thinks it's the brightest bulb in the pack, despite low wattage and/or a defective filament. They never take responsibility for their own underachievement or for the consequences of their bad decisions, always blaming others for both.

I am aghast at the comments about The Obama…aghast I tell you. After all….didn’t he have two biography’s (or was it autobiography’s) written about him before he even became a U.S. Senator? Didn’t he get involved in community activism? Although he wasn’t in charge, and very likely didn’t have to balance the check book, never made a payroll, never had to find reliable suppliers for a business that he never started, never had to be his own human resources person and do the hiring for any company let alone one of his own, which he never started, never had to find the most cost effective health care plan for the company he didn’t own or start, and clearly he never had to negotiate a contract to the advantage of any company let alone the one he didn’t start, purchase, run or make profitable. Why would that give anyone reason to doubt his ability with that kind of experience. I am aghast I tell you… aghast!

Rich, you're a hoot. Thanks...wonderful comments!