Memories of Apollo and the Moon 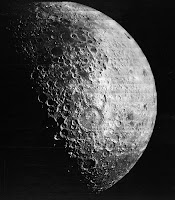 It tells us something about our limitations that the latest effort to send a new batch of nameless, faceless astronauts to the International Space Station was delayed several times by nothing more than some inclement weather bearing down on Cape Kennedy.

Oh yes, you can go to the Moon, but only if it isn’t raining.

I recall the excitement that President Kennedy’s announcement created when he said the U.S. would go to the Moon, but the real reason we went was to get there before the Soviet Union. It was about two empires butting heads and, of course, the U.S. won and the Soviet Union is no more.

So there is some irony to be had in the fact that, with the retirement of the current fleet of space shuttles, the only way to get to the Space Station will be via the Russian vehicle, the Soyuz.

There was even more excitement when Neil Armstrong stepped out of the Apollo lunar module onto the Sea of Tranquility. “One great leap for mankind,” said Armstrong who thereafter leaped into anonymity, rarely granting interviews because this courageous test pilot is painfully shy. It was left to the ebullient Buzz Aldrin, the second man to step foot on the Moon, to keep the memory alive.

The U.S. has never returned to the Moon. Why?

Because, other than the demonstration of American technological superiority, there simply is no good reason to return. There isn’t a damned thing on the Moon worth the bother. The Moon, it seems, is best left to the poets.

In truth, NASA’s unmanned probes have visited all of the solar system’s planets and the agency has most certainly engaged in a lot of serious science, but it is also true that there is not much reason for humans, so utterly dependent on Earth, to leave.

If a few rain clouds can delay a shuttle, travel to planets where water doesn’t even exist seems an odd, exorbitant, and futile project.

There is a scene in Tom Wolfe’s book, “The Right Stuff”, in which the initial Apollo crew demands that the lunar module have windows. They were all test pilots and they all understood the need to be able to visually orient the craft if anything went wrong. As it turned out, Armstrong had to manually fly the module to its landing on the Moon because its instruments went a bit cockeyed on him.

Another manned flight is estimated to cost somewhere in the area of $100 billion and, considering the way the present administration is running up the national debt, that’s still a lot of money. Strip away the romance of manned flight and the truth is that space probes have long since sent back more information about our little galaxy than putting some human space puppet in jeopardy.

What does the fortieth anniversary of Apollo II tell us?

It says we had more guts, more smarts, more need to prove ourselves to the world in 1969 than we do today.

It says we have an illusive, asymmetrical, new enemy on Earth who’s more interested in blowing up office buildings in lower Manhattan, trains in Spain, and hotels in Indonesia than reaching for the Moon.

In 2009, America needs to prove it will outlast a desert cult, keep pace with the rise of Asian nations, prop up a dying Europe, and get its own people back to work as soon as possible.

The Moon’s not going anywhere.
Posted by Alan Caruba at 5:33 PM

" U wrote,"It says we had more guts, more smarts, more need to prove ourselves to the world in 1969 than we do today."

Now more than ever America has so much more to prove- if by no other means than wars to show the power of freedom and democracy. It isn't guts. It has been the blood of our sons and daughters who put the red in red, white and blue.

I might not agree with all the content but The NY Times writers could not have written a better article-- well done.

I echo your sentiment. Normally, I'm all for science and exploration, but returning to the moon for pride or "because it's there" makes little sense right now, especially with the financial problems we face. We have an orbiting lab that gives us the platform we need to do whatever "space" research we want to do. From a "national pride" point of view, it's somewhat disappointing that we've let our space program decay to the point that we have to depend on the Russians to get us up there, but it seems to me that if there were any really promising science being done up there, we would have appropriated the money for a better vehicle a long time ago. Focusing on straightening out our problems here on Earth seems much more important right now. I will say that the spin-offs from our space program have been great for the world though. I'd like to think that we could do something to keep developing new and exciting technologies with real-world applications through some other channel. There is an exhaustive list of the great things our space program has produced here:

There is probably a similar list of technologies that have been spun off from the military as well, so perhaps we'll have to be happy with that for the next few years. I've heard that there is no funding for the ISS after 2016, and they plan to let it de-orbit shortly thereafter. Perhaps we can get our problems down here sorted out before that day comes. If not, then we would be well advised to focus our energies elsewhere. Until we have restored a sound economy and our national security, 4-wheeling around craters and hitting golf balls over the horizon will be a luxury we can't afford ....

Perhaps we have no need to go to the moon again, and maybe the exploration of deep space is better left to machines. The spirit that launched Conestoga wagons west on the Oregon Trail into an equally treacherous unknown was the same spirit that launched Apollo. I worked on that project and I remember the can do spirit and enthusiasm that permeated every day. When Grissom, White and Chaffee were lost on the launch pad, we grieved and then we persited and prevailed. lt will take that same spirit to prevail against our latest challenge. I for one, don't get the feeling that spirit is with us anymore. Maybe it's just lost for the moment and not gone from us forever. I hope.

Buzzg, you caught the theme of my post perfectly. One hopes a bew generation of Americans with recapture the spirit you and your colleagues had in former times.

Regretably, war is the way nations settle their differences and the way liberty is protected. We can all take pride in our military.

The space program was a brilliant way to bring us together with a common goal. It fostered pride and patriotism.
George Bush (either one) could have accomplished a similar goal by declaring that we would be energy independent by 20XX. Our technology is certainly capable.
The goal of today's leading elites, however, is to divide, not bring together. The language situation (at least in CA), the "haves" and "have nots", pitted against each other as if there were some heinous plot afoot to subjugate those "without". The race issue will never die as long as there are those on both sides who find advantage in the ghettoizing of America. Political correctness has paralyzed our once free speech. All these things divide and bring fear to the heart of man. The Nation's heart then dwells on the insignificant and we loose sight of our rights withering away.

aka "THE RIGHT STUFF!"

(some of us still have the spirit)