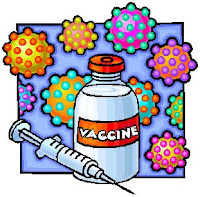 As a layman with no special knowledge about communicable diseases, I have nonetheless been struck by the drumbeat of scare mongering coming out of the World Health Organization and our government regarding “Swine Flu.” My reasoning is simple. Ordinary flu kills some 36,000 Americans annually and its victims are frequently the elderly and those in poor health.

I am not against vaccination and routinely get a flu shot every year, but I worry about all those youngsters who are required to receive several vaccinations in order to attend school. This begins in kindergarten and it takes no genius to know that their immune systems are not fully mature at that point.

Barbara Loe Fisher, a co-founder of the National Vaccine Information Center is a consumer advocate and author of several books including “The Consumer's Guide to Childhood Vaccines.” She has posted a videotape on the site that is well worth watching.

Regarding the Swine Flu vaccine, she asks “Will we have a choice?” regarding whether we or our children are required to be vaccinated with a hastily created vaccine specific to this form of the flu. Such a vaccine would not be subject to same standards of testing as others because it would be deemed a response to a serious, widespread pandemic. That raises the risk, particularly for children. And is there truly a widespread pandemic?

“What a lot of people don’t know is that true Type A or Type B influenza only causes about 20 percent of all flu-like symptoms that people experience during any flu season.” That means that “80 percent of all flu-like illness in a normal flu season is NOT caused by Type A and B strains of influenza contained in annual flu shots. And vaccine acquired immunity is temporary, while immunity gained after recovering from influenza is longer lasting.”

That’s good news for most people born before 1957. They may be naturally protected and have a lower risk of being infected because they have long lasting antibodies that help them resist infection.

I am increasingly skeptical of the claims being made by the World Health Organization and those in our government regarding Swine Flu. My suspicion is that it is just another type of flu, not unlike the 80 percent of influenza that is not Type A or B. Even if I am wrong, I worry more that the new swine flu vaccine that will be ready in October will not have been adequately tested. In 1976, when there was a similar flu outbreak, the vaccine ended up killing a lot of people.

Originating in Mexico in April of last year, one might reasonably expect to hear of a rising infection or death rate from Swine Flu there, but that is not the case. As of May 2009, Mexico’s health minister noted that there had been 908 tests on suspected cases and, of them, 397 turned out to be the Swine Flu virus. Deaths, however, numbered only 101. “Apparently the rate of infection is not as widespread as we might have thought,” said Jose Angel Cordova, the health minister.

For the past few years, some American doctors have been insisting that every child from six months old to age 18 must get an annual flu shot and some U.S. health officials want the first doses of the experimental swine flu vaccines to be administered in the schools.

In October, the National Vaccine Information Center will hold its Fourth International Public Conference on Vaccination in Washington, D.C. One of the issues will be that of “informed consent” and this is very important for any parent who does not want their child vaccinated against Swine Flu when those new vaccines may very well be unnecessary or represent a risk in themselves.

Out of a world population now exceeding six billion, as of June 2009 there were more than 35,000 cases of Swine Flu involving 163 deaths attributed to it, most of which occurred in Mexico, its point of origination. To this layman that hardly constitutes a global pandemic. It’s more like just another strain of flu virus.

I am beginning to tire of the monthly “crises” being declared by our government, particularly when it is clear that the solutions put forth at this point do not appear to be having any affect. Swine flu can be added to the list.
Posted by Alan Caruba at 8:51 AM

MONTHLY? I don't know what media outlets you monitor Alan, but it seems to me that this administration is generating them more like weekly, if not daily. We could call them the Crisis' du jour ....

I've said it before, and I'll say it again ...if hear the words "we must act quickly" from one more of these morons, I'm going to throw up....

In my defense, I did write "crises" as a plural of crisis...which, as we know, occur daily in the White House! :-)

Fear
I have to totally agree with Guy about the "fear" trip that the Obamanites are creating. It reminds me of the fable of Chicken Little, "The sky is falling" or another fable the boy who called "wolf" .
The Obama 'morons' are spinning so many fables and selling (unfortunately) them to the American public using the great 'fear' .
'Fear'! By the way, is the same tool (or tactic)that cults use. The cult leader Obama is spreading this gospel using this tactic.

I agree about the "fear" factor. Hardly do we have a conversation without the newest crisis being discussed. I also agree that "crying wolf" will cause the public to not respond to a real crisis.

If memory serves, the last time around with the swine flu, the vaccine killed more Americans than the flu killed.

I, too, an tired of the daily crisis. At some point an extremely frightened animal will turn on it's keeper. Obama and the Democrat/Socialists would do well to remember that.

I just heard that Florida is on the list for federal money for the shots. They'll have to drag me all the way if they make it mandatory- I won't get one. I haven't had a shot for over 20 years for anything, and don't plan on starting now. My son, thankfully has had some shots, but not as many as other kids his age because of homeschooling. I look for that to be in the obamanation crosshairs soon as well...
God Bless!

Once again we can see clearly that President Obama continues to implement the "Rules for Radicals" by Saul Alinsky. I wish people would read this book. In my opinion, we are observing rules eight and nine in action.
"8. Keep the pressure on", with different tactics and actions, and utilize all events of the period for your purpose.
"9. The threat is usually more terrifying than the thing itself."
The president's agenda is to change our country by social action, fear mongering, executive order, "Czars" and anything else those who control him can think of.
Our people, meanwhile are scurrying around, worried about the flu (now, anyway), Michael Jackson, and global warming. They never notice or see the real changes until it's too late to recover without huge effort. We have been dumbed down over time by an educational system devoted to the dialectic. The true dialectic group never reaches a final consensus, for "continual change" is an ongoing process: one step today, another tomorrow. To permanently change the way we think and relate to each other, our leaders must set the stage for conflict and compromise week after week, year after year. Dialectical thinking and group consensus must become as normal as eating. Eventually, people learn to discard their old mental anchors and boundaries -- all the facts and certainties that built firm convictions. They become like boats adrift, always ready to shift with the changing winds and currents.
We are pawns in the hands of the arrogant "inside the beltway" power brokers. Roosevelt continued what Wilson began, and today's bunch of socialists rejoice in the apathy of the average American.
(ref: "Rules for Radicals" by Saul D. Alinsky, 1971, page 128)

I don't know how I missed this entry, as I follow your blog regularly, but I happened across this one today and felt the need to comment. As a parent of a small child (I have a daughter who is less than a year old) I worry so much about the chemicals that the "American Academy of Pediatrics" deems safe, heck, forget safe, REQUIRED for my child. I feel like my child is the latest in a long line of guinea pigs for the government. When I was vaccinated in the mid 80's, vaccines started at 15 months, and we got about three different ones, roughly. And a few more when school started, and in six grade. Now they begin vaccinating children against Hep B, an STD at birth! (I am aware it is transmitted other ways as well, through work in healthcare and drug sharing, but none of these activities are partaken in by newborns!) And I am apalled to think that even more chemicals would be pumped into my child, who, if I vaccinated her according to the schedule put out by the CDC, she would have already received approximately 15-20 shots! Where does it end?! We are now mandating that children be vaccinated against chicken pox, whereas we used to wait for a child to come down with it, then expose the rest of the neighborhood to get it over with! We now have vaccines for HPV, which some states are mandating that girls get in order to attend public school! I am completely aware of the flu shot debacle (the flu shot is good for a short period of time, and is not always accurate to the flu that circulates that year, etc...), and that fact that more people die from the "regular" flu than of swine flu. I feel this is all government hype, a slight of hand to keep the American public from seeing what the other hand is doing. But it is also another tool for the government to test chemicals and pharmaceuticals on our children, and to keep pumping them full of chemicals. Kind of like they continue to pump their heads full of lies and brainwashing once they hit school age. I don't know what the answer is to all of this, but I fear for my daughter and the world she is to grow up in. I hope America opens up their eyes before Obama starts handing out the kool-aid, is all I can say.

boernerbunch, you just made my case! Thanks for posting your comment.

Not only is it abhorrent how much fear-mongering is going on about swine flu, but it is becoming more evident every day that the swine flu vaccine is just as dangerous if not more so than the swine flu!

The swine flu vaccine has caused many neurological disorders like dystonia, Guillain-Barré and more! Avoid it if at all possible and ignore the fear-mongering coming from the drug companies who just want to take even more of your money.