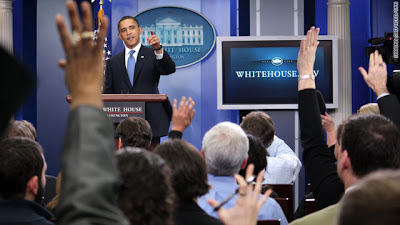 For anyone who follows energy issues, the President’s press conference on Friday was a breathtaking example of his ability and willingness to lie about America’s energy needs and reserves while obfuscating his administration’s relentless attacks on the nation’s coal and oil industries.

Even if we give Obama the benefit of the doubt by saying he is being “misinformed” by advisors, it does not alter the fact that he has, since the days of his campaign in 2008, made no secret of his intention to undermine America’s oil and coal industries while encouraging greater use of the two forms of energy, wind and solar power, that are of the least value in the real world. Neither would exist without massive tax incentives and subsidies or mandates that require their use.

Obama’s lies are so easily refuted one might think he would hesitate to tell them, but he is undeterred by the truth.

Claims that his administration is approving drilling permits were disputed by the Governor of Alaska, Sean Parnell, in a March 3rd Wall Street Journal editorial. “…Alaska and the Gulf states have been blocked from developing America’s oil by politically driven federal policy…In Alaska, an oil company can buy federal leases, spend over $3 billion in permitting and capital costs, apply for an air permit from the Environmental Protection Agency, and then wait for five years and still have no permit.”

Obama’s claim that his administration is looking at oil leases that have not been developed into drilling sites obscures the fact that, despite billions invested in them by companies prepared to explore and extract oil, his administration has pursued a policy of stalling such efforts.

In a March 11th statement by Thomas Pyle, president of the Institute for Energy Research said that “The CRS found that there is likely to be a combined 164.1 billion barrels or 8.5 times as much as the president alleges.”

It is Obama whose policies are driving up the cost of a gallon of gas at the pump. When one considers that U.S. oil is always cheaper per barrel than imported oil, Americans are being robbed, not by oil companies, but by White House restrictions on oil production.

This is a President who, in January 2008, campaigning for the office, told the San Francisco Chronicle that his cap-and-trade plan would cause electricity rates to “necessarily skyrocket.” The Secretary of Energy, Steven Chu, told the Wall Street Journal that same year that “Somehow, we have to figure out how to boast the price of gasoline to the levels in Europe” which was paying $10 a gallon!

As Nansen G. Saler, president and CEO of Quantum Reservoir Impact, Houston, asked in a March 9th Wall Street Journal commentary, “How do we go from where we are today—importing about 20% of our daily energy supply—to where we want to be in 2026, perhaps even (as) an energy exporter?”

In 1960, the writer Mary McCarthy was being interviewed by Dick Cavett and was asked which writers she thought were over-rated. She named three, one of whom was Lillian Hellman, a well known Communist sympathizer. McCarthy replied that “everything she writes is a lie, including the ‘and’ and ‘the.’ It sparked a great literary controversy, but I was reminded of it while listening to Obama.

This President, blathering about “energy efficiency”, electric cars, high speed trains, thousands of acres covered by wind turbines and solar farms, and all the other pipedreams that represent a Green agenda, is deliberately misleading Americans while his administration, instead of “winning the future”, is killing the future for America..

I suppose it wouldn't be fair not to leave a comment for you express my thoughts exactly.
The added insight gained by looking into the bio's of Mary McCarthy and Lillian Hellman (I knew very little of the two) was invaluable...even more so as I got side-tracked to General Risner who is referenced in a McCarthy read.

Just proves the old adage as practiced by the Germans, Russians and every other dictatorial regime. "Tell a lie and nothing but the lie long enough and it will become the truth in the people's mind"

As you state Alan, everything this guy throws out there is easily refuted, yet he goes on his merry way oblivious to the real world. In another post somewhere, there was a discussion which led to the great novel 1984 and the use of Newspeak and Doublespeak, both of which are paramount in this President's daily routine and as it was in the regimes I mentioned above.

I will not grant him an inch of slack as to being possibly misinformed. he is steadfastly following the principles he truly embraces as evidenced by his own words in his book and his actions!

My question is as it appears he decided to declare war on the oil companies and our own development of our resources years ago, what exactly is his end game once he is finished destroying our economy? All of the lies he has told us in the last 2 years such as "he believes in the free market system", etc. pale in comparison to the fact that he does the exact opposite after his lies. I can't even call it hypocritical anymore.

Killing the future...He has dang neared killed the future in two years. I am amazed at the following this man still has, he reminds me of the followers of Jim Jones....Obama is taking us down the same path of destruction, is it 2012 yet.

I find it almost unbearable to listen to this traitor ...

Not a thought origibal with me, but if Japam had been using solar panels of equivalent output, how many thousands of tons of lead would now be strewn about endangering cities and agriculture? Other pollutants?

Not to think of the amount of mercury from broken CFL bulbs.

>It is Obama whose policies are driving up the cost of a gallon of gas at the pump.

With an attitude like obviously he was the man for the job.

That's what they are! ( choose the EIA XLS)
http://www.google.com/search?q=gasoline+prices+europe&ie=utf-8&oe=utf-8&lr=lang_en

when are republican going to take responsibility for helping Bush murder millions and destroy america? clinging to the fact that there are some corrupt dems doesn't justify anything. you have to be one of the stupidest people on the planet to think illegal wars are ok. Becoming politically active after the worst president in american history leaves office shows your just a racist uneducated pig!

@kargenlewis: When Obama's own government agencies provide data that disputes what he is saying, it might be a good idea to pay attention to them.

Beyond that, you are so clearly a Liberal and therefore immunte to facts and reality, that I cordially invite you to buzz off.