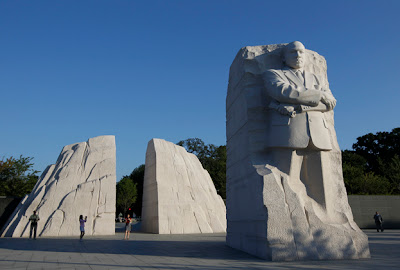 I was a young working journalist during the era of the Civil Rights movement and one evening I was covering a speech by Dr. Martin Luther King, Jr. on the campus of Drew University in Madison, NJ. I was accompanied by Vivian Braxton, a civil rights activist who said, “Let’s go backstage and meet him” when the speech was finished.

Backstage, Dr. King stood alone while others stood at a respectful distance, afraid to approach him, so overwhelmed by the power of his words and personality. Vivian, however, headed straight for him with myself in tow. My first reaction was that he was shorter than I had thought and my second was a smile that was an embrace.

I introduced myself as a freelance journalist who was there to cover the speech for a local black newspaper and Dr. King found that very amusing. We chatted briefly and I tucked away a great moment in my memory, never anticipating that he would fall victim to an assassin’s bullet or that, years later, a Washington, D.C. memorial would be created in his honor.

Opened to the public on August 19, a statue of Dr. King stands thirty feet tall and in an irony that boggles the mind, was carved in China, the work of a Chinese sculptor, working in an Orwellian, totalitarian society.

It is also one of the most hideous works of “art” imaginable for anyone who recalls the times and the character of a man who said, “I am not interested in power for power’s sake, but I am interested in power that is moral, that is right and that is good.”

The statue depicts a scowling figure, his face fixed with the look of every despot whose statue is intended to instill fear or awe in those who gaze upon it. His arms are crossed over his chest as if protecting himself or preparing to pass a harsh judgment.

It is hideous because it completely obliterates the gentleness of Dr. King, the heart that strove against injustice. The awfulness of the statue reminded me of another of his quotes, “Nothing in all the world is more dangerous than sincere ignorance and conscientious stupidity.”

I have no idea what the memorial committee had in mind when it sanctioned this statue, but I have little doubt that Dr. King would have been mortified by it. He was a man who, on that long ago evening on the Drew University campus, greeted Vivian and me with a big smile in the midst of a great struggle to secure the rights of blacks in America.

In these times in which Arabs in Syria, Libya, Egypt and Tunisia have put their lives on the line to overthrow their tyrants, Dr. King had anticipated that human aspiration saying, “Freedom is never voluntarily given by the oppressor; it must be demanded by the oppressed.”

So, now, on a four-acre site on the Tidal Basin between the Lincoln and Jefferson Memorials, a huge intimidating statue stands where a life-size statue would have permitted visitors to marvel at the power of love over hate, morality over oppression, and the struggle for justice that is the birthright of all men and women.

“Rarely do we find men who willingly engage in hard, solid thinking,” warned Dr. King. “There is an almost universal quest for easy answers and half-baked solutions. Nothing pains some people more than having to think.”

Dr, King’s life was devoted to making all Americans think about the kind of society, the kind of nation, in which they wanted to live.

“A nation or civilization that continues to produce soft-minded men purchases its own spiritual death on the installment plan.”

The memorial will be dedicated on August 28 by President Barack Obama, a man who was elected more for the color of his skin, than the content of his character. The date marks the 48th anniversary of Dr. King’s speech, “I have a dream”, on the steps of the Lincoln Memorial.

Dr. King surely would be appalled that young blacks would be rioting in the streets of American cities, looting, attacking people, nearly a half century after the achievement of the Civil Rights and Voting Rights Acts for which he gave his life.

I think he would have been appalled by a thirty-foot-tall statue that resembles those of tyrants like Mao tse Tung, Stalin, or Saddam Hussein.

For my part, the King Memorial completely misses his message of humility combined with tenacity, of spirituality linked to non-violent struggle, of faith that great wrongs can be put right by people of faith and of courage.

Our family just spent time at the MLK Historic Site in Atlanta. One of my purchases was a poster celebrating the Martin Luther King Jr. holiday. I've always thought that he would be appalled that a holiday was given to him that would provide everyone with a three day weekend. When I saw the poster I just had to buy it. It's getting hung up at my office. "Remember, Celebrate, Act. A day ON, not a day OFF."

Little strange the "committee" picked a chinese sculpture, what could they not find an aspiring young black artist to memorizes Rev. King? I would have thought that would be an honor! I guess being PC is still the hallmark.
The blocks of rock look hideous!

The stirring ideas of yesterday are being misused all around today. But this example I can only answer with a succinct, "next time, buy American." Well, here's more, from Percy Bysshe Shelley:

I met a traveller from an antique land
Who said: "Two vast and trunkless legs of stone
Stand in the desert. Near them on the sand,
Half sunk, a shattered visage lies, whose frown
And wrinkled lip and sneer of cold command
Tell that its sculptor well those passions read
Which yet survive, stamped on these lifeless things,
The hand that mocked them and the heart that fed.
And on the pedestal these words appear:
`My name is Ozymandias, King of Kings:
Look on my works, ye mighty, and despair!'
Nothing beside remains. Round the decay
Of that colossal wreck, boundless and bare,
The lone and level sands stretch far away".

I was just horrified when I seen the "monument" of Dr. King on the news, and I said the same words you did. What a horrid and cold depiction of a gentle, and peaceful man whose only goal was to unite the masses to peace. I am still horrified and I really do not have any words to put to my lips to state anything otherwise.Being an artistic type I can tell you the Chinese sculptor who carved this statue, it truly shows the harshness of where he lives and the coldness of his heart.
I watched Dr. Kings speech in school. What an honor to meet such a figure in history.

The so-called black leadership, with people like Sharpton and J. Jackson, have pretty much claimed to follow King's precepts, while actually doing just the opposite.

One facet of which I approved greatly at the time applies to all of us. Simplified, "Stand on your own hind legs, be self-sufficient and independent and don't let others define your reality."

Seems like all we have nowadays is a bunch of race-baiters who are unconcerned with anybody's character, including their own.

I remember hearing Dr. King's 'I Have a Dream' speech. It mesmerized me. The tone, and power of his voice was electrifying, not to mention the words themselves.

The only contact I had with black people when I was young, was playing football against other teams in high school. No blacks in my school, so I had no particular opinion about them.

That made it easier to appreciate MLK's speech. I still consider it the most powerful speech ever.

I agree with you about the sculpture. The word 'dismal' comes to mind.

What a slap in the face to ALL Americans! This man changed the course of history, unfortunately, less savory characters have hi jacked this gentle giants words and more importantly, his vision. That monstrosity looks like something you would see in China, celebrating a ruthless tyrant, all I can think of when I see this thing is MLK's dream being shattered, a statue erected with slave labor in a land where freedom is non-existant!
Will we hear from the Sharptons or the Jacksons, probably not, for theirs is a belief of dependency, not independence as MLK dreamed!!!
A despicable slap in the face.

Sir: I agree with you article! The "monument" is a "monstrosity." Equally appaling is the fact that the King siblings demanded $800,000. to quote him! http://wp.me/KNGo

So sad - this is not Dr. King. Send it back to the land where it was created. Allow someone who knew him to approve a new, gentler, more powerful peaceful image.