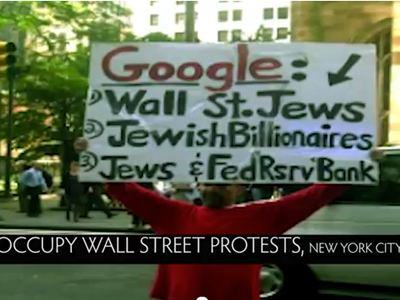 In bad times, anti-Semitism seems to crawl out of the sewers like a repugnant odor. It is not subject to a rational response. It is pure emotion and a very nasty one at that. Lately we got a whiff of it at some of the Occupy protests.

On November 3rd, the Anti-Defamation League released a nationwide study that found that “anti-Semitic attitudes have risen slightly in America, demonstrating once again that ‘anti-Semitic beliefs continue to hold a vice-grip’ on a small but not insubstantial segment of America.”

“The ADL survey found that 15 percent of Americans—nearly 35 million adults—hold deeply anti-Semitic views, an increase of 3 percent from a similar poll conducted in 2009, and matching the levels of anti-Semitic propensities recorded in the U.S. in 2005 and 2007.” Even so, what passes for anti-Semitism today is not remotely comparable to earlier, pre-World War Two generations.

One of the lesser reported aspects of the Occupy Wall Street movement has been a strong element of anti-Semitism. Little wonder that it has been endorsed by the American Nazi Party and other extreme groups, both Left and Right.

As Abraham H. Foxman, the ADL National Director, noted, “The fact that anti-Semitic attitudes have increased significantly over the past two years is troubling and raises questions about the impact of broader trends in America—financial insecurity, social uncertainty, the decline in civility and the growth of polarization—on attitudes toward Jews.”

For example, 19 percent of those polled answered “probably true” to the statement that “Jews have too much control/influence on Wall Street”, an increase from 14 percent in 2009. This indicates that Jewish stereotypes remain strong; particularly claims that Jews control Wall Street and the media.

This reflects events and attitudes in Europe as well. In an article published in the UK newspaper, The Guardian, on November 6, Emine Bozkurt, a Dutch MEP who heads the anti-racism lobby at the European Parliament, was quoted saying that “We are at a crossroads in European history. In five year’s time we will either see an increase in the forces of hatred and division in society, including ultra-nationalism, xenophobia, Islamaphobia and anti-Semitism, or we will be able to fight this horrific tendency.”

Thomas Klau of the European Council on Foreign Relations, referring to the study, said, “As anti-Semitism was a unifying factor for far-right parties in the 1910s, 20s and 30s, Islamaphobia has become the unifying factor in the early decades of the 21st century.”

The difference worth noting is that the Jews of Europe never had any intention of taking over those nations while Muslims have made it clear they want to impose Sharia law.

November 9-10 is the anniversary of Kristallnach in 1938 (the Night of Broken Glass) in which Jews and their synagogues suffered violent attacks throughout Germany, the recently annexed Sudetanland, in Hanover, and the free city of Danzig. It was the beginning of what would evolve into the Holocaust, the deliberate extermination of Europe’s Jews.

Some Jews, in response to Europe’s entrenched anti-Semitism, joined the Zionist movement, beginning in the 1890s to create a Jewish homeland in Israel, moving there before the cataclysm of the Holocaust. At the time it was a protectorate of the British. Post-World War Two Holocaust survivors moved there and, in 1948 Israel declared its sovereignty. Thereafter, many Jews fled Middle Eastern nations for the sanctuary Israel provided and were later joined by Russian Jews fleeing the Soviet Union.

These days, the Holocaust-deniers in Iran openly boast of their intent to destroy Israel (and America) with the nuclear weapons they are developing.

The ADL report’s findings are unpleasant, but hardly surprising. Anti-Semitism in America is a phenomenon of the fringes of political movements of the Far Right (neo-Nazis) and Far Left (Communists).

In these times, however, Israel has no greater support than among American conservatives and evangelicals; Jews have no better friends.

The American historian and scholar, Thomas Cahill, said, "The Jew gave us the Outside and the Inside—our outlook and our inner life. We can hardly get up in the morning or cross the street without being Jewish. We dream Jewish dreams and hope Jewish hopes. Most of our best words, in fact—new, adventure, surprise, unique, individual, person, vocation, time, history, future, freedom, progress, spirit, faith, hope, justice—are the gifts of the Jews.”

Anti-Semitism and Racism comes from the LEFT side of the political spectrum PERIOD!

The RIGHT political parties in the United States, the Republican Party, which consists of the Country Club RINO moderates like John McCain, Tea Party Movement (also called the TPM), Right Wing Libertarians and Patriots supports the Jews and detests Racism in all forms.