Time to Rid the Streets of the "Occupy" Movement 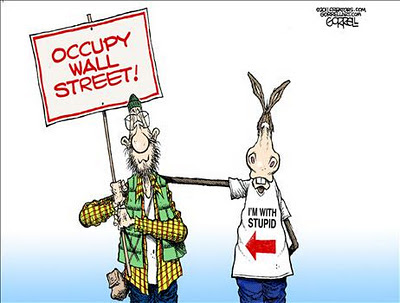 Is there any doubt left in the minds of observers of the Occupy Wall Street movement tends toward violence and is in need of control? The mayors of the cities—some seventy at last count—that are being occupied need to crack down on it.

Not all agree, of course. Among the list of the Occupy movement are the following organizations and individuals that have expressed support or sympathy:

There are others but they all have commonalities, not the least of which is a belief in Communism, they are representative of the American Far Left, and have an affinity for class and racial warfare.

There is nothing to recommend its supporters and considerable reason to take action against the movement that claims to be leaderless, but which has already been granted a tax-exempt status as it continues to collect a large bankroll.

As Lincoln pointed out, ‘The Constitution is not a suicide pact” and this nation fought a Civil War to ensure that the Union would remain intact. Thus, appeals to freedom of speech have their limits when it comes to efforts to undermine and destroy the nation. The free speech argument has been the initial fall-back position of some mayors, but it is rapidly wearing thin.

No doubt, Mayor Bloomberg of New York has been hoping that the dropping temperature as we advance toward winter will have the salutary affect of causing the occupiers of Zuccotti Park to leave. In a cash-strapped city, the millions in overtime and other costs do not justify his forbearance, but the Mayor is a liberal so his inaction is understandable. Mayors of other cities under siege have responded timidly for the most part.

As a student of history, I recall the hippie movement of the 1960s, the famed Haight-Ashbury refuge in San Francisco, and other places where a disaffected and unhappy youth gathered to “tune out” and listen to speeches about the Vietnam War and other grievances. In general, they did not engage in violence because their focus was on drugs and “free love.” 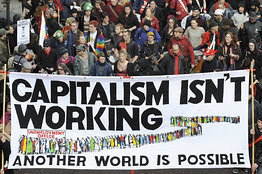 The Occupy movement is a different animal. The object of its anger is Wall Street, banks, capitalism, and the current  economic distress. One group, OurTime.org, “a non-profit organization standing up for Americans under 30”, noted that the October jobs report “reveals that young Americans hold a 15.4% unemployment rate, which marks the eighth straight month that the 18-24 demographic…”

Their anger would be better directed against a federal government that is responsible for the 2008 collapse of the housing market and major banking, investment and insurance companies, many of which were bailed out by Congress using the funds of taxpayers, the real 99%.

The youth have cause to be unhappy, but they would be better informed if they understood how poorly they have been served by a debased national educational system and indebtedness brought about by universities that thrive off the student-loan system underwritten by the federal government. Their ignorance of this and so much more is both understandable and deplorable.

Further back in history, one recalls the mobs that brought down the Weimar Republic in Germany and opened the doors to the Nazi movement. Earlier, mobs led by Bolsheviks deposed the Russian czar and imposed some seventy years of Communist control there. It is not surprising, therefore, that so many communist organizations and nations support the Occupy movement or that Wall Street is its target.

In time we shall learn who the organizers of this “spontaneous” movement truly have been, but for now public safety must be asserted to rid Zuccotti Park of this gang of “useful idiots” and wherever else they show up.

There no longer is any excuse to tolerate them and plenty of communist groups who will welcome them or, if the message of “change” put forth by Barack Obama is more closely examined, they can join the Democratic Party and continue its long history of destroying the nation’s economy.

Unfortunately Alan, these OWS folks don't want jobs they want an end to their discomfort, real or perceived, self-administered or circumstantial, through government entitlements paid for by, guess who, those of us who work. Years of our government building an entitlement consensus in this country have brought this about and the Obama Administration has brought it all to a head. Their ignorance is only eclipsed by their generosity with other people's money.

You got that right Scott ...

OWS is a product of American apathy, America has turned into a *welfare* nation, and the political correctness that gave birth to the *free cheese* mentality is the major culprit.

Spot on, Alan. I'm a college student, and these maniacs do NOT speak for me or for the vast majority of collegians. I must sadly predict that they will keep going until they provoke a Kent State reprise and use that as a pretext to spark vicious riots across the country. The violence in Tottenham would pale in comparison. The NYPD, et al, should then show no mercy in putting down these fools.
However, I think we should take it one step further. After the riots are suppressed, let's send the survivors to one of the Communist "paradises" and see how long they last. I should imagine that Occupy Pyongyang, Tehran, Havana and Beijing will be met with the violence we've come to expect from the far Left. It would be sweet justice to see them struck down by their own heroes.

Here in Melbourne, Australia, a few weeks back, some of the geniuses tried to start the movement here. Lasted a week before the Mayor ordered the police to use force to remove them from our city square. They have since regrouped and started protesting on another piece of common land - far from the CBD. No one hears about them anymore. They had their 15 minutes of fame and people are over them. What have they got to complain about when our unemployment is 5% and we have to keep bringing skilled foreigners in to work? Idiots the lot of them.