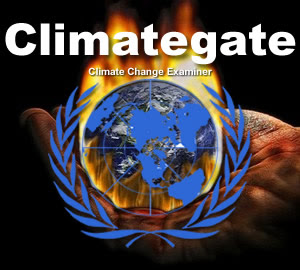 At what point will it finally occur to the pea-brained legion of journalists, academics, alleged scientists, United Nations propagandists, and others still blathering about “global warming” and “climate change” that there is no global warming and that the climate has been changing for the past 4.5 billion years on planet Earth?

It would appear that no amount of the evidence of fraud is sufficient to convince them they have either participated or been taken in by the greatest hoax of the modern era.

Perhaps, though, the latest release of thousands of emails between the UN Intergovernmental Panel on Climate Change perpetrators may push them toward a rational conclusion and release the rest of humanity from the penalties and costs imposed by the global warming hoax.

It’s not that the IPCC is not relentless in this ugly business. A report released on November 18 by these reprehensible liars predicted “more extreme weather events.”

Well, duh! There isn’t a day that goes by without an extreme weather event occurring somewhere on the Earth. One might consider the weather at the northern and southern poles extreme. Or the heat of the Earth’s deserts? Then throw in the usual blizzards, floods, and droughts—and you have a non-stop variety of “extreme weather events” to which to point.

To put it another way, the whole hoax was working just fine until the Earth began to cool around 1998. So naturally the IPCC had to (1) change the terminology from global warming to climate change, (2) deny that its “scientists” were lying, and (3) continue the pathetic prediction scheme by pointing to “weather events.”

As reported in The Wall Street Journal, “The scientific link between climate change and extreme weather, however, isn’t uniformly clear, according to the report by the Intergovernmental Panel on Climate Change, established in 1988 to assist policy makers with climate change.”

That’s right, this whole farce has been going on since 1988. At what point will the “enablers” of global warming accept defeat? Not soon if one considers that the IPCC is laying on another climate conference to be held in Durban, South Africa from November 28 to December 9. It will be the 17th opportunity for these deceivers to gather to wine and dine while taxpayers from the many nations they represent pick up the tab.

What emissions? Carbon dioxide? A trace gas in the atmosphere (0.038%) that has no effect whatever on climate or weather?

Does anyone grasp how costly all the lies about “emissions” have been and continue to be? The Christmas tree to be erected at the Capitol in Washington, D.C. comes complete with the purchase of so-called “carbon offsets” to pay for its transport 4,200 miles across the country from California. Eighty million tons of “carbon credits” were purchased.

Bear in mind, that tree and all others depend on carbon dioxide in the same way humans and other creatures depend on oxygen! CO2 is vital to the growth of all vegetation on Earth. Without it, we all die.

But what is one Christmas tree compared to an entire nation, Australia, whose government just imposed a carbon-emissions tax on everything? The tax will drive existing heavy industry and other generators of CO2 from the nation that can afford to leave and make those who cannot less competitive with global manufacturers and other businesses. Some business will just shut their doors.

This kind of deception is global. The International Energy Agency announced in early November that “dangerous climate change will be essentially irreversible within little over five years.” The news report concluded saying “The IEA uses conclusions from research collated by the United Nations. Most climate scientists agree with the U.N. conclusions, although recent polls show a growing proportion of the public in many countries is skeptical of climate change.”

No, most climate scientists do not agree with the U.N. data because they know how flawed and frequently fraudulent it is. This kind of casual journalistic reference is a lie, along with all the rest of the global warming and/or climate change data from “official” sources like the IPCC and IEA, et al.

In early November the U.S. Department of Energy published “estimates” of global carbon dioxide emissions for the year 2010. Writing in Forbes, James Taylor of The Heartland Institute, took note that the Department concluded that “emissions rose by 6% from 2009 to 2010. This constitutes the largest rise yet recorded.” And then he added that “global temperatures have not risen during the past decade.”

There is no correlation. Never was.

Whether it is the United Nations Intergovernmental Panel on Climate Change, the International Energy Agency, the U.S. Departments of Energy, Interior, and the Environmental Protection Agency, all depend on people being too ignorant or indifferent to grasp the truth that everything done in the name of global warming, climate change, or carbon dioxide emissions is a costly, evil deception.

Alan,
thanks for pointing out that Australia has just passed into Legislation a price on Carbon Dioxide (CO2) Emissions. The Government here has costed that CO2 at $23 per ton, and that's a firm price, not linked to other prices outside of Australia, where, in some places it is trading at barely $4 per ton.

The Government artfully called the package of Legislation, 18 Bills in all, 'The Clean Energy Future'.

Australians all are roundly opposed to the legislation, and the Labor Government (similar to your Democratic Party) is at its lowest popularity in history because of that, and the Conservatives have vowed to repeal all the Legislation when they get back in, after the next election, now almost a certainty.

Not only is the Australian government content to bankrupt us into 'cooling' the earth, now the Labor government is actually threatening to fine businesses that blame the carbon tax for excessive post-tax price rises of up to $1.1million. Instead, they suggest businesses tell customers they've raised prices because “the overall cost of running the business has increased”. How's that for trying to hide from the fall-out after the Prime Minister promised no carbon tax under the government she led! I'm so sick of politicians.

Tony, as we say here, Throw the Bums Out who foisted this legislation on Aussies.

I am hopeful Americans will do he same with Obama and his fellow gangsters.

Re: pea brain journalists et al. I am sure most of the people you refer to are well aware of the facts concerning AGW. The 'green' movement has been hijacked by the left of all sizes. AGW is a political driven effort.

Evidence contrary to 'the cause' is ignored. The cause will be pushed toward fruition relentlessly. The rewards are too valuable to give up now. As more evidence of fraud is exposed, expect our wannabe future masters to double down with more alarmism, and punishing legislation.

Clearly, there is a growing GLOBAL movement to impose socialism on the entire planet.

This can only be accomplished by the ending the Industrial Revolution -- "The Global Warming" Big Lie was one important way to accomplish this mission.

Therefore, it is important for we of the world opposition to remember that after we put our own countries in order, we end the United Nations and aid in the destruction of all socialist parties, anywhere in the world.

What "Climategate" scandal? If you read the news about more emails being released, the MSM is reporting, again, that these scientists did nothing wrong.


The lame steam media continues to report that " independent review panel’s report on the Climategate e-mails said the panel’s report “largely vindicated” the scientists involved: They acted honestly and their research was reliable."

Agree with comments made by TonyfromOZ. It is so absurd to have passed a tax on the air that we breathe.

However, it goes beyond absurd when Greg Combet is heading to Durban with the intention of bringing up this subject with his counterparts in other countries.

These people are delusional if they think that those other countries are going to follow Australia's lead. They are probably already laughing at us for being so dumb as to pass this ridiculous legislation.