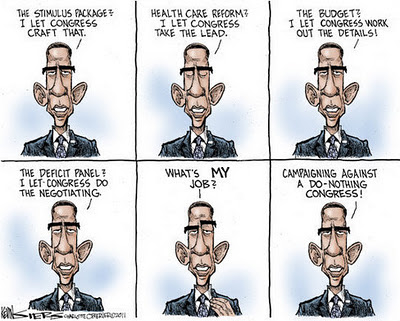 I actually pity the Democratic Party these days even though I think it has brought the nation to ruin because, as Joseph Curl recently noted in a Washington Times commentary, “Democrats must spend, spend, spend, and spend. It’s in their DNA.”

It got blown away in 1994 after forty years of control of the U.S. Congress when Newt Gingrich saved the nation from forty more. At the very least then-President Clinton had the political savvy to move to the center, earning a second term for himself.

This is not the case with President Obama who is running against a “do nothing” Congress to which he outsourced the writing of Obamacare, the stimulus programs, the budget, and, the most recent failure, the Super Committee which had been preceded by a blue ribbon commission whose recommendations he ignored.

Curl, like others, has come to the conclusion that Obama does not want to be reelected noting that this is the first President in the history of the nation to blame its present problems on Americans! While he campaigns furiously around the nation, he keeps telling voters that they are “lazy”, “a bit soft”, and have lost their “ambition and imagination.”

No, Americans are imagining what another four years of Obama would do to the nation and they don’t like what they see.

Meanwhile, the Democratic Party is stuck with their “messiah” and having some very serious second thoughts about him. When two top Democratic pollsters and strategists, Patrick H. Caddell and Douglas Schoen, go on record to urge the President to step aside and allow someone else—like Hillary Clinton—to run for the office in 2012, you know the party is in serious trouble.

The media personality, MSNBC’s Chris Matthews, gained everlasting fame when he declared early in Obama’s 2008 campaign that he felt “a tingle” go up his leg when he contemplated an Obama presidency. These days, Matthews is telling anyone who will listen that he doesn’t think either Barack or Michelle “like being in the White House.” Michelle made that clear early on, openly saying she hated it.

When the likes of Rep. Barney Frank announces he will not run for reelection, he has joined fifteen other Democrats in Congress bailing out before the 2012 national elections, knowing it will be a political bloodbath for the Party. Watch for still more to opt out as well.

The Democrats who controlled both houses of Congress when Obama took office in 2009 lost the House of Representatives in the 2010 midterm elections and saw a number of governorships go to Republicans. Unlike the Republicans who have numerous aspirants for the nomination, they have none. They are faced with spending millions to elect an unelectable President.

The chairwoman of the Democrat National Committee, Debbie Wasserman Schultz, is so astoundingly stupid that it is a reflection on the party as a whole. Despite the fact that she drives an 2010 Infiniti FX35, a Japanese luxury SUV, she declared “If it were up to the candidates for president on the Republican side, we would be driving foreign cars. They would have the auto industry in America go down the tubes.”

Meanwhile, Obama’s EPA just announced it is preempting Congress and the National Highway Traffic Safety Administration by imposing a ruling that America’s fleet of passenger cars and light trucks must meet an average of 54.5 miles per gallon by 2025, a doubling of today’s average of 27 miles per gallon. The reason? Cars and light trucks emit a “pollutant”, carbon dioxide, a gas on which all life on Earth depends in equal measure with oxygen.

The EPA rule, by the way, defies the laws of physics inasmuch as one can only get a finite amount of power from a gallon of gasoline. When you add ethanol to the mix, you get less mileage, all in the name of saving the planet.

The sole reason the Party will offer regarding why voters will desert Obama in November 2012 will be "racism." Debbie Blabbermouth, ignoring the fact that Obama doubled and tripled the national debt and saw unemployment increase, has said, “people don’t like to deal with it, but the fact of the matter is—the president’s problems are in large measure because of the color of his skin.”

A lot of people voted for Barack Obama because he was black (well, actually half black). Now they will vote for whoever the Republican nominee is because Obama has exacerbated all the Democrat programs that have brought the nation to ruin.

As a longtime recovering Democrat who switched to the Republican Party during Ronald Reagan’s era, I almost feel sorry for the Party, but that is but a fleeting thought when I consider that it has saddled us with Barack Obama, Barney Frank, Maxine Waters, Harry Reid, Nancy Pelosi, and the likes of former Congressman Anthony Weiner, among others (Jimmy Carter!) too numerous to name.

If I were a Cromwell style "Protector of the Republic" with s mandate to purge America of its traitors, I would first of all ban the Democrat Party as a clear and present danger to national security, arrest the party leadership and try them in federal court for treason.

When convicted (Of course I would appoint only "hanging judges") I would spare them from the hangman and send them to a worse fate: Imprisonment for life on the remote subarctic Aleutian Islands of Shemya and Attu.

Like Napoleon at St. Helena they would live the rest of their pathetic lives in isolation under the strict regime of a military governor and reflect upon their many crimes against the Republic under always grey skies, winds and blizzards.

Ronbo, tell the truth. You've been into the Elderberry wine again, right? :-)

I say let the wine flow, though I'd personally opt for a good tar and feathering before sending them to their journey north.

Ah yes, the Democratic Party. They have systematically destroyed the USA. Of course they'll blame race once again when Obama is kicked out after one term. People are getting tired of everything being blamed on racim - I'm sure if they could they'd blame 'global warming' on racism too!

Actually I'm stone cold sober and being brutally honest about the way I feel concerning the "Party of Slavery, Socialism, Segregation, Treason and Corruption" with a historically proven record of infamy going back to its creation by Andrew Jackson in the 1830s.

I know what I said will never happen - but I can dream the dream of SIC SEMPER TYRANNIS, can't I?

Matthews' leg tingle has turned out to be gangrene, looks like.

Once I learned who Obama's mentors were, I knew all I needed to know about the strange creature. His tenure has held no surprises for me; he'd already provided more than enough information as to his policies and decisions.

I don't waste psychic energy on that cretin. I do what I can to persuade the slow learners that they cannot afford four more years of idiocy.