The News from Iraq (as Usual) is Bad 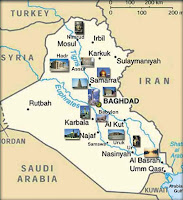 In the 1960s and throughout the 1970s it seemed that all I read or heard every day was about Vietnam. It dominated the news as its forces took on the colonial French in an effort to liberate the nation. The effort was led by Ho Chi Minh, a man who would have been regarded as a patriot had he not been a communist.

Ho was determined to unite both northern and southern Vietnam and, if he had to fight the French and take on the United States, so be it. You could have asked just about every general in the Pentagon if getting involved in a war there was a good idea and the only one who would have thought so would have been Gen. William Westmoreland who was willing to fight until the last dead American. Going to war in Asia is always a bad idea.

The problem at the time was the “domino theory” that said that a loss of any nation in Southeast Asia meant all the others would go communist as well. The result was that the U.S. lost the war and it would be a long time before it regained its fighting spirit. By then, the Draft was history and we had an all-volunteer military.

Vietnam slipped from the news pages and we began to read a lot about Iran after our diplomats were taken hostage in 1979 during the course of what would be called the Islamic revolution there. Bordering Iran is Iraq and it was the satrapy of Saddam Hussein, the local dictator. Iraq sat atop a lot of oil that generated a lot of money, but Saddam wanted more. He invaded Iran to grab off some oil fields. At the time, the U.S. was his ally. The war became an eight-year stalemate.

We stopped being his ally when he invaded Kuwait in 1990. President George H.W. Bush put together a coalition that drove him out in 1991.Then came September 11, 2001 and this time it was George W. Bush in office. After driving the Taliban and al Qaeda out of Afghanistan, Bush43 and his neocons turned their attention to Saddam Hussein. Largely unmentioned in the war that followed was the very long border Iraq shares with the oil fields of Saudi Arabia, a presumptive ally. The rest, as they say, is history.

The invasion of Iraq in 2003 was a great success militarily, but a total disaster from the point of view of having no plans and not enough troops to deal with the chaos that almost immediately followed. Typical of the Middle East, everything is about one’s tribal and/or religious affiliation. When you add in the vast oil revenues at stake, the Shiites were soon fighting the Sunnis and the Kurds were fighting anyone trying to take over their province. It was a classic SNAFU, everything was FUBAR.

Bush43 finally put enough troops into Iraq to assert control, but the politics of the place is like herding cats or sticking your hand into a basket of snakes. That’s why headlines such as the one in Monday’s Wall Street Journal, “Iraq Factions Spar Over Security Force” are, no pun intended, the writing on the wall.

I can’t think of many Americans who want to stay in Iraq as a military occupying force and you can include me. President Barack Hussein Obama made getting out of Iraq a 2008 campaign theme and we are, in 2011, getting out.

﻿
﻿ And that’s the problem. Without the U.S. as a stabilizing, balancing force, Iraq is just going to go to hell. Yes, they have had elections there and a parliament, but Prime Minister Nouri al-Maliki is also running the ministries of defense, interior, and national security. Somewhere in Hell, Saddam Hussein is laughing…a lot.

For those who have not been paying attention, there is NO democracy in the Middle East; at least not the kind that doesn’t need an army and police to make sure the people don’t get restive.

When they do, as in the case of Egypt, the current dictator is deposed or in Libya he is chased, found, and then shot in the head. In Tunisia the dictator was forced to flee, while in places like the Sudan and Yemen, chaos reigns. In Syria, the dictator is busy killing protesters in the streets.

The odds that Iraq will devolve either into a dictatorship or break apart in some fashion or be run as a puppet state of Iran are very good.

The odds that we and/or the Israelis are going to turn parts of Iran into giant craters are also very good.

Sometimes you fight a war and discover the effort was a huge waste of money, men, and time. Curiously, they always seem to be a good idea at the time.

Let me make a clarification to your remark that 'The result was that the U.S. lost the war'. As opposed to 'winning' the war it would be correct to say we 'lost' the war in Vietnam. But in reality we lost the war in the USA. It was a war to retain the resolve of the American people to halt communist aggression. That war we lost because the media, even then a liberal establishment, daily bombarded Americans with anti-war sentiments, erroneous, overblown reports of our soldiers savagery towards our enemy and the civilians of South Vietnam. People ate dinner and watched while we fought. The American public was so embittered against the war that, you are right, we lost our fighting spirit. The worst outcome of that is that today, we fight 'limited wars' always regarding the 'rules of engagement' to minimize collateral damage. You cannot win a war that way, PERIOD.
As a result, we now have to develop our 'exit strategy' before we engage any enemy anywhere in the world. If you plan your exit before you make your entrance, you are planning for defeat.
Modern warfare has no satisfactory resolution, no winners, no losers, just chaos, human attrition, horrendous expense and a return to status quo when the warring factions throw in the proverbial towel.
It will be just a matter of minutes after we pull out of Iraq before that result will be clearly seen.