The Greens Think You're Stupid 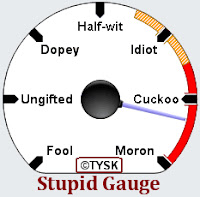 Every day EcoWatch.org sends me an email that features links to several articles on issues they regard as urgent and important. If I had no knowledge of science or much else, I would be spending my days in a state of panic and that would be just fine with the EcoWatch folks.

In late February, one of the articles to which one could link was “Top Earth Scientists Warn of Global Ecological Emergency” that was the epitome of everything that is wrong with the environmental movement in general and the machinery of the United Nations whose goal is to be the single global government with which to rule the Earth. Towards this end, the UN has an Environmental Program whose most recent gift to humanity has been three decades of lies about “global warming.”

Now the UN has its eyes set on “transforming” the world’s economic system in general and the destruction of capitalism in particular. That is what the upcoming Rio+2- Earth Summit in June is all about. Why anyone would believe anything these people have to say defies explanation.

“Ecological Internet (EI) reiterates is declaration of a planetary ecological emergency, first issued two years ago. Since then abrupt climate change has revealed itself in all its fury. Habitat loss and extinction have intensified, food and water have become increasingly scarce, and human inequity and injustice have grown.”

This kind of Chicken Little blather is the very lifeblood of environmentalism.

If individuals and nations cannot be driven to pay dearly for “carbon credits” in order to emit carbon dioxide, than some new scheme must be devised and driven by the same scare tactics and campaigns that worked for global warming until it became apparent that it was a complete fraud and those who advanced it little more than criminals with PhDs.

Parenthetically, it is precisely the Big Lie of carbon dioxide as a “pollutant” that is at the heart of the Environmental Protection Agency’s rule-making that would destroy the nation’s manufacturing and energy production sectors.

Americans and others around the world are largely unaware of the massive propaganda machine, aided and abetted by the news media and even Hollywood, that works relentlessly to shape public perceptions and opinion.

In just four day’s time, EcoWatch emails provided twenty-four links to stories, some of which had the following headlines:

There are common environmentalist themes in just these few examples. All corporations are evil, but those seeking to provide sources of energy are more evil than, say, those providing farmers the means to grow more crops to feed more people. Anything that might improve the economy or enhance the lives of Americans is vigorously opposed.

The use of deliberate deception is a constant factor in environmental claims.

The assault on America’s children continues unabated, especially in their classrooms where they are routinely taught that humans are to blame for destroying entire eco-systems, the climate, and everything else.

The latest abuse of young minds is “The Lorax”, an animated film that one critic said “all but shouts its disdain for capitalism” as the Lorax proclaims “I speak for the trees.” Another critique concluded that the film “is relentless in propagandizing how the use of natural resources to create consumer products is inevitably catastrophic.”

In sum, environmentalists, the vast matrix of eco-organizations, and the United Nations, all think you’re stupid. They are counting on it, but they are taking no chances as they overwhelm the news media, motion pictures, the Internet, and every other form of communication with their message that we must abandon common sense for their brand of Green slavery.

"I speak for the trees"

Trees must have CO2 for their growth. More CO2 would be better for all green plants. Save a tree by starving said tree. Balderdash!

A few years ago, Mr. Caruba, the EPA and the Obama czars, worked to place "fart" taxes on our farms and ranches here for livestock emissions, and then go after the dust that farmers stir up when plowing up fields for spring or fall planting. Our state government told them to "take" a hike. I am waiting for the next shoe to fall with what they will come up with for CO2 and other natural things that go on in nature. It amazes me how this government and UN think that we are such morons, and retards, that we cannot even function without their powdering and diapering our behinds to make sure we are properly care for...I wonder how they think that we here in my state are supposed to feed all of these people in the world when we do not have CO2 for plant life?

From what I have read on other blogs,
it seems like the next big scare tactic is water scarcity.

Considering the planet is more than 66%, it will be another stupid quest to rule the world.

I am looking forward to the time in the very distant future when people will be able to decide what planet they want to live on.

I say leave all the doomslayers together and let them run their little small minded meglamaniacal world. They will then have noone to distress except themselves! :-)