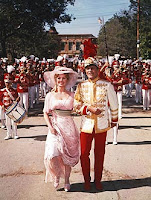 As The Music Man’s Professor Harold Hill will tell you, pool is a game that will “Help you cultivate horse sense, a cool head, and a keen eye”, particularly if you want to run the table—to shoot all the numbered balls into the pockets. As someone who once owned his own pool table, I have to agree with Prof. Hill.

I am not a political pundit and, indeed, I write about politics with a general sense of reluctance. That’s hard to avoid in the year of a general election and, currently, the madness generated by multiple primaries and caucuses.

That said, I think Mitt Romney is going to “run the table” on March 6th, known as Super Tuesday, for its many primaries, because he ran the table last week in Michigan and Arizona. He came out on top in the Wyoming caucuses as well.

While I watch the polls like others, my seat-of-the-pants judgment is that a majority of Republican voters are slowly, but surely concluding that Mitt Romney can and will defeat Barack Obama while his opponents cannot.

Much has been made of Romney’s personal wealth—some might call it success—but Americans have never been reluctant to elect men of considerable wealth to the presidency. Franklin Delano Roosevelt comes to mind. His was inherited because, Lord knows, he would have starved as a lawyer. His uncle, Teddy, was wealthy by the standards of his day.

Let’s not forget John F. Kennedy whose daddy made a small fortune as a bootlegger and later in Hollywood. Lyndon Johnson rose from modest means to acquire wealth during his years in the Senate. And, yes, the Bush family had wealth too. Bush41 made his in a classic American fashion, oil!

The argument going on in the Republican ranks has been about electing a genuine conservative. People tend to forget that during his political career even Ronald Reagan raised taxes when necessary and took stands that were surely not conservative by a purist’s standard. Bush43 foisted “No Child Left Behind” on us; one of the worst pieces of liberal legislation in modern times.

So, no, there is no perfect conservative candidate in realistic, political terms. There are men, however, who got elected as conservatives and did some good conservative things in office.

As the contrast between Rick Santorum and Romney became clear, people are being asked to make a choice between Santorum’s shoot-from-the-hip, holier than thou style and the Romney model that demonstrated a Republican could be elected in a Democrat State. Even I have criticized Romney for being a bit “robotic”, but he did was what any good politician would do; he stayed on message.

President Obama does not want to run against Mitt Romney because it will be next to impossible to smear him in the same fashion he could with Gingrich or Santorum. Ron Paul is not a serious candidate except for his mission to acquire enough delegates to force the convention platform to include his favorite cause, eliminating the Federal Reserve.

Tuesday will be full of the usual drama associated with politics, but I believe that Republican voters have turned a corner as regards Mitt Romney.

As one Wall Street Journal pundit pointed out recently, President Obama lives in “a mythical America”, one where it’s smart to spend $8.2 billion on “clean energy” companies while decrying the tax incentives to oil companies that represent half the money wasted on producers of biofuels, solar panels and wind turbines. And let’s not forget Obama’s new favorite source of energy, algae, otherwise known as pond scum.

If I am wrong, so be it, but I think Super Tuesday is going to demonstrate that Republicans are determined to avoid four more years of Obama. I even suspect that a surprising number of Democrats feel that way as well.

We'll see soon whether or not Republican Ruling Class Progressive Romney wins the GOP nomination - he is way ahead in delegates so far due to money and organization - but if he wins the presidency in November expect only socialism light.

What this country needs in office starting in 2013 is a latter day attack dog Oliver Cromwell type to use a meat ax against American socialism...

Sadly what we'll get at best is a weak little poodle named RINO Romney who lacks the courage to call Obama a Communist traitor and dictator.

@Ronbo: I diagree. I think Romney, with a GOP Congress, would set about imposing fiscal sanity and, as he says, repealing Obamacare. I don't want a divisive president. I want one who will provide real leadership.

It is the height of hypocrisy for the Obama administration to attack Romney for his personal wealth when the Obamas themselves are multi-multi-millionaires. At least Romney earned his wealth...