Violent Death in America is an Equal Opportunity Crime 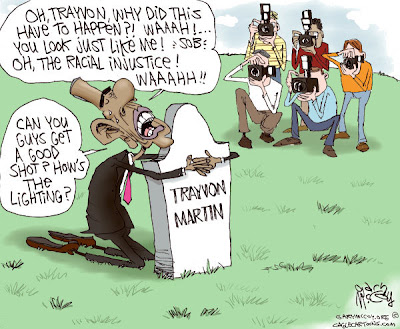 I have had an interest in demography, the study of populations and trends within populations, for a long time. Racial animosities in America have been a factor from the moment white colonists stepped off the boat and were greeted by Native Americans and, not that long after, when the first blacks arrived from Africa where slavery had flourished for centuries.

I lived in the South when Jim Crow laws were on the books and public facilities were segregated. I was a young reporter during the Civil Rights era of the 1960s and even met Dr. Martin Luther King, Jr. on one occasion. I have seen the best and worst of what race represents in America.

I would count the initial reporting on the killing of Trayvon Martin in Sanford, Florida, as among the worst media coverage in a while because, as the facts begin to emerge after a month, it turns out that there was an eye witness to the incident in which George Zimmerman, a neighborhood watch volunteer, suffered a broken nose and injuries to the back of his head consistent with an attack.

The Black Panther Party issued a reward for Zimmerman’s “capture.” In the meantime, Rev. Al Sharpton and Rev. Jesse Jackson, have been out doing what they always do, stirring up black anger and blaming all whites for what occurred.

Let’s look at the demographic facts. In 2007 the Associated Press reported that “Nearly half of the nation’s murder victims were black and the number of black men who were slain is on the rise.” The other half were murdered white victims.

Murder in America is an equal opportunity crime.

The article went on to note that black people represented an estimated 13 percent of the U.S. population in 2005, the latest data then available, but were the victims of 49 percent of all murders and 15 percent of rapes, assaults and other nonfatal violent crimes nationwide.”

The U.S. Justice Department study found that “Most of the black murder victims—93 percent—were killed by other black people.”

The study also found that 85 percent of white victims were slain by other white people. Of the black victims, 51 percent were in their late teens and twenties.

More recent statistics from 2009, posted on the website of the U.S. Department of Justice show pretty much the same trend. That year, 2,604 blacks were killed by blacks, along with 454 whites, but whites managed to kill each other to the tune of 2,963 victims, while killing 209 black victims.

Overall, between 1974 and 2004, 52 percent of murderers were black, 48 percent were white, while 51 percent of the victims were white and 47 percent were black. If one can spin these statistics to suggest that the killing of Trayvon Martin was racial, be my guest.

Appearing on the Sean Hannity program Monday evening, Zimmerman’s friend, Joe Oliver, calmly defended him saying “he is not a racist.” Oliver is black.

Why Barack Obama felt it necessary to insert himself into the situation before the facts are established was a reminder of an earlier situation in 2009 when he took issue with an incident between Cambridge, Massachusetts police and a black professor who was hauled off to jail for failing to cooperate with them. Always assuming the police are to blame or inferring that Trayvon Martin was killed because he could have looked like Obama’s son, if he had one, is a serious breach of judgment. To say it out loud is even worse.

Finally, lost in all the hasty assumptions and accusations is the fact that Zimmerman was, as previously noted, a neighborhood watch volunteer and this suggests the Sanford, Florida neighborhood had crime problems. Trayvon, we’re learning, had some earlier experiences with the local police, so he was on that evening a subject of concern to Zimmerman who reported his presence to the police and was returning to his car when the shooting occurred.

No one takes any pleasure in the death of Trayvon Martin or any other young black man. It is a tragedy, but it is also one that is repeated far too many times in too many American cities for reasons that cannot be passed off as racism. His death reflects the pathologies that plague too many of America’s black population.

We should be celebrating the black men and women that escape their cultural bondage, embrace middle class values, and ennoble their lives through their personal achievements.

Exploiting his death is a disservice to both America’s black and white population.

I love you like a brother, Alan, but you are a small voice of reason and sanity in an increasingly neo-fascist American political culture that seeks to raise blacks to the new "Master Race."

This will continue until We The People rise in righteous anger and crush the American Left with our terrible swift sword of justice, as did our ancestors in 1861 to 1865, and build a Free Republic on the ruins of the old where racism was king.

The only time Sharpton and Jackson make real money is when they can incite racial hatred. It makes them relevant and keeps their careers going. And it seems Obama is no different. Mr Zimmerman, from all accounts, is Hispanic and identifies as such, yet the media are going to great lengths to paint him as a white Hispanic, though I don't see them making the same point about Obama and calling him a white black. We know how this plays out - it's been played for so many years and this sad song always ends the same way. All it does is make people see the truth and see how biased the media - and now Obama - is.

Once again, the President along with all the 'lame-stream' media as Limbaugh calls them, have egg on their collective faces from going off half-cocked. I for one have gotten sick to my stomach of listening to the talking heads on the news talk shows slicing and dicing and swaying public opinion on high profile cases by presenting half truths and inuendo and passing it off as professional journalism.

Since when is it the job of the media to act as prosecutor, judge, jury, and executioner? People used to be presumed innocent in this country until prounounced guilty by a jury of peers in a court of law. Today with the media on the march to immediately choose sides in their biased reporting, 'innocent until proven guilty' has become nothing more than a cute catch phrase. And race apparently is always the Ace of Trump when played regardless of any facts or circumstances.

Jackson and Sharpton are pathetic. They profit from keeping racism alive and well. They ought to find some real work somewhere.