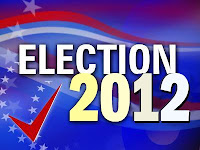 I have a suspicion that most people have lost interest in the Republican primaries beyond getting a quick update of who won, who came in second, third, and the usual question of why Ron Paul is running at all.

The primaries are a marathon that requires the men who want to be president to endure physical and emotional challenges that would likely kill anyone who lacked the will power and stamina to travel from state to state, give the essentially same speech over and over again, and be interviewed from early morning to late evening, responding to the same questions ad infinitum.

Running a primary campaign is a major business enterprise and, at this point, the only man with experience in the world of business and finance appears to be winning the delegate count needed to challenge the President.

If you’re sick of hearing about the outcome of primary elections, here’s what lies ahead:

And then! There’s the Republican National Convention August 27-30 in Tampa, Florida.

All this provides employment to everyone involved in the campaigns, everyone in the media who provides news coverage, and scores of vendors who will produce all the paraphernalia we associate with elections.

At the center of the vortex will be the candidates and surrounding them will be the endless questions of who’s ahead and who may drop out, et cetera, et cetera.

I do not know why we select our candidates in this fashion. I assume the process has evolved over the many years of the republic. No one seems to have come up with a better way of doing it, but in the end we are selecting a man to lead the nation (and the world) who will wield more power—for good or ill—than can be imagined.

It is a cliché to say that this will be the most important election of our lifetimes, but it is true.

If Barack Obama remains in office the financial destruction of the nation will be completed, the reduction of our military power will continue, the government takeover of critical elements of our economy will continue, and the America that lives in our hearts and imagination will cease to be.

There is no mystery to ending the recession we entered after the 2008 financial crisis; the longest since the Great Depression in the 1930s. Any economist will tell you how to do it. Anyone who runs a business, large or small, will tell you.

There is no mystery to reducing the flow of regulations that throttle innovation and expansion. Entire government departments and agencies need to be eliminated and Congress must be “encouraged” to stop passing massive bills it has not read! Show them the door!

There is no mystery to getting Barack Obama reelected. Republicans and independent voters just need to stay home.

The primary elections are a test of the resolve of American voters to get the real change they need and want.

It is a political IQ test.

They are the marathon we all must run if we are to reclaim and renew the America we love.

Even if Obama is defeated in November, he will remain in office until January 20th. During which time he will be able to write many executive orders.

He should have, long ago, been tried and convicted of treason.

Alan, the more I see of Obama, the more I see what he's all about. I don't think he's vastly intelligent - he's used people and people have used him to get where he is. He has a certain charisma which people seem to fall for. And he's one egotistical son of a gun. The way he prances onto stages, swaggers and then either hugs, slaps backs or sticks out his hand - all shows how he loves the attention. He's also a sore loser. He's shown his bitchy side too many times already. I'm pretty certain power has gone to his head. He went into the WH with a goal to put as many of his radical plans into action as he could and he's tasted that power and he's loving. I think he was primed to be a one-term president, but he's changed his mind. Between him and his wife they feel entitled to being there and having the country kiss their toes and do their bidding and they aren't going to give it up very easily. I also can see that the USA will be in huge trouble if he wins again.

@Lime Lite: My next commentary will assess his chances of being reelected.

@Larry: It's not just the EOs, but the pardons he will be giving out. I bet he sets a record.