Why Obama Will Lose in November 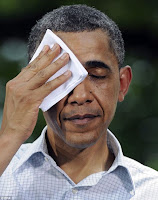 I received a campaign letter from Michelle Obama the other day. This is especially surprising because I am a registered Republican; hardly a likely prospect to contribute to her husband’s reelection efforts.

“Every day I learn about the challenges and the struggles—the doctor bills they can’t pay or the mortgage they can no longer afford,” said the text. The “fairness” theme, a socialist meme, was expressed. “American prospers when we are all in this together, when hard work pays off and responsibility is rewarded, when everyone—from Main Street to Wall Street—does their fair share and plays by the same rules.”

The fact is, however, America has not been prospering for the last four years during which Barack Obama has been President. And everyone knows it. The U.S. sovereign debt rating was downgraded for the first time while he occupied the Oval Office. Federal spending (25% of GDP) is the highest since World War Two. Federal debt (67% of GDP) is the highest since just after the end of World War Two, and the nation has experienced, not only the longest recession, but the highest unemployment since the 1930s.

In the first nineteen months of his time in office, Obama added more federal debt than was amassed by all U.S. Presidents from George Washington to Ronald Reagan.

I have two theories about the November 6 election. (1) That it will be an overwhelming defeat for Obama or (2) that it will be so close we could see a situation comparable to the Bush-Kerry election in 2004. Had Kerry won, the vice president would have been John Edwards who was carrying on an affair during that campaign and who currently faces jail for misuse of campaign funds.

Obama’s Achilles’ heel is, of course, Obamacare. As Robert Bluey of The Heritage Foundation notes, recent polls indicate that 53% of Americans favor repeal and more than half (57%) say that the Supreme Court should strike it down as unconstitutional. Fully 60% of physicians believe the law will have a negative impact on overall patient care.

The Congressional Budget Office revisited Obamacare this past week and concluded that 20 million Americans could lose their employer-sponsored health benefits and 49 million more Americans could become dependent on government-sponsored health care. Projecting through 2022, Obamacare could cost as much as $2.134 billion and the employer-mandate penalties could hit $221 billion.

There’s another reason why Michelle Obama was writing to me last week. As Karl Rove noted in a Wall Street Journal March 14 commentary, “Many of Mr. Obama’s 2008 donors are reluctant to give again” to his campaign. “As the Obama campaign itself reported, fewer than 7% of 2008 donors renewed their support in the first quarter of his re-election campaign, well below the typical renewal rate.

The Obama campaign and the Democratic National Committee are burning through current donations so fast that the White House has told this year’s congressional candidates that they will not receive any funding support for their campaigns because Obama needs all the money.

While Obama’s 2012 campaign is already showing signs of stress, other issues will impose great pressure. Unemployment affects most American families either directly or because some member of the family or a friend is unemployed. Even the unemployed vote!

The price of gasoline continues to rise and there is nothing the White House can do to reduce it. Releasing oil from the Strategic Petroleum Reserve that exists for use only in an emergency will not do it and Americans are well aware that this administration has opposed or thwarted every effort to drill for more oil on federal lands. The failures of “green energy” companies that have cost Americans billions in loan guarantees are well known. A President who hypes “algae” as an energy solution will be seen as a fool and/or a complete charlatan.

Recent polls indicate how close the 2012 election may be. Obama has lost ground among female voters. In a head-to-head match-up with Mitt Romney, women voters back Obama 49%, but that is seven points lower than 2008. A Rasmussen poll found that 59% of likely voters asked whether Obama is more liberal or more conservative than they are answered that he was more liberal. Of these likely voters, 65% who are also union members thought Obama was more liberal than themselves.

A conservative campaign message will win in 2012 and this explains why the Republican primaries are all about candidates striving to describe themselves as a “true conservative.”

Even the mainstream media show indications of less Obama support. When even The Washington Post rejects Obama’s lies about U.S. oil reserves, as it did on March 15th, it suggests there may be a growing, wider level of disenchantment with the man they embraced in 2008.

Obama will lose in November. It may be a very close election or it may be an overwhelming rejection, but the polling numbers and the state of the economy will be the deciding factors.

Memo to Michelle Obama: The “fairness” message is not working. The appalling failures—“stimulus” anyone?—of Obama’s first term will ensure that there will be no second term.

I hate to play Cassandra to your Pollyanna, Alan, but I think Obama will win another term in November, as the Left will lie, cheat, steal and even murder to keep the Regime in power.

God knows I hope you are right about Obama losing. Personally, I hope he loses in a landslide, proving that Americans reject his socialist agenda. However, if the election is close, the margin of fraud will be what keeps him there.

@Ronbo. The Dems tried that with Bush43 as well and lost. What else is new?

What republican will energize the conservative base? None of the current candidates. this assures an Uhbama victory in Nov 2012...sorry folks, that's what I see...

Without an energized conservative base in NOV2012, Uh-bama wins. And Romney isn't going to energize anyone....Sorry peoples.....

If anything will get Obama voted out of office, it will be the continuing increases of the prices of gasoline and diesel fuel.

During his campaigning for the presidency, Obama outright said: "Under under my policies, the price of fuel will skyrocket."

Of course, in any election, best save the most damaging evidence until no more than 2 weeks before the election.

Of course, by the time of election, fuel price increases will have caused so much grief to even his supporters, who knows what will happen in the meantime. Might be outright revolt before then.

All: A common theme I hear in feedback is that Obama will not give up power, declare martial law, etc. The other theme is that the GOP cannot find a candidate to energize the base.

Neither the Democrat, nor Republican Parties have anything to gain by allowing Obama to become a dictator. And everything to lose.

I am reminded of how Nixon was told at last to resign and did.

Obama will be thrown overboard by the Dems as soon as it become obvious he cannot be reelected. They will work to retain control of the Senate.

The US is not a banana republic.

@Alan - Neither was Germany in '33. One does not need to live in a banana republic to end up with a dictator.

It's a simple choice. Obama, or the GOP candidate. NO GOP candidate is anywhere near as bad for this nation as Obama, and some could be downright good.

Obama will lose, and he will lose big.

As the election draws near, he will begin to panic as his polling numbers drop. The economy, gas prices, unemployment, the stock market ... all will be going the wrong way.

And, depending on how clever the GOP campaign is, Obama's poll numbers could begin to drop precipitously, which would lead to a major mistake by Obama's efforts to compensate.

The tired old "blame game" and "lie, lie, lie" strategies of the past won't work this time ... people have wised up to this charlatan.

@Bob: We are in agreement. I think he will lose dramatically. The rejection will be historic.

Alan: I appreciate your optimism regarding no martial law declared, I still see a lot of folks out there who think Obama may or will do it. It's been 2 months since you stated you think it's not likely to happen. Do you still feel that way now? I really don't know what to think but I'm hoping he doesn't try it.

Dr. Quest, martial law is a very unlikely scenario. Then, too, there are several million armed Americans that might object.

Thank you Alan, for your reply, and your optimism.
Your logic seems very sound. Enjoy your blog very much.