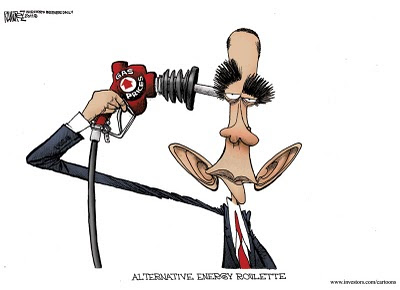 Why some people are having difficulty identifying the cause of the present high cost of gasoline at the pump as the direct result of the last three years of Barack Obama’s energy policies is one of those great mysteries.

By “energy policies” I mean his administration’s opposition to access to the billions of barrels of oil on federal lands.

I mean his Energy Secretary’s earlier opinion that high gas prices are good for the economy, abandoned as they climb to and passed $4.

I mean Obama’s lies about the recent increase in oil production when he knows it is occurring on private and state owned land, not federal land.

I mean his opposition to the Keystone XL pipeline.

I mean the waste of billions of taxpayer’s dollars on “renewable energy” firms, many of which have already failed, along with the sales of the Chevy Volt, whose production has been discontinued.

I mean two amendments to the Senate transportation bill that would have created new taxpayer-funded subsidies for natural gas vehicles, extended the production tax credit to underwrite wind energy, and revived the Treasury grant program that gives taxpayer money for the installation of solar panels and other renewable technologies.

I mean the impact his policies are having on everyone’s wallet and its drag on the economy as his policies drive up the cost of gasoline and everything dependent on transporting goods anywhere…and that is everything!

In early March, speaking in Nashua, New Hampshire, Barack Obama said, “Let’s put every single member of Congress on record. You can stand with oil companies or you can stand up for the American people.” This consummate liar is using the same pathetic message and damage done by Jimmy Carter---who got voted out of office after a single term as president.

In his 2005 book, “Why Your Gasoline Prices are High”, Seldon B. Graham, Jr, a graduate of West Point, used his fifty years of experience in the oil industry described what happened when, in 1981, Congress passed a windfall profits tax. “It was a death notice for USA oil. Many U.S. oil and gas companies went bankrupt…and those which survived were forced to go overseas to explore and drill in foreign countries.”

At the very time when the Middle East is in turmoil, the Democrats want to repeat the same blunder of 1981.

In a nation that sits atop billions of barrels of untapped oil in federal lands such as the Arctic National Wildlife Refuge, domestic oil reserves in the lower 48 states, the Gulf of Mexico, and the vast untapped reserves off the nation’s continental coasts, the Obama administration has restricted oil companies from exploring and drilling in areas where new reserves of oil and gas are known to exist, shortened lease terms, and has slowed down permit approvals.

That is the equivalent of declaring an energy war on the nation. Moreover, in a virtual secret, the Obama State Department is involved in a deal to turn over seven Alaskan islands to Russia. One of them is the size of Rhode Island and Delaware combined and who knows how much oil lies beneath them?

Oil prices are set by the market principles of supply and demand. By aggressively thwarting access to America’s abundant oil reserves, the Obama administration is deliberately keeping prices high and forcing them higher.

As Jack Gerard, the president of the American Petroleum Institute, said in a press conference on March 8, “When crude prices are high, the price at the pump is also high. With a 42-gallon barrel of crude oil topping $106, refiners pay more than $2.50 for each gallon of crude they must purchase. Add in the almost 50 cents per gallon on average in gasoline taxes and you have over $3.00 of what consumers are now paying at the pump.”

Simply by announcing his intent to open new areas for exploration and production, President Obama could signal the market and put downward pressure on today’s and tomorrow’s gasoline prices. This is exactly what happened when President Bush lifted the moratorium on the East and West Outer Continental Shelf back in July 2008. It resulted in a 12% decline in the price per barrel.

Why are we paying more? Why are U.S. dollars going to oil-producing nations that do not like America? Why are we competing for oil with China, India and other emerging economies when we have enough oil, gas, and coal to be energy independent for the next century or longer?

The reason is the policies of the present and past administrations going back to the days of Jimmy Carter in the 1970s. The answer given by the White House is greedy oil companies and Wall Street “speculators.” It is a lie.

The worst of it, as a recent Wall Street Journal article explained, “Oil can’t go much higher without derailing the economy…at some point, oil prices overwhelm everyone,” wrote Liam Denning. Keeping them artificially high can have no other purpose than to continue the destruction of the nation and the President knows it.

Big Brother's Obama's plan to crush the USA economy is right on schedule!

Sincerely, Winston Smith of the Ministry of Truth

The plain fact is, that in the lower 48 there are, in known reserves, enough crude oil, coal and natural gas, enough equivalent barrels of oil to easily meet our energy needs for at least 7 centuries, and that doesn't coult the huge amounts of oil and gas in shale oil deposits.

This nation has, at least 1.3 Trillion equivalent barrels of oil in the lower 48 states.