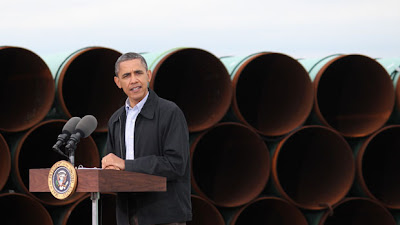 The President’s trip last week to Cushing, Oklahoma, was nothing more than the opportunity to stand in front of a stack of oil pipeline sections and lie some more about the Keystone pipeline. His contempt for the intelligences of Americans was on full display.

A pipeline section that did not require his approval or involvement was touted as “a priority.” His delay of the Keystone pipeline from Canada was passed off as based on his concern for “the health and safety of the American people.”

The safety of oil pipelines is well established. There is an extensive network; 55,000 miles of crude oil trunk lines in the U.S. and another estimated 40,000 miles of small gathering lines located mostly in Texas, Oklahoma, Louisiana, and Wyoming that gather oil from wells both online and offshore and connect to the larger trunk lines.

Obama thinks most Americans are so dumb that a photo and a short televised news report in front of pipeline sections will convince them he and his administration have been leading the effort to ensure domestic oil is available.

He is wrong. He is the stupid one.

By the end of the week, Rasmussen Reports released the results of a poll in which “Voters continue to believe the United States is not doing enough to develop its gas and oil resources, and strongly support offshore drilling. Most also still think going ahead with offshore drilling is likely to bring down the price of gasoline at the pump.” Of those polled, 62% favored offshore drilling.

The Governor of Oklahoma, Mary Fallin, when asked about Obama’s speech, said, “President Obama’s rhetoric is matched with a policy record that is aggressively anti-energy and continues to stifle economic growth in Oklahoma and throughout the nation.” Gov. Fallin said Obama should “reexamine his polices, not deliver more speeches taking credit for the accomplishments of others.”

That, however, is standard operating procedure for Obama. Either he blames anything and everything that goes wrong on someone or something else, or he takes credit where none is due. What is one to expect from a President he was given a Nobel Peace Prize within months of taking office in order to pump up a virtually invisible resume? No doubt the Nobel committee will be giving out free pizzas to all who attend future ceremonies.

In January, when Obama announced the delay of permits to the Keystone XL pipeline from Canada—a major trading partner and ally—Tom Pyle, the president of the Institute on Energy Research, called the decision “unconscionable.”

“With more than 1.7 trillion barrels of recoverable oil under our soil,” said Pyle, “we have enough oil to fuel our present needs for the next 250 years.” The addition of the Canadian oil will further ensure future energy requirements will be met.

It isn’t just the President who lies. Members of his administration do so all the time. During a White House press conference in March Interior Secretary Ken Salazar said that oil and gas production had increased on federal lands.

It has declined and increases in oil production have come primarily from privately owned land. On federally controlled lands, oil production since 2010 has dropped by eleven percent and gas by six percent. Revenue from lease sales for exploration and extraction is 250 times less than during the last year of the Bush administration.

This is an administration that re-authorized a moratorium on offshore drilling and imposed an embargo on oilshale development while at the same time wasting billions on so-called green energy “investments.” The Secretary of Energy, Steven Chu, gave himself an “A” for the job he’s done thus far even as the cost of gasoline at the pump climbs toward $4 and higher.

Secretary Chu’s own department’s Energy Information Administration recently reported that the oil industry paid some $35.7 billion in corporate income taxes in 2009, the latest year for which data are available. According to The Wall Street Journal that is about 10% of non-defense discretionary spending. “All told, the government rakes in $86 million from oil and gas every day—far more than any other business.”

Voters would, indeed, have to be as stupid as Obama thinks they are if they reelect him in November.

Why do you cite an opinion poll about the level of drilling rather than the fact that domestic drilling is at a decade-long high? Darn inconvenient facts!

@Davis: If that were true, how do you explain the high cost of a barrel of oil these days?

@ Alexander - did you not read the article? It has NOTHING to do with Obama increasing drilling - he's done as much as possible to stop drilling. It's the private sector who are doing the drilling. The Federal lands lay closed to development.

Alan - was Bush blocked from drilling Federal lands when he was POTUS? If not, then why didn't he at least start the process?

@Lime Lite: Bush, I believe, got Congress to okay offshore drilling, but nothing came of it. Obama put a moroatorium on all of it.

@Alexander, where is the data to support your assertion? I cannot find any factual evidence anywhere.

Another classic study in editorial journalism published by the Master of Nonfiction!

The upside: The productive and above average intelligence section of the I.Q. voter spectrum says loudly, "WE HEAR YOU LOUD AND CLEAR, BROTHER ALAN!"

Downside: The parasite and below average intelligence section of the peanut gallery voting bloc says in mindless unison, "SHUT UP AND SEND ME MORE OBAMA MONEY!"

Thus the November election turns on the the parasite and productive voters...

Unfortunately, Crude oil must be refined to have any effect. As of Hurricane Katrina, the oil companies said that the refineries were then operating at 95% of theoretical capacity. With shut-downs for maintenance, that would be at 100% of actual capacity.

No new refineries have been allowed to be constructed in the United States for some 40 years.