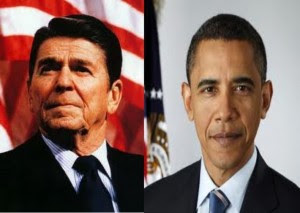 A comparison between Ronald Reagan’s and Barack Obama’s first inauguration speeches reveals the gap between their understanding of the role of government and how much America has declined from January 1981 and January 2009.

In 1981 Reagan told Americans that “These United States are confronted with an economic affliction of great proportions.  We suffer from one of the longest and one of the worst sustained inflations in our national history. It distorts our economic decisions, penalizes thrift, and crushes the struggling young and the fixed-income elderly alike. It threatens to shatter the lives of millions of our people.”

In 2009, the nation was reeling from the financial crisis brought on by two government entities, Fannie Mae and Freddie Mac, who had not merely purchased mortgages of dubious value, but had pressured banks to make such loans. It was a crisis made by the government, based on liberal programs intended to ensure that even people who could not afford a home, could have one.

In 1981, there was another burden as well. Reagan told Americans that as “great as our tax burden is, it has not kept pace with public spending. For decades, we have piled deficit upon deficit, mortgaging our future and our children’s future for the temporary convenience of the present.” He warned that “to continue this long trend is to guarantee tremendous social, cultural, political, and economic upheavals.” Those upheavals arrived in 2008, requiring the government to bail out banks and other financial institutions with billions of public funds.

In 2009, Americans could not have even imagined that the Obama administration would increase the national debt by six trillion dollars or that it would grow to $16 trillion within a scant four year’s time.

Obama told Americans that the economy “is badly weakened, a consequence of greed and irresponsibility on the part of some”, by which he meant the victims of government programs and policies—the nation’s banking system—but he also blamed “our collective failure to make hard choices and prepare the nation for a new age.” We now know that his “new age” was a shift to a socialist approach in which government would select winners and losers in the previous free market, the failure to reform “entitlement” programs going broke,  and the vast expansion of government programs that would put nearly half the population on the public dole.

Reagan had warned against this in 1981. “You and I, as individuals, can, by borrowing beyond our means, but for only a limited period of time. Why, then, should we think that collectively, as a nation, we are not bound by that same limitation?” Obama would be the first President to see the nation’s credit rating, the best in the world, reduced.

Reagan said, “We are a nation that has a government—not the other way around. And this makes us special among the nations of the Earth. Our government has no power except that granted to it by the people. It is time to check and reverse the growth of government which shows no signs of having grown beyond the consent of the governed.”

Today we have a Congress held in a historically low regard by the governed and one in gridlock due to the obstinate refusal of the Democratic Party to cooperate, to compromise, to negotiate, to address the threat of economic collapse as the result of excessive spending at the same time the President insists and gets higher and higher taxes. In 2009, Obama said, “On this day, we come to proclaim an end to the petty grievances and false promises, the recriminations and worn-out dogmas that for too long have strangled our politics.” He personifies the very thing he condemned.

How prescient Reagan was in 1981 when he said, “It is no coincidence that our present troubles parallel and are proportionate to the intervention and intrusion in our lives that result from unnecessary and excessive growth of government.”

In Obama’s first term, his signature legislation called Obamacare not only imposed many new taxes, but challenged freedom of religion as well. It effectively nationalized twenty percent of the nation’s economy. It put government in between patients and their physicians.

Obama’s first inaugural speech was sprinkled with signs of his intentions. Ignoring the fact that government does not create jobs—the private sector does that—but he promised “to create new jobs.” Despite the failure of his energy policies that saw government waste billions in loans to failed solar and other green energy companies, Obama said, “We will harness the sun and the winds and the soil to fuel our cars and run our factories.”

“The question we ask today,” said Obama, “is not whether our government is too big or too small, but whether it works…” In 2013 the government is not working. There are 26 million Americans out of work after four years in which the official unemployment rate has barely dropped below eight percent. “And those of us who manage the public’s dollars will be held to account, to spend wisely, reform bad habits, and do our business in the light of day.”

Obama was not held to account by enough Americans and has been reelected to continue policies that have not avoided the “fiscal cliff” because of his refusal to work with the Republican Party that has sent one bill after another to address our economic crisis only to see them kept from a vote in the Democrat-controlled Senate. His administration has operated without a budget for three years at this point.

In the arena of foreign affairs, in 2009 Obama said, “To the Muslim world, we seek a new way forward, based on mutual interest and mutual respect.” That policy has been a complete and utter failure.

Obama’s legacy thus far has been a polarized society based on class warfare; a society in which millions more Americans are purchasing guns in anticipation of an attack on the Second Amendment, and a government that menaces the Constitution. His second inaugural speech will be as filled with false promises and failed policies as his first.

Obama said on 25 Nov 2008 the following: "We will go through our federal budget – page by page, line by line – eliminating those programs we don’t need, and insisting that those we do operate in a sensible cost-effective way."

Still waiting for him to take responsibility. Obama is a socialist who used emotive words like 'hope' and 'fundamentally change' to hypnotize the American people into voting for him. He said all the right things, made all the right promises, and looked the part. He spoke well and people interpreted that as intelligence. And America fell for him not once, but twice, even after his first dodgy term in office. And second time round he didn't make any promises - his entire campaign focused on trashing his opponent, because he knew he couldn't stand on his pathetic record. And America, filled with low information voters, voted for him again. Those same low information voters who watch Jon Stewart and read Huffington Post and watch MSNBC for their 'news'. What a sad state of affairs this is. America has always prided herself on being real smart and innovative - the dream for the rest of the world. I'm guessing it's not the case anymore....and economic collapse is just a heart-beat away. But, don't expect the MSM to tell the American public the truth. No, rather attack the GOP as a failed party than warn people of what's coming. Got to keep Obama looking good while blaming others for his failures.

An excellent summation of the USA's problems today.

In brief, too many stupid people.