Dumber Than You Think You Are 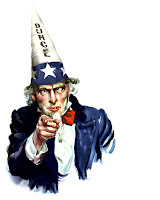 If you passed through any school system since the 1960s, you are a lot dumber than you think you are. Those of us educated in the 1940s and 50s learned the fundamentals of literacy, history, civics, mathematics, and science in ways that no system relentlessly devoted to “self-esteem” ever could.

The takeover of the educational system, traditionally the responsibility of the states and individual communities, is part of the legacy of former President Jimmy Carter who reorganized the Department of Health, Education, and Welfare, establishing a cabinet-level Education Department. He signed it into law on October 17, 1979 and it began operating on May 4, 1980.

The other factor was the rise of teacher’s union beginning in the 1960s. The unions feathered their nests, ensuring that costly retirement and healthcare benefits would burden state budgets until the present when a number of Republican governors in recent years began to reduce their power, based on spending millions to elect legislators friendly to their interests.

It is no accident that the Game Show network has a program, Are You Smarter Than a Fifth Grader?

Still another factor has been popular entertainment; in particular, television. For example, the programming of children’s shows are platforms for socialist propaganda, emphasizing the usual lies about the environment and other “progressive” agendas. As often as not, programs for an adult audience, particularly on the National Geographic channel, have engaged in the same dubious “science.”

Aside from the provision of sports and entertainment, television today is filled with programs that are designed to appeal to the lowest IQs. If you tune to the Arts and Entertainment channel (A&E) you will find yourself watching Parking Wars, Storage Wars, Duck Dynasty, and Finding Bigfoot. And why would you watch such shows?

The History Channel has little to no relationship to actual history with programs like Ancient Aliens that purport to show how visitors from other planets aided humans in long ago eras are responsible for the advances of human civilization. On TruTV you can watch Wipe Out as hapless fools try to get through a series of obstacles that knock them around or feel good about yourself with their World’s Dumbest series by watching people too stupid to take up space on planet Earth. Need cash? Watch Hard Core Pawn.

On the Life channel you can watch a show about hoarders, people so deranged they cannot throw out anything and on Biography you can watch Ghosts Caught on Tape. Cartoons directed at adults are filled with the crudest humor from South Park to American Dad and Family Guy. Watching The Real Housewives of anywhere is an assault on anyone’s intelligence as is Keeping Up with the Kardashians and any of its spin-offs.

Dance Moms and Toddlers and Tiaras are tantamount to child abuse. On TLC, there is the idiotic Here Comes Honey Boo Boo.

Meanwhile, entire generations of children can watch adults portrayed as idiots on shows such as The Office and Arrested Development, as well as popular sitcoms like Two and a Half Men.

This “entertainment” is barely offset by channels such as CSPAN or those on public television that must compete for viewers against this avalanche of moral decay. It says something about present fears and concerns when the most popular news channel, Fox News, retains some semblance of a conservative point of view though one must endure the liberal views of Juan Williams and Bob Beckel.

While the nation is roiled by talk of new gun control measures, most TV dramas feature all manner of killing with firearms to the extent that it doesn’t even register as “a problem.” Local news is almost entirely devoted to who was murdered or died in some accident that day along the weather and sports. This mayhem is so much a part of our lives that it does little more than create a generalized level of anxiety.

Various “man in the street” interviews display a frightening level of ignorance about national politics and events.

Considering that Congress is filled with the children of Baby Boomers and caucuses that include the Congressional Black caucus, the Zero Capital Gains caucus, and a caucus on the climate, among dozens of others that are often idiotic special interests, it is little wonder that this fundamental institution of our government now reflects the dictates of a Marxist President and the agendas of those seeking to strip our society of its moral values while also destroying the economy at warp speed.

You don’t have to watch these shows. You can turn off the TV and read a range of books that examine the issues of our times and of the nation’s extraordinary history. You don’t have to remain the victim of an educational system that has deliberately dumbed down Americans. You don’t have to believe the lies of Barack Obama, Harry Reid, Nancy Pelosi and their cohorts. In 2014 you can vote to put the brakes on the destruction of America.

You can't pick on Finding Bigfoot. That's 2013 science at it's best! No matter what they discover on the show the lead "researchers" say "That's got to be a 'Squash". It's just like the Global warming people. No matter the weather, hot or cold, it must be related to Climate Change!

Pitiful examples of where we are in this country.

It's true. You don't have to watch all that nonsense on television, all of which is pitched to those miss-educated over the last few decades. You don't have to restrict your information sources to only popular media. But most do.

Hey, wonder what would happen if influential advertising users objected to being associated with some of the silly narratives that seem to infect the media from time to time. With real dollars.

The 112th Congress has an average age of 62.2, which would make them mostly Baby Boomers. http://www.senate.gov/reference/resources/pdf/R41647.pdf

"If you passed through any school system since the 1960s, you are a lot dumber than you think you are."

And that's the crux of the problem. It's not that every generation from Generation X onwards is dumb, it's the fact that they think they're smart. They haven't been educated, they've been indoctrinated, and they have no idea how stupid they are.

I have to admit that after spending the day listening to bad news on talk radio, and Bret Baier I watch Duck Dynasty, an actual Christian family show. I also watch Storage Wars. I have to do something to ease my mind from seeing what is happening to our country. I am also our county Tea Party chairman and have a conservative blog. I consider those shows mind candy.

Thanks for reminding why I threw my television set away years ago!

I get my news, opinion, music and video via the Internet, where I pick and choose EXACTLY what content I will watch, listen or read.

I wonder how many people in the world do the same thing? I'd say judging by the falling rating numbers for new television programs, they are pretty much down to moron viewers.

Also, speaking of education. My core education took place in the 1950s and 1960s in West Virginia and Ohio. Even in the 1950s, the schools in W.Va. were teacher unioned and El Sucko, but in Ohio during the early and middle 1960s had no teacher unions and they were excellent!

In fact, in 1966 when I enlisted in the U.S. Army my test scores results higher than many of those with Bachelor Degrees in college, and I was eligible for OCS or Military Intelligence.

Naturally, this result encouraged the Army to post me in the Queen of the Battle - the Grand & Glorious U.S. infantry, but after infantry A.I.T. at Ft. Jackson, S.C. where I was awarded the MOS of 11 Bushbeater, I took the advice of a smart and very pretty WAC in the Brigade Personnel Office and re-uped for one more year to get into M.I.

This is indeed the situation but I don't believe that it is not the will of most people. We blame things on the media, and the media is worthless but bottom line, people chose this life. It was easier to sit the kid in front of the TV and let him watch propaganda than actually take the time to watch and interact with the kid. In that sense, day care is somewhat better--more activity, less time for propaganda. The people to blame are the apathetic persons who just did not care about what was and is happening and did not bother to get involved. Plus, at this point, a very large percentage of the population are happy with the lack of understanding. The government will fix everything, so why take time out from Facebook to study politics. This is who we are, even if it's frustrating to smaller and smaller percentage of the people.

The fact that kid are stunningly ignorant is disturbing. They are so ignorant of educational fundamentals that it is well known that community colleges are making a bundle providing preparatory courses in reading, writing and math in order for high school graduates to enter college. Why? They should have gotten all of this in public school. SAT scores are at the lowest level they have been in the last forty years.

But what is even more disturbing is how ignorant and incompetent are the teachers, and this is especially true among “unqualified minority teachers who are given a “pass” in college by affirmative action advocates and, as a result, have to cheat in order to pass their teacher certification tests”. These are people hired to teach fundamental skills when they are totally lacking in “fundamental teaching skills”. When schools are rated on how the kids do on tests “what are the teachers to do “who can barely read, write, and compute themselves”? They have been caught helping the students to cheat.

Nothing will fix this until the schools have been released from the grip of the progressive movement that has been at work since the 1890’s to take control of public education away from parents. And the teachers unions are part and parcel of this nest of vipers.

You may wish to review the article, "Unqualified Teachers Cover Up Their Incompetence By Helping Students Cheat."