Is Syria's Assad Dead or Fled? 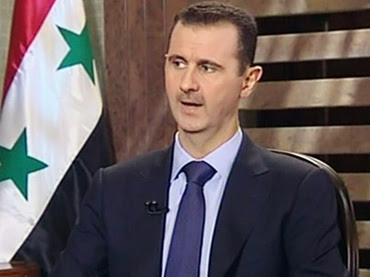 It is the nature of despots to fight to the end, though some do flee. The former dictator of Tunisia was smart enough to get out with his skin, but Libya’s Gaddafi was eventually captured and summarily executed. It took a U.S. invasion to rid Iraq of Saddam Hussein who was found hiding in a hole in the ground. The end for most despots is ugly, but they often do not have too many, if any, options.

On January 5th, Bashar al Assad, the son of Hafez al Assad, the despot who ruled Syria for twenty years, gave a speech to an audience of supporters and, having killed 60,000 Syrians at this point, sounded quite defiant. He called the civil war that has been going on for the past two years a period of “transition” which is about as daft as it gets. According to Assad, his enemies are Islamic radicals who, in turn, are Western “puppets.”

Within twenty-four hours there were unconfirmed reports on the Internet saying that he was dead or had fled Damascus. The truth about anything in the Middle East can be elusive.

The Middle East often makes for strange bedfellows. While the United Nations typically wrings its hands, there are indications that the U.S. has been covertly transferring arms to the rebels, Syrians tired of the Assad regime’s oppression and al Qaeda that wants to be in position to exercise some power after Assad is driven from office. The curious aspect of this is that the assassination of the U.S. ambassador in Libya and three others was reportedly carried out by al Qaeda. It is often hard to know who one’s allies are in the Middle East.

Assad’s major ally has been Iran, the primary sponsor of Hezbollah, a Palestinian terror group that currently controls Lebanon and never ceases to threaten Israel with destruction. Another ally has been the Russians who have cultivated relations with him because they want to retain a port in the Mediterranean for their warships. They have voiced reservations about Assad of late.

Syria’s neighbors, Turkey, Jordan, and Lebanon have provided refuge for the many Syrians who fled the war.

Israel has kept a low profile. Israel has occupied the Golan Heights since their loss by Syria in the 1967 war. Bashar’s father, Hafez, was smart enough not to engage in further wars with Israel.

Whether he is alive or dead, Bashar al Assad and his regime is finished. The biggest losers have been the Syrian people and, as an Israeli scholar, Dr. Mordechai Kedar, the director of the Center for the Study of the Middle East, has noted, “The country is in a state of clinical death resulting from systemic collapse.”

As bad as the estimated 60,000 deaths so far have been, Dr. Kedar, predicts that the death toll of members of the Alawite tribe that has run the nation will increase as Syrians take their revenge.

“Other small sects as well—the Christians and the Druze—are among the losers because the Alawite regime protected them.” Many have fled or soon will. Dr. Kedar described the Assad regime as dictatorial in style and feudal in structure. The irony of the revolution to get rid of Assad is that “freedom is not a natural thing, especially in the Middle East.” The rebels are likely to find themselves under an Islamic-religious dictatorship.
A point in case is Egypt where the citizens rose up to demand the removal of Hosni Mubarak only to find themselves dealing with Mohamed Morsi, a leader of the Muslim Brotherhood, who has already demonstrated his own despotic inclinations. Meanwhile, the Christian Copts of Egypt will have to flee for their lives and Jews as well.

The other big loser when the Assad regime falls will be Iran, says Dr. Kedar. Syria was Iran’s “Trojan horse in the Arab world” and the base for Hezbollah. “Despite its economic difficulties stemming from international sanctions, Iran has sunk an estimated twenty billion dollars in Syria during the past two years in weapons, ammunition, and payment of Syrian soldier’s salaries in an effort to keep them from deserting.” That investment will be entirely lost. The Iranian ayatollahs will likely find themselves further isolated, both within Iran, and in the region.

Moreover, says Dr. Kedar, “Other Arab peoples—of Jordan, Algeria, Morocco, Iraq—might be encouraged by the success of the Syrians, and surge into the streets to achieve their own freedom from domineering rulers.” There are current news reports of Iraqi protests.

The Israelis have built a fence along their border with Egypt, much in the same way they built one between themselves and the West Bank and Gaza in response to the Palestinian “intifadas” that killed Israelis in their homeland. They recently waged a short air war against Hamas to discourage the constant rocketing which received little coverage in the West until, of course, they took steps to defend themselves.

Not even Europe is spared by the Syrian revolt. “Even now,” says Dr. Kedar, “thousands of Syrian refugees are knocking on Europe’s doors, which are closed to them, so that they can open a new chapter in their miserable lives. In Europe, they know well that an Arab refugee will never leave and, therefore…Europe fears the flow of Arabs into its territory and is slowing down their immigration as much as possible.”

About the only thing that can be predicted with any certainty is the Middle East and the Muslim nations of northern Africa—the Maghreb--will remain in turmoil as the Islamist factions, al Qaeda and others, seek to impose their will on the various nations.

Oh Lord, not dead... There are many more Syrians left to kill..

People get so upset every time an Islamic dictator goes on a killing spree and kills thousands of his own Muslim people...

Not me, I see it as less we have to deal with at some time in the future...

Fred, prevous reports of Aasad's death proved wrong and the latest will as well. I thought the title would at least get some attention.

I find it interesting that so many Muslims insist the West is contemptible yet are constantly moving here. Unfortunately, after they move to the West they then attempt to turn the countries they moved to into the country they fled. Multiculturalism is a disaster and the socialists of Europe who have been promoting this nonsense for years are now suffering the consequences. And Sweden is now a perfect example of that fact.

Rich, I have come to view Islam as a kind of mental disease. They destroy everything they touch.

Much of the Islamic world's mentality is stuck in the Middle Age's. Progress and peace is not something these people can grasp, want, or will tolerate with this type of mentality.

What is sad and rather stupid in my opinion is how much time and money the we the Western world invests in these people, to try to grasp our worldly views of freedom, peace,and progress.

I wish someone would proove the link between undercover arms sales through our Libyan embassy and the rebels in Syria. If that and the coverup of these operations by the WH could be proved, this president's career would be over.

I agree, Bruce, but every day means the Benghazi scandal gets buried a little bit deeper. It had a cloak of lies around it initially and now it is all but forgotten.

Mr Caruba, if Assad goes, it's more likely that a fundementalist group or grouping can take over. I am not for Assad, but what worries me most of all is that AlQuida groups are plentiful in this conflict. Israel will bear the brunt if radicals take the power. At this moment Syria leaves Israel alone.

Alan,
I haven't forgotten about Benghazi and I hope it comes back to bite Obama big time.
Your comment about Islam being a kind of mental disease is priceless...well said! "They destroy everything they touch" reminds me of all those Californians moving to other states like Colorado and Montana. Too many of them are bringing the "California mentality" with them.

Whatever follows Assad is likely to be much much worse.

dfordoom: You've got that right.