Obama Could Not Pass a Background Check 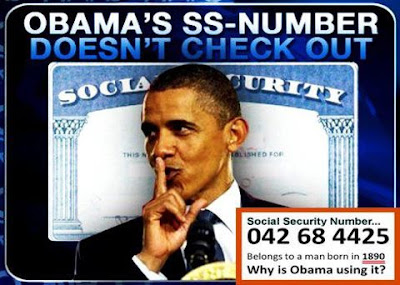 President Barack Obama could not pass a background check if he was applying for a gun permit or a job. Why has this man been allowed to remain in office or take the oath for a second time?

During the 2008 campaign, it was known that:

The birth certificate that the White House released is reputed by document experts to be false.

The Social Security number he has used was issued to someone else. He could not pass an E-Verify test. The first three numbers of his Social Security ID are reserved for applicants with Connecticut addresses, 040-049. The number was issued between 1977 and 1979. Obama’s earliest employment reportedly was in 1975 at a Baskin-Robbins in Oahu, Hawaii.

Many of the “facts” he cited in his two memoirs have turned out to be questionable, if not outright lies; particularly as regards his birth father, a citizen of Kenya at the time of his birth.

A job applicant with Obama’s paper trail would not even pass the smell test, but this man was elected and reelected. The role of journalism is to vet the credentials of anyone running for public office, let alone the highest office in the land. Instead, he has been protected against all inquiries and those making them have been called “birthers” or simply ignored.

Obama so routinely lies that keeping track of them would require a team of full-time archivists.

In March 2006, he said “Leadership means the buck stops here…I therefore intend to oppose the effort to increase America’s debt limit.” He is now into his second political battle to raise the debt limit. In July 2011, he said “It is not acceptable for us not to raise the debt ceiling and to allow the U.S. government to default.”

In response to a 1996 questionnaire he said “I favor legalizing same-sex marriages and would fight efforts to prohibit such marriages, but in November 2008 he said, “I believe that marriage is between a man and a woman. I am not in favor of gay marriage.”

He spent his first term blaming the nation’s economic ills on his predecessor, George W. Bush, saying in July 2008, that “he added $4 trillion by his lonesome, so that we now have over $9 trillion in debt that we are going to have to pay back. That’s irresponsible. It’s unpatriotic.” Today, the debt stands at more than $16 trillion because Obama added more to the debt than all previous presidents combined. For the first time in U.S. history, our credit rating was reduced and rating services are warning they will reduce it again.

He has a record of using executive orders to bypass the constitutional powers and duties of Congress. His most recent effort was 23 such orders regarding gun control at the same time Americans are buying guns as fast as they can, fearing the loss of the right to own and bear arms. This is the same President who just signed a law granting him and his family lifetime Secret Service protection.

He used “executive privilege” to cover-up the “Fast and Furious” scandal in which guns were allowed to be purchased and transported for use by Mexican drug cartel members.

He lied about the attack in Benghazi, Libya that killed a U.S. ambassador and encouraged members of his staff to spread the lie that it was “spontaneous” and the result of a video no one has seen.

He and the Democratic Party imposed “Obamacare” on the nation and its passage is already undermining the provision of healthcare services, driving up the cost of health insurance, and causing physicians and the providers of testing and other services to leave the profession and close their doors.

He no longer can blame President Bush, so now he blames the Republican Party that has offered solutions to the nation’s economic crisis that has worsened every day he has been in office. His foreign policy has consisted of apologizing for America and standing aside while one nation after another in the Middle East and northern Africa has fallen under the control of Islamist radicals. He is doing nothing to avoid the sequestration cuts that would harm national defense and a range of other government functions.

It has taken four years for a case challenging his right to hold office and the Supreme Court has scheduled a “conference” in February that might decide to ignore a current case.

The mainstream media has failed us and we only hope the courts will not fail us.

He should not be administered the oath of office for a second time.

Come one Alan, really? Why are you starting to sound like Alex Jones with the wacky conspiracy theories. The claim that you are making about BHO's ssn are completely off the mark, this can be verified on snopes...http://www.snopes.com/politics/obama/birthers/ssn.asp

You claim to abhor journalists who do not research their information properly, yet do the same thing.

I don't like the man and I think he is bad for the country, but you make it worse by passing off this insane stuff.

I hear enough crazy conspiracy theories that I don't need to hear more.

Snopes is not a reliable source of information. As for O's SS number, it is the basis for a court case challenging him that reached the Fifth Circuit Court of Appeals and will be the subject of a SCOTUS conference in February. The facts about it are well established.

And just think, if this is all true and the Courts have the huevos to actually remove Obama, we get Joe Biden...

"He should not be administered the oath of office for a second time."

Oh, but he will be Alan. They have had 4 years to expose this liar and they have failed. No one in the government has had the guts to tell the truth.

BTW - I have an issue with the following: "Obama added more to the debt than all previous presidents combined" - should this not read up until Bush Jnr as the debt was around $9 trillion when Obama came into office. Of am I understanding this incorrectly?

@LoupGarou: Snopes? Seriously?? No wonder America is in such a mess when people rely on Snopes for their 'facts'. It's like asking a fox to guard the hens.

You're coming right along, Alan.

Alan...Facts mean little to the lemmings that NEED to follow...they have no other recourse...sorta like "who'd I hitch my pony to???"

LoupGarou, Obama's handlers and media lapdogs have been working overtime to slap a variety of demeaning labels on anyone who dares to bring any of these issues up. Based on your comment, you have evidently bitten on that meme and swallowed it, hook, line, and sinker.

Critical thinking and asking questions are the foundation of any free society. We have a President who promised us the most "transparent" administration in history, yet he's sealed all his personal records and completely obscured his entire history and background from public view...

Meanwhile, over the past four years, he's personally attacked the American people on multiple fronts and usurped our Constitution numerous times. He's given us plenty of reason to question whether he really has the best interests of this country and it's people in mind. Only a complete idiot would turn a blind eye to those things and assume that there's nothing to worry about, just because the media threatens to call us names if we don't...

He's our PRESIDENT. We deserve to know, with certainty, who he is, where he came from, and where his allegiances lie, and if the media won't do their job and vet him, we will.

I pray that the Supreme Court comes through this time and investigates this matter thoroughly and without bias, but I'm not too optimistic. They really stabbed us in the back with the Obamacare decision, and I have no reason to believe that they aren't going to cave on this issue as well. The fact that Obama was able to upset the conservative majority on such a critical issue reveals just how deep the corruption and power runs in this administration, and that doesn't bode well for the future of this country ...

I would like to state that when this first came out I thought it was one of the looniest things I had ever seen. However, after a few months it became obvious that they were spending enormous amounts of money to keep virtually every bit of historical paper work on this man secret. Why? What is being hidden? People don’t spend bookoo bucks for no reason.

When John McCain’s citizenship was contested he provided all the documents necessary to prove that he was a valid candidate. Why not the just turn over everything that is in the files that the press normally demands from candidates. School records, financial records, …..birth certificates…especially one that isn’t an obvious computer generated fraud….etc.

In the intelligence community it is generally understood that when someone has a secret it means there is something they don’t want others to know. They want to know what is being hidden and why.

I am inclined to believe that if we can get an answer to “Why?” and “What is being hidden”… this whole thing can be resolved.

Rich, this will be resolved when they start making snowmen in Hell. Possibly, well into the future, we may learn the truth, but by then (if not now) it will be too late.

@TexasFred: Fred the courts can't remove a President, only Congress may do that (read the Constitution).

The courts CAN, however, fact-find and build a legal record of the claims and facts about Obama. The court can order an opening of Obama's "sealed" records (some records "sealed" BTW with an executive order O signed on his 1st day in office in)

If any of the documents are shown to be fake, then, hopefully, the media and Congress would finally become interested. Maybe he'd resign if his documents are "outed", but I doubt it. It would be up to the media to educate the public and for the House to pass Articles of Impeachment. Doubtful, at this point, they'd do that.


@LoupGarou-Alan did a good job of fairly laying-out the information. Aren't you interested in finding the TRUTH, whatever it is?
I think, at a minimum, O's Selective Service Registration card is an fraud--any "low information voter"--should see the date stamp is not a legal USPO stamp. If he didn't register, the law states anyone that DOESN'T comply with the law can't hold public (federal) office, including the office of POTUS.

A Pew poll recently showed over 60% of Americans think Obama is hiding something in his documents, so there's something not right with his information.

I really hope the SCOTUS remands the case back to the district US court to develop the facts on an expedited basis. Who knows what another 4 years will do to the country.

Thanks again Alan for your site--keep up the great work

“Congratulations ADMIN! Thank you so much for taking the time to share this exciting information.”