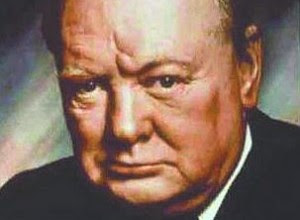 
An older generation of Americans who lived through World War II recall the British Prime Minister, Winston Churchill, who John F. Kennedy said, “In the dark days and darker nights when England stood alone and most men save Englishmen despaired of England’s life, he mobilized the English language and sent it into battle.”


As Margaret Thatcher is laid to rest with full honors, it would be well to recall that she would not have been Prime Minister if there had not been a Winston Churchill. Against the most daunting odds, he mobilized England against the threat of Nazi Germany and its allies, Italy and Japan. After World War Two broke out in 1939, England would wait years before the United States joined the war after having been attacked by the Empire of Japan in 1941.


America had a strong isolationist streak from the years before it joined the allies to defeat Germany in World War I and it remained strong as the Nazis seized control of one European nation after another in the 1930s and 40s. Churchill knew that if England was to survive, he had to strengthen the bonds between America and England. It was a task to which he had devoted his life.


It was by any measure, an extraordinary life. His mother, Jennie Jerome, was an American, born in Brooklyn in 1854, the daughter of a leading American entrepreneur. Churchill’s father was Randolph Churchill, the son of the Eighth Duke of Marlborough. On November 30, 1874, Winston was born. On April 9, 1963, Churchill received an honorary citizenship from the United States. He would live until January 24, 1965, dying at age ninety.


A book by his official biographer, the historian Martin Gilbert, “Churchill and America”, tells the story of his long love of America, one that was returned by generations of Americans who shared their times with him. Churchill was, contrary to what one might expect, not born into great wealth, but his parents did rank among British aristocracy. Churchill loved his parents, as he put it, “from a distance.” What he had inherited from them was a prodigious intelligence, courage, and a tenacity that his contemporaries understood would rescue them after earlier prime ministers had failed to act against the threat of Hitler.


Churchill’s relationship with Franklin D. Roosevelt mirrored in some ways that which Margaret Thatcher had with Ronald Reagan. Like Churchill, they were comfortable in their own skin and possessed principles that valued liberty and freedom in the face of aggression. Like Churchill before them, they understood the threat of Communism in the form of the Soviet Union that Reagan openly called “the evil empire.”


Thatcher, the first and thus far the only woman PM, showed her grit when she rescued England from its steep decline, battling the trade unions and other forces, and succeeding to a point that the news of her death reawakened the enmity they felt for her when she lived.


At age 25, in 1900, Churchill was first elected to Parliament. He would serve there, with only a two-year break, for more than sixty years. He would hold a variety of roles as part of PM’s cabinets, all of which prepared him for the years he would serve in that post. Throughout those years, Churchill was uncannily prescient in identifying the trends of his time and, throughout those years, he remained enamored of America.


While his fame rested on his achievements in government, his wealth was based in a prodigious writing talent, particularly in the arena of history. He wrote many books and many magazine articles. Another source of wealth came from the many speaking tours he had, touring the U.S. In the course of his visits, he came to know many outstanding leaders in business and government here and his admiration for them was reciprocated.


Even so, he would have to labor long and hard to bring America into the war before the attack on Pearl Harbor facilitated it. “Apparently, you always have to have a disaster before anything sensible can be done which would prevent it.” In 1939, he joined the War Cabinet as First Lord of the Admiralty.


The generations since World War II cannot imagine the threat that existed in those days. In 1940 when Churchill became Prime Minister, he had been in office just thirty-six days as Germany conquered Denmark, Norway, Belgium, Holland, Luxembourg, and France. FDR did what he could to assist England but was hampered by a Neutrality Act that imposed difficulties; American opinion and the need to be reelected made action difficult as well.


We can, with the benefit of hindsight, look back and say that it all turned out as it was supposed to, but Churchill had to deal with an unknown future, a nation that had been weakened by World War I, and one that was in great need of ships, the weapons of war, and munitions.
Americans may think that the Normandy landings on June 6, 1944 were an American victory, but it was in fact the culmination of intensive Anglo-American planning. U.S. soldiers, sailors and airmen were joined by 61,715 British and Canadian troops. At war’s end, Churchill’s political party lost the majority in Parliament and he was required to step aside. He would be returned as Prime Minister from 1951 to 1955.


Margaret Thatcher once said,"I had the patriotic conviction that, given great leadership of the sort I heard from Winston Churchill in the radio broadcasts to which we listened, there was almost nothing that the British people could not do."
She well knew the lessons of Churchill’s life and leadership in the gravest years of England’s history. In addition to her own indomitable character, she could draw on Churchill’s example. Americans owe a debt of gratitude to both of them.
© Alan Caruba, 2013
Posted by Alan Caruba at 2:11 PM

I screwed up the dates. I am a tad dyslectic and have problems in that area. Thanks for calling this to me attention. I have revised he graph.