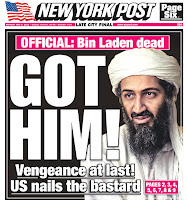 Thursday, May 2, is a day to be especially watchful. Jihadists are particularly fond of celebrating anniversaries and on that day in 2011 Seal Team Six found and killed Osama bin Laden. September 11. 2001 is now an indelible part of U.S. history and on September 11, 2012, jihadists attacked and killed an American ambassador and three others.


The threat that Islam presents to America in particular and the world in general is beginning to influence what non-Muslims think of this death cult.


In a recent commentary, the Dr. Daniel Pipes, president of the Middle East Forum, referred to the process by which opinion in democratic nations turns against Islam as “education by murder.”


Dr. Pipes was sanguine regarding the American response to the Boston Marathon attack. He did not foresee any increase in security measures or a greater preparedness for what he called “sudden jihad syndrome” violence. Even so, he said “High profile terrorism in the West—9/11, Bali, Madrid, Beslan, London—moves opinion more than anything else.”


A new report about the Islamist terrorist threat, “Al Qaeda in the United States”, issued by the Henry Jackson Society, a British-based think tank, noted that, of the 171 al Qaeda related or inspired acts of terrorism from 1997 to 2011, 54% were by American citizens, some naturalized, but more than a third (36%) were born in the U.S., concluding that this statistic dispels the myth that the terrorist threat is primarily external.”


I keep wondering how long it will be before Americans will begin to take seriously the threat that Islam represents. The list of attacks is a long one such as the 1982 attack on the U.S. embassy in Beirut and the 1983 attack on the U.S. Marine Barracks after Reagan sent them there as peacekeepers. The first attack on the World Trade Center was in 1993. In October 2000, the USS Cole was attacked. On September 11, 2001, the second attack killed 3,000 Americans. When George W. Bush came into office, he told his national security advisor, Condoleeza Rice, that he was “tired of swatting flies.”


President Obama’s approach to Islam was initially one of outreach and accommodation. The fact that his father was a Muslim and that he had spent his youth in Indonesia as the adopted son of a Muslim no doubt influenced this and many believe he remains a Muslim despite his denials.


Despite the fact that the search for bin laden began following 9/11, Obama took credit for the having found and killed him. No credit was publicly given to Bush who he had relentlessly criticized for the wars in Afghanistan and Iraq.


My friend, Amil Amani, has labored long and hard to educate Americans about Islam. At one point, responding to a critic who defended Islam, he said “Islam is a culture of death. Islam is a comprehensive totalitarian form of slavery. It is the opposite of freedom. Its very name, Islam means submission or surrender. True to its name, Islam strives for nothing short of enslavement of the body of humanity as well as the bondage of its mind. This non-negotiable surrender to Islam requires the individual, as well as the society, to disenfranchise themselves of many of the fundamental and deeply cherished human rights.”


In 1998 the founder of al Qaeda, Osama bin Laden, issued a World Islamic Front statement, “Jihad Against Jews and Crusaders”, meaning Christians. He quoted Mohammed. “I have been sent with the sword between my hands to ensure that no one but Allah is worshipped, Allah who put my livelihood under the shadow of my spear and who inflicts humiliation and scorn on those who disobey my orders.”


Bin Laden issued “the ruling to kill Americans and their allies—civilians and military—is an individual duty for every Muslim who can do it in any country in which it is possible to do it, in order to liberate the al-Aqsa mosque (Mecca) from their grip, and in order for their armies to move out of all the lands of Islam, defeated and unable to threaten any Muslim.”


President Obama labored through his first term to remove American troops from Iraq and has sent 2014 as the year they leave Afghanistan.


Bin Laden’s call and the instructions of Mohammed are the driving force behind the efforts of Muslims in nations throughout the world to wage war and we are witnessing that effort. So long as President Obama remains in office the effort to thwart that war will be muted.


His closest advisors and those in his cabinet such as Janet Napolitano, in charge of the Department of Homeland Security, will continue to tell Americans that a successful effort is being waged. It is not.


On May 2 and every day for a very long time to come, Americans will be on the front lines of the war on terrorism, the war between Islam and America, the war against the world.

We won't be going anywhere that day, Becky sleeps in because Thursday night she goes back to work... None of her drivers speak Arabic, just Spanish, so, I guess we're OK...

I will check under my bed just to make sure Mohammed isn't there.

Sir,
Bin Laden like any Muslim monarchs dreamt of expansion but he had different attitude and vengeance in his mind. Reportedly he was a drug pedlar having contacts with Texas family.He had a mysterious death in a safehouse provided by Pakistan Army in which there are so many US moles.
Find be reasons to celebrate as it was not an achievement at all. It was a very good operation no doubt, a good picture can be made like,"Operation Entebbe"
As far as general awareness of UD citizens on Islam, by and large people know it but rest of the world view it different from Economic angle. How could a problem of Golan Heights has shaped up so different in 40 years?
I do visualize, all Islamic countries will get united like herd of blue bulls di at night but few equipped with WMD may react out of sheer mad fit of Islamic frustration.
Pray all goes well !

Vimal, "a drug dealer having contacts with Texas family"? This is wild speculation based on rumor. And there was nothing "mysterious" about his death. He was killed by a Seal Team at the direction of the President. And the Golan Heights has nothing to do with what is occurring in the Middle East, except in the most peripheral way. After Syria made war on Israel, it was captured and annexed.

I welcome you're taking the time to share your point of view, but try to get your facts straight.