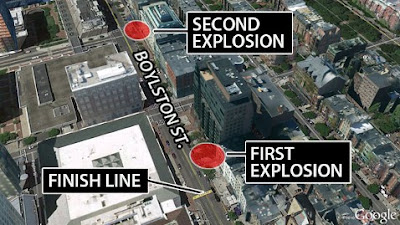 
In his short statement following the bombing of the Boston marathoners on Monday, the President did not say either “terror” or “terrorist.” This is an administration that has virtually banished these words, but an unidentified “White House official” did say that it was an act of terrorism within hours after the blast.


On June 1, 2009, Abuljakim Muhammed, a Muslim convert from Memphis, Tennessee, was charged with shooting two soldiers outside a military recruiting center in Little Rock, Arkansas. One died and the other was wounded. He claimed ties to al Qaeda and said the attack was “to fight those who wage war on Islam and Muslims.”


Later that year, on December 25, a Nigerian on a flight from Amsterdam to Detroit, attempted to ignite an explosive device hidden in his underwear. It failed to detonate and, when taken into custody, instead of being treated as a combatant in war, he was read his Miranda rights. It is noteworthy that he was already on a government watch list thanks to a warning from his father!


In 2010, a car bomb was discovered in Times Square, New York City. It had ignited but failed to detonate. Faisal Shahzad pleaded guilty to the bomb attempt and ten other terrorism and weapons charges.


Since September 11, 2001, America has been remarkably free of terrorist acts on our soil. I wish I could credit the Department of Homeland Security and the other intelligence agencies we maintain at the cost of billions annually, but it only takes one incident like Boston to remind us that one terrorist can wreak havoc with a bomb or two. Reportedly, New York City detected and deterred sixteen comparable plots since 9/11.


What we have witnessed from the President and his administration has been a display of weakness in the face of threats from the Middle East and elsewhere around the world. Our current Secretary of State has said he’s willing to speak directly with North Korea’s leaders, a very major concession in the face of behavior that should have gotten a major slap-down.


The bombing should make us ask why this administration is sending airplanes and tanks to Egypt, currently in the grip of an extremist Islamist government whose president is a former leader of the Muslim Brotherhood. It should make us ask why the administration continues to go through the motions of getting a peace agreement out of the Palestinians when they have spent decades refusing any terms for peace with the Israelis.


More specifically, the bombing has the earmarks of an al Qaeda-inspired attack. In recent times they have been encouraging individuals to undertake such attacks and the information they need to make bombs is readily available from jihadist websites.


Meanwhile, the bombing will ripple out throughout our society, just as the 9/11 attacks did. No doubt it will serve as an excuse to ratchet up what passes for security procedures. DHS is probably adding to a new list of budget requests from Congress. It received $46.9 billion in fiscal 2012. However, it is the FBI that is the lead criminal investigation agency for the Boston bombing and, thankfully, is independent of DHS.


A lot of Americans are going to think twice about attending any event where there are large numbers of people. It’s likely to empty out stadiums and arenas for a while. The crowds at the Macy’s Day Parade and comparable events may be thinner this year.


This is not a good time to be telling Americans they have to register their guns in triplicate or that background checks will have any effect on public safety. The recent spate of mass killers all were crazier than Charlie Manson, nor is it a good time for yet another doomed-to-fail plan to address illegal immigration; build a fence and then figure out what else to do.


The lesson to draw at this point is that we are all in for a generation or more of events like the Boston Marathon bombing.

It has certainly already been going on for generations, at least since the 1972 grabbing and murder of the Israeli Olympic team, the "highlight" of the Olympic games then (in Munich, Germany, as I recall).

People need to see the Islamic terrorist threat as a replay of the American Indian wars of the 19th century: Between warrior tribes and modern civilization. Islam is not just a religion, in this view, but an all-encompassing "way of life", buttressed by thousands of years of tribal dogma and a careless, aggressive and vicious dismissal of others' ways of life. Divisive tribal ways are once again surging in the world, to the detriment of civilization.

Has anyone else noted the sheer number of terrorist attacks and/or mass shootings in our country since the election of 2008?

I am holding off on opining on this one until we have some seriously accurate evidence presented... Somehow I can't shake a nagging feeling that this is a *domestic* job...

As I say in my post today, I expect more of these attacks in Obummer's second term. And, yes, there have been a number of crazies killing people, but they are different from jihadist bombers.