Israel is the Miracle 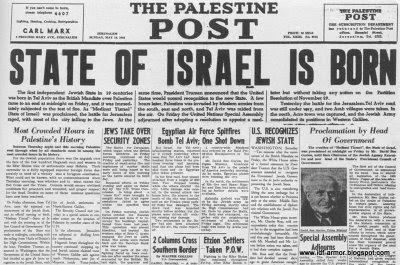 
As Israel celebrates its independence on April 16 this year, it is worth pausing to consider that, while there are many miracles in the Bible, modern man has a hard time seeing a miracle when it occurs. Secular societies in the West have tended to make a gospel of science and many in those societies are doubtful that God plays a role in our lives these days.

I am reminded, though, of a quote by Albert Einstein who said, “Science without religion is lame. Religion without science is blind.”

I am not a particularly religious person if one is judged by the usual indicators of belief, but I remain convinced that there is a greater power that plays its role through the life of the church, the synagogue, and the temple. I regard Islam as a warrior cult that has the trappings of religion, but which has posed a threat to all other religions since it began in 632 AD. It is the epitome of intolerance and devoted to submission.

I have, however, a miracle for you and it occurred on May 14, 1948 when the ancient state of Israel was reborn, resurrected if you will, declaring its sovereignty after a long absence from the year c. 1020 BCE when the Jewish monarchy was established, first with Saul, then with David, and then with his son, Solomon. Around c. 1,000 BCE, David made Jerusalem his capital and Solomon built the first temple c. 960 BCE.

Editor’s note: Yom Ha’atzmaut, Israel’s Independence Day, as cited above is the Gregorian date. The lunar-based Hebrew calendar, the fifth day of Iyar, causes the date to shift from year to year.

In 70 AD when the Romans destroyed the second Temple and drove the Jews into exile one might have assumed that Israel was no more. The name “Palestine” was created by the Romans in an effort to eliminate the memory of Israel. How could a people with no physical nation survive? The answer is that the Jews had the Torah, the Old Testament and the body of wisdom that would be gathered in the Talmud. They had an indestructible faith in God.

In the wake of the Holocaust during World War II, the Jews were like Job (13:15) who said, “Though He slay me, yet will I trust in Him: but I will defend my own ways before Him.” Christians focus on the individual sacrifice of Jesus whom they believe to be the son of God, but what of the six million Jews who died for having been God’s chosen people? I doubt that theologians want to grapple with that question. And neither do I. Believe what you will, but don’t discount miracles.

When David Ben Gurion declared the founding of Israel on May 14, 1948 he said, “In the land of Israel the Jewish people came to be; in it their spiritual, religious and political character was formed; in it they had lives of self-governance; in it they created national and universal treasures of culture and bestowed upon the entire world the eternal Book of books.”

“After the people were forcibly exiled from their land they kept the faith with it in all the lands of their dispersion, and never ceased praying and hoping to return to their land.” And they did! return.

Jerusalem was once again the capital of Israel and, within hours, Israel was attacked by Egypt, Lebanon, Syria, Jordan, and Iraq. A truce was arranged on June 11, 1948, but land designated for the new state has been seized and Jordanian troops expelled Jews from the old city of Jerusalem. When hostilities began again on July 8, the war went better for the Israelis.

In its first year Israel absorbed 200,000 new immigrants; Jews who had survived the Holocaust and many who were forced to flee their homelands in the Arab nations. In time, vast numbers of Russian Jews would emigrate. Christian Arabs and others came. Today, Christians are under attack throughout the Middle East and there is, it must be said, a strange silence from Christians around the world. Attacks on Christianity here at home are met with a largely muted response.

Other wars followed; the Six-Day War in 1967 and the Yom Kippur War in 1973. In both cases the Arabs had far greater numbers. Israel would fight five wars in its 66 years and would face years of terrorism. It continues to be rocketed from Gaza, a strip of land it voluntarily evacuated and ceded to the Arabs who had adopted the name, “Palestinians.”

A word about the “Palestinians”; Jerusalem is mentioned more than 700 times in the canon of Jewish scriptures. It is not mentioned even once in the Koran. Mohammed never visited Jerusalem and Muslims pray with their back to it, facing Mecca. The Arabs are represented by 22 nations, but the “Palestinians” are not recognized as a nation, nor ever were a nation. The Palestinian Liberation Organization’s charter still calls for the destruction of the State of Israel, as does that of Hamas.

You cannot make peace with people who want to kill you.

In addition to the Arabs, the United Nations has metastasized into the leading enemy of Israel, never ceasing to pass resolutions against it, maintaining the UN Relief and Works Agency decades after the first war to destroy Israel. It has the distinction of being the oldest refugee organization and all the rest of the world’s refugees since then have either been repatriated or settled elsewhere, and the “Palestinians”, as often as not, are denied citizenship in Arab nations.

Israel is a Jewish state, but according to Wikipedia, “the Arab population in 2010 was estimated at 1,617,000, representing 20.5% of the country's population. Most of the Arabs living in East Jerusalem and the Golan Heights, occupied by Israel in the Six Day War of 1967 and later annexed, were offered Israeli citizenship, but most have refused, not wanting to recognize Israeli sovereignty. They became permanent residents. They have the right to apply for citizenship, are entitled to municipal services, and have municipal voting rights.”
Israel recognizes the right of all religions to be celebrated there. It protects the sacred sites of Christians and Muslims. I do not expect peace between Israel, Arab states or Iran, and least of all with the so-called “Palestinians.” I do not expect peace between Islam and all other faiths.

I expect, however, that Israel will be celebrating many more anniversaries of its independence. If Israel was to perish from a nuclear or bio-chemical attack, the whole world would need another miracle.