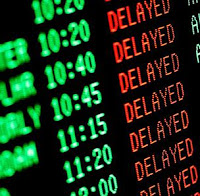 Why is it that everything that has Obama’s fingerprints on it has an expensive and idiotic component to it? The latest are the airline delays, but spineless Americans simply wait around as delayed flights steal their time and productivity, and harm the economy.

Sequestration was Obama’s idea, a device to force a bi-partisan congressional committee to accept budget cuts based on the Simpson-Bowes Commission’s recommendations. The committee failed thanks to the political gridlock in Washington. We are afflicted by 100 Senators and 435 Representatives who are incapable of applying common sense and fiscal solutions to an economy whose problems can too often be traced back to existing government programs.

The sequestration cuts mean that the Federal Aviation Administration’s 47,000 employees now face a day of furlough per two-week period, meaning that on average there are 10% fewer workers on any given day. There are 14,750 air traffic controllers, including trainees. Do Americans really want to travel under such conditions? No, but there has been no vocal outrage, no demands to restore the FAA budget to avoid needless delays? And no demand for stronger congressional oversight of how it spends its public funding.

Starting Monday flights were delayed an average of up to two hours or more across the nation, the first weekday in which airlines labored under the air controller cuts. The New York Times reported that “airline executives were furious over how the aviation agency was seeking to impose the maximum possible pain for passengers to make a political point. The airlines had hoped that Congress would intervene and restore some of the financing, but so far lawmakers had not acted to help the FAA”

Sen. Tom Coburn (R-OK) said last week that the FAA “has made zero effort” to avoid the furloughs. “The FAA’s decision is a dangerous political stunt that could jeopardize the safety and security of air travelers.”

In March The Wall Street Journal reported that “The sequestration requires the FAA to cut $637 million or 5% of the $12.5 billion of its annual budget that is not exempt. Because the cuts have to be made by the end of the fiscal year on September 30, instead of over the whole year, they are closer to 10%.”

The delays suffered by the traveling public are the most obvious problem, but it is much larger. A study released by the Aerospace Industries Association and Econsult Corporation estimates that FAA budget cuts could cost up to 132,000 aviation jobs, sap $80 billion a year annually by 2035 from the nation’s gross domestic product, cause an annual decrease of 37 to 73 million enplanements, and strip almost two billion pounds of freight capacity out of an air cargo system that is already bulking at the seams.

A former Secretary of Transportation and Congressman, Norman Mineta, said “The FAA is a critical safety organization that regulates our national air transportation system. Putting it at risk is folly beyond comparison.”

While the President flies around the nation on Airforce One, attending events resulting from the Boston bombings, the West, Texas explosion, going to fundraising events (next one on Thursday), and on vacations, he has taken scant notice of the impact of sequestration on air travel and has had little, if anything, to say about it.

He will, however, as we close in on the 2014 midterm elections, blame everything on the Republicans because that’s what he’s good at, blaming others.

The sequestration was a reduction in the annual amount of increase. No existing operating funds were cut. Why can't anyone understand this basic explanation.

It is sheer politics, and the media should report it as such.

The people, on the whole, are little more than sheep these days. The majority just follow along like zombies. Bruce, you know that, Alan knows that, and I know that. I would say that, maybe 20% of Americans know it. We are not the ones in power, the media is merely a propaganda arm for the gov't so it doesn't get air time. And since the rest of the sheep can't tear themselves away from Dancing with the Stars, or are O-zombies, Things continue to deteriorate without any resistance.

Intentionally inflicting pain and discomfort on the American people for political gain? That sounds an awful lot like treason to me ...