Iraq in the Rear View Mirror


March marked the ten year anniversary of the invasion of Iraq in 2003 that deposed Saddam Hussein. In early April the battle for Baghdad was concluded, but America’s initial success was followed by years of further conflict and terrorism against our troops.


The U.S. stayed on to occupy a nation whose fundamental institutions, its police, army, and a new government had to be re-built from scratch. It wasn’t that they didn’t exist before, but that none had the slightest concept of respect for the law, individual rights, and governance that wasn’t centered in the brutal grasp of a psychopath and his Baath Party sycophants.


It is widely agreed now that there were no weapons of mass destruction, but at the time it was believed by the intelligence agencies of the coalition nations that they did exist. Essentially, however, America invaded Iraq in 2003 for a reason that did not exist. 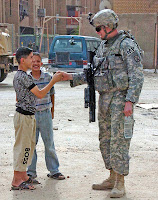 We stayed on because the Powell Doctrine, named for Colin Powell, Bush’s first Secretary of State and former chairman of the Joint Chiefs, who said “if you break it, you own it.” The initial invasion, including “shock and awe”, was a successful military action, but when our troops arrived in Baghdad shortly thereafter, it was swiftly evident that the city and the nation were in chaos.


The Pentagon planners had not anticipated how bad it would be and gave little indication they understood anything about the people or their culture. Indeed, much of the planning was flawed, leaving the U.S. military to “go to war with what you have” in the words of then Secretary of Defense, Donald Rumsfeld. There was NO planning for that reconstruction, nor understanding of the need to win the trust of Iraqis.


What we had were soldiers wearing Vietnam-era flak jackets that were essentially useless as well as Hummers that were not protected against explosives or much else. Anticipating a gas attack, soldiers had to wear protective clothing in addition to their uniforms and all the gear they had to carry on their backs. In the summer heat of Iraq it was debilitating, but adding to that were the logistical supply failures that threatened to leave the troops without food or water. Iraqi citizens were even more at risk.

An excellent analysis and report of what that first year was like is provided by “Breaking Iraq: The Ten Mistakes That Broke Iraq” by Colonel Ted Spain, U.S. Army (ret) and Terry Turchie, Dept. Asst. Director, FBA (ret). Col. Spain was the commander of the 18th Military Police (MP) Brigade.


Col. Spain writes “I knew very well what my mission would be in Iraq. In the midst of an invasion of a nation and the ouster of a dictator, my soldiers and I would be largely responsible for replacing decades of tyranny with institutions, people, and philosophies that would provide a foundation in Iraq for the rule of law.”  That would need senior political and military leaders who understood the complexities.” For the most part, they did not. Generals are expected to kill the enemy and destroy their will to fight on. MPs are expected to restore or establish order where there is none; much depended on being able to swiftly retrain Saddam’s police in the midst of a battle zone in a culture were Saddam and his Baathist Party had been the law. Suffice to say, respect for the rule of law did not exist.


On the ground, Col. Spain knew going in that “We never really had enough military police to take on all our responsibilities—jails, prisons, police training, and patrols.” It was a daunting task made more difficult by a chain of command in the zone of combat and up the line to the Pentagon and the White House that had little grasp of the culture, people, and nation they had invaded. “I began to feel pretty certain that the lack of pre-war decisions about how we planned to transition Iraq to a country bound by the rule of law had to do more with the enormous complexity of the concept and not from a devious and uncaring conspiracy.”


The appointment of Gen, David Petreaus had much to do with whatever success the U.S. military achieved in the early years of the war. The U.S. military had some excellent commanders, but it also had some who simply did not understand the need to get the population on our side as swiftly as possible.


“Our methods of trying to bring the rule of law to Iraq and establish law and order through trust and respect were shoved aside by military and civilian leaders who simply didn’t know what they were doing and had no understanding of the role of law enforcement in a democracy.” Despite their best efforts, “Iraq collapsed into near civil war and open insurrection.”


In that first year and those that followed some of the population still wanted to fight us, settle scores with rival sects, and were allied with al Qaeda. A year after the invasion, incompetence would result in the scandal of detainee abuse at Abu Ghraib prison. In the end, the Iraq war would stretch out longer than the war we fought in Vietnam and the U.S. would be told to leave.


Students of modern warfare will benefit greatly from reading “Breaking Iraq” and others will gain valuable insight to that first year and what occurred in its wake. President Obama made no secret of his desire to get out of Afghanistan despite increasing troop strength in Afghanistan in his first term. The State Department dropped the ball on a status of forces agreement in Iraq. It explains why he did not take the lead in the Libyan insurrection and why he does not want to put boots on the ground in Syria. He’s likely to do nothing militarily with regard to Iran’s acquisition of nuclear weapons.


History is made by the decisions made or not made by a nation’s leaders and will be examined for years to come regarding the Iraq invasion and the subsequent results. Americans can take great pride in our fighting forces, the young men and women who bore the burden. The outcome, however, of the past decade was largely a failure of planning and, more importantly, understanding Iraq and, by extension, the entire Middle East.

Seems to me the actual (not the stated) plan was to surround Iran by invading Iraq and Afghanistan, convert them to democratic republics, and then let the Iranians convert themselves.

The problem, it seems, was overestimating the will and ability of the Iraqi and Afghani populations to rule themselves. Democratic republics only work with a population of grown-ups.

Which, incidently, is why America is falling apart now -- not enough grown-ups around anymore.

It's the price you pay when you invade another country on the back of emotions rather than necessary action. As much as I support America in most things, I didn't agree with them on the Iraqi or the Afghanistan invasions. If people within the country are unhappy with their leaders then it's up to the people to change it from within. Just the threat of a big stick should be enough - and only using it when it is required should be the motto. Take as an example the North Korean issue. This is a prime example of when America should flex it's muscles. That alone would warn the world of your might. Iraq and Afghanistan have been a waste of not only money, but LIVES. And for what? Both countries are going to return to what they were before America invaded - Muslim hell-holes - and they'll probably end up in a worse state than before. Meantime countless young Americans have died needlessly.

It has always stunned me how the Iraq war was won so quickly and the peace was lost so slowly. It was painful to see the hope fade as the country crumbled into lawlessness.

We were totally unprepared and ill-equipped to rebuild Iraqi institutions after the overthrow of Sadam Hussein.

Will look forward to reading this book - have added it to my Amazon wishlist.

The military might, relations, and religion between the lives of the people of the countries of Iraq, Afghanistan, Iran and surrounding countries are what dictate how the people will evolve. Ever since the 1970`s America has been seen as a western nuisance. When a conflict strains rule, the ruler needs assistance, or we are forced to interject to protect our own interests.
Every generation of people in the Fertile Crescent and surrounding areas have known conflict since time immemorial. The evolution of the people in the region has depended on religious domination as well as the influence of military might of the neighboring countries. Saddam Hussein gassed the soldiers of Iran during the conflict of the 1970`s. He then turned on Shiite populous of Iraq. The oppressed Shiite people, who at the time and continue to be a majority, sought help from the Iran. Saddam was afraid of this, so he did what he thought he needed sacrificing any sense of humanity to destroy a people. He paid for his crimes with his life. When we fought in Iraq, we fought for our brothers and sisters to our left and right, we fought to get Saddam out of power, we fought for the lives of the people of Iraq both Sunni and Shiite. We had limited resources and we did the best we could with what we possessed.

Alan, I think you would enjoy the book "Extreme Prejudice" by Susan Lindauer. It is not well written, and it strains credibility until you research her references, e.g. the court documents for the hearing under Judge Michael Mukasey. Susan was a CIA/Defense Asset assigned to Libya and Iraq from the Lockerbie plane bomb until the just prior to the 2003 invasion of Iraq when she was arrested and held without due process under the Patriot Act. The federal prosecutors tried to have her involuntarily drugged while in prison. Bush, McCain, Colin Powell, Andy Card and more knew about this. She was released days before Obama took office.