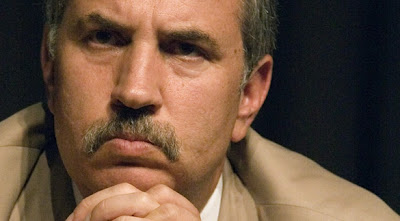 What kind of idiot would write, “Until we fully understand what turned two brothers who allegedly perpetrated the Boston Marathon bombings into murderers, it is hard to make any policy recommendation other than this: We need to redouble our efforts to make America stronger and healthier so it remains a vibrant counterexample to whatever bigoted ideology may have gripped these young men.”

“Whatever bigoted ideology”? This is what Thomas L. Friedman of The New York Times wrote on April 21.

Friedman had spent years in Lebanon, first as a reporter for the United Press International from 1979 to 1981. From 1975 to 1990, Lebanon was convulsed by a civil war between its Christian population and Palestinian forces aligned with Syrian-backed Muslims. In 1981 he was hired by the New York Times and won a Pulitzer Prize for his coverage of the 1982 Israeli invasion of Lebanon after years of Katyusha rocket attacks on northern Israel. He also won the George Polk Award for Foreign Reporting.

He would serve as the Times Bureau Chief in Jerusalem from June 1984 to February 1988, receiving a second Pulitzer Prize for his coverage of the first Palestinian intifada. He witnessed Islamic terrorism first hand and learned nothing from it.

If that is not sufficiently moronic, his column, “How to Put America Back Together Again” was devoted to “healing our economy” and his answer was higher taxes in general and a carbon tax in particular. “We need to raise more revenues, in the least painful way possible.”

No, Mr. Friedman, what we need to do is stop spending more than the nation takes in by reducing spending, fixing the tax code, and reforming entitlement programs, but that is never part of the liberal agenda.

He called for a “‘radical center—one much more willing to suggest radically new ideas to raise revenues…the best place to start is with a carbon tax.”  This tax is based on the false assertion that greenhouse gas emissions, particularly carbon dioxide, are causing global warming and/or climate change. It would raise the cost of the use of energy for everyone. It would raise revenue for “investment” in more failed solar energy companies and other crony capitalism that has become the hallmark of the Obama administration.

“A phased-in carbon tax of $20 to $25 a ton could raise around $1 trillion over ten years, as we each pay a few more dimes and quarters for every gallon of gasoline or hour of electricity.” This is easy to say if you are a highly paid Times columnist, author, and public speaker. It is also a formula for inflicting pain on an economy that is dependent for its growth on the use of energy; a nation in which its total recoverable oil, along with Mexico, exceeds 1.7 trillion barrels. That’s the equivalent, based on current use, of enough oil for the next 242 years.

He covered his proposal saying “Yes, a carbon tax is not painless. We would have to, and easily can, cushion the poor from its impact.” Nonsense! Even the poor must purchase gasoline and electricity. And the poor to whom he refers includes the millions of Americans who are unemployed because of Obama administration policies that restrict economy growth. Obama isn’t helping the poor; he is increasing their numbers and increasing more government spending and dependency with food stamps and comparable programs.

Obamacare is already causing companies and businesses to not hire and to put existing staff on a part-time basis. It is driving up the cost of health insurance premiums. It will cause hospitals to close and physicians to stop practicing.

This is typical of the pie-in-the-sky liberal answer to all problems; suck more money out of the pockets of Americans in the name of “infrastructure, preschool education, community colleges and research…” Preschool education is liberal code for earlier indoctrination of a new generation raised to believe that America is the cause of the terrorism directed against it.

His column was laudatory of President Obama and his recent budget proposal, the first since he took office in 2009, but America is suffering as the result of his policies and Friedman thinks he is the answer to our problems, not the cause.

How can a reporter look at Obama’s America where one out of every five families is on food stamps, the actual number of unemployed is estimated to be twenty million or more, and see a nation in need of MORE taxes? Little wonder one of his books is titled “The World is Flat.”

A reporter who spent years covering the war between Muslims and Christians in Lebanon and then later reported from an Israel under siege from the PLO, still cannot comprehend “whatever bigoted ideology” is killing Americans and others around the world and should not be writing columns giving out advice on raising our taxes in the name of an utterly deceitful, environmental attack on energy use.

To understand everything that is wrong with liberalism in America, by all means, read Thomas L. Friedman.

The Quran is the reason the Boston Marathon Bombers did it. Just one verse (5:33) justifies everything to true believer Muslims. See this great new video explaining it in simple terms and help it go viral:

I can not possibly say a stronger amen to the fact that Friedman is truly an idiot. There are over 100 verses in the Koran that tell believers to kill the infidel if he will not convert. Quite a stark contrast to Jesus telling His followers to love their enemies. Will America ever wake up????

Sadly, there are millions of people in this country who share this denial mentality. These people simply REFUSE to face reality. I'm always amazed by how many of the people who refuse to face reality make it through life safely. I suppose it's a testimony to the success of the society we live in. We've managed to overcome nearly every peril, insuring that even the terminally stupid can survive to a ripe old age without falling victim to the numerous perils that would normally cost them their lives in most other societies. They flock together in huge cities, stacked on top of each other like cord wood, secure in the belief that there is safety in numbers. They've come to expect a trouble-free life, and they just assume that government and science will solve any problem that might arise and threaten their continued existence. Self-sufficiency and personal responsibility are completely foreign concepts to these people ...

However, this protected society we've engineered was NOT designed to shield us from the millions of determined adversaries radical Islam is sending our way, determined to upset our way of life and hell-bent on inflicting large-scale death and destruction on us. So far, their efforts have been weak and amateurish in nature, but it's only a matter of time before they succeed on a grand scale and when they do, it won't be in Kansas, or Montana, or Arizona ...it will be in one of our population centers, where millions of these mindless fantasy-dwellers live clustered together in complete denial of the reality of the dangers we face.

Regardless of whether the first successful large scale attack is nuclear, or chemical, or biological, millions of people will die, and only then will these morons finally realize that they've spent their entire lives living in denial, immersed in a fantasy world of their own making. Of course, by then, it will be too late for most of them....

Guy in Ohio has it figured out:
Tragically, a majority of Americans believe all the world's Friedman's and others of his ilk>>>or they are too preoccupied in their own small worlds to even know what the hell is happening. It's just a matter of time before a catastrophic event of monstrous proportions occurs in America precipitating permanent Martial Law and Dictatorship...It's called Obama's Last Hope & Change!