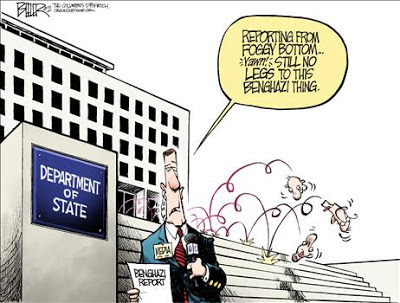 At an April 17 session before the House Foreign Affairs Committee, the new Secretary of State, John Kerry, lightly dismissed the assassination of a U.S. ambassador and three security personnel in Benghazi, Libya, saying “I don't think anybody lied to anybody. And let's find out exactly, together, what happened, because we need -- we got a lot more important things to move on to and get done.”

This has been the party line of the White House since the attack occurred on September 11, 2012. The initial response was to send out the hapless lackey, then-US Ambassador to the United Nations Susan Rice, to tell absurd lies about a video that incited the attack. Even the Libyan president dismissed that.

Operating on the belief that the longer the attack recedes into the past, the less likely it will be a political problem, the administration continues to stonewall. That’s not going to happen. Rep. Trey Gowdy (R-SC), speaking on Fox News on April 27 promised “explosive” congressional hearings regarding the Benghazi attack, saying they are “coming soon.”

Larry Bell, a Forbes columnist, noted that “The House interim report states that ‘reductions of security levels prior to the attacks in Benghazi were approved at the highest levels of the State Department, up to and including Secretary Clinton.’”

Why was there no military response to the events in Benghazi?

Were military assets in the region available? If not, why not? If so, were they alerted?

Were assets deployed to any location in preparation for a rescue or recovery attempt?

Was military assistance requested by the Department of State? If so, what type?

Were any US Army/Navy/USMC assets available to support the US diplomats in Benghazi during the attack?

What, if any, recommendations for military action were made by DOD and the US Africa Command?

What, if any, non-military assistance was provided during the attack?

How many US personnel were injured in Benghazi?

Why have the survivors of the attack not been questioned?

Where are the survivors?

Who was in the White House Situation Room (WHSR) during the entire 8-hour period of the attacks, and was a senior US military officer present?

Where were Leon Panetta and General Martin Dempsey during the crisis, and what inputs and recommendations did they make?

Where were Tom Donilon, the National Security Advisor, Denis McDonough, his deputy, Valerie Jarrett, and John Brennan during the attacks, and what (if any) recommendations or decisions did any of them make?

Why were F-16 fighter aircraft based in Aviano, Italy (less than two hours away), never considered a viable option for disruption (if not dispersal) of the attackers until “boots on the ground” (troop support--General Dempsey’s words) arrived?

Were any strike aircraft (such as an AC-130 gunship) in the area or possibly overhead that would cause former SEAL Tyrone Woods to laser-designate his attacker’s position and call for gunship fire support, thereby revealing his own location that led to his death?

Who gave the order to “STAND DOWN” that was heard repeatedly during the attacks?
What threat warnings existed before the attack, and what were the DOD and DOS responses to those warnings?

What data (which will reveal exact timelines and command decisions) is contained within the various SITREPS, records, logs, videos and recordings maintained by the myriad DOD, Intelligence Community and State Department Command Centers that were monitoring the events in Benghazi as they unfolded?

Why did the Commander-in Chief and Secretary of State never once check in during the night to find out the status of the crisis in Benghazi?

Why are so many agencies now requiring their personnel who were involved in or have access to information regarding the events that took place in Benghazi sign non-disclosure statements?

“As veterans of Special Operations, we find this deeply troubling.” All Americans should find the Benghazi attack and the total lack of response and seeming indifference to it at the highest levels of our government deeply troubling.

If it turns out that the alleged witnesses to the attack begin to turn up dead that would be especially troubling.

I sure hope the obvious cover-up brings down both Obama and Clinton. The media is disgusting in that it is not reporting on Benghazi and the American people should be embarrassed for not demanding the truth. What all this says to me is that our society is crumbling and if I am right on this we deserve it.

Eh, you forgot the most important question: why was security personnel withdrawn, even though Stevens had repeatedly requested in the months and weeks before the event, for additional security?

Eddy, I quoted the questions posed by Special Ops Speaks, but did not add any of my own.