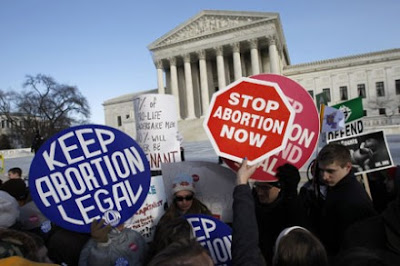 
The conclusion of the trial of Dr. Kermit Gosnell, convicted of first-degree murder in the killings of aborted babies and involuntary manslaughter in the drug-overdose death of a patient, ignited a renewed national discussion of abortion in America. The discussion has not been aided by the mainstream media that, for the most part, ignored the trial.


According to a report in a British newspaper, a Houston doctor, Douglas Karpen, has been accused by four former employees of delivering live babies during third-trimester abortions and killing them by either snipping their spinal cords, stabbing them in the head with a surgical instrument, or twisting their heads off with his hands. The accusations are being investigated by the Texas Department of State Health Services.


The decision by the United States Supreme Court in 1973, known as Roe v. Wade, ran counter to the widespread belief that abortion, except in the case of saving the mother’s life or as the result of rape and incest, should not be permitted. The Court ruled that a woman’s right to privacy under the due process clause of the 14th Amendment included her decision to have an abortion. The right to an abortion, however, did not extend to what the Court deemed “viability”, the ability of the baby to live outside the mother’s womb. The seventh month, 28 weeks, was cited, though the Court noted it could occur at 24 weeks.


Pro-life advocates believe that a fetus is a human being at the moment of conception. Modern technology has confirmed that a fully formed fetus is indeed a human being in every way short of the birth process.


It has been just over forty years since the Court’s decision. In 2012 The National Right to Life Committee (NRLC) released a report that estimated the number of abortions at 54,559,615 based on data from the Centers for Disease Control and the pro-abortion Guttmacher Institute. According to the CDC, in 2010 there were 3,999,386 births in the U.S., a rate of 13 per 1,000 of the population. Of these, 40.8% were born to unwed women.


No matter how you look at such statistics that is a lot of dead babies and it can be argued that a society that permits what amounts to mass murder has lost its moral bearings. A society in which many babies are born to single mothers is inviting a raft of social problems. I didn’t give much thought to the Supreme Court decision in 1973 and, in retrospect, I should have.


It is instructive that Justice Ruth Bader Ginsberg spoke at the University of Chicago Law School on the 40th anniversary of Roe v. Wade in early May and had some strong reservations about the decision that occurred before she became a member of the Court. “The court made a decision that made every abortion law in the country invalid, even the most liberal. We’ll never know whether I am right or wrong…things might have turned out differently if the court had been more restrained.”


The fact that there still remains active opposition to abortion is a tribute to those who still believe that morality is important, that issues regarding the sanctity of life count for something. There are, however, those for whom this and other issues, the right to express one’s views, and the ability to fund the sharing of those views, must be oppressed.


The Catholic Church in America comes to mind for its steadfast opposition to abortion. For others there is the National Right to Life Committee (NRLC). I recently received a copy of a letter the NRLC sent to U.S. Senators regarding the “Follow the Money Act of 2013” (S.791).


The issue, however, was not about abortion per se, but the ability of the NRLC to raise funds for the advocacy of its views. I was astounded to learn that, in the wake of revelations about the way the Internal Revenue Service has been used to thwart organizations that include the Tea Party movement, others self-identifying as “patriots”, and still others who engaged in educating people about the Constitution, from receiving a tax exempt status that would aid their ability to raise funds to advance their views.


Even the Supreme Court has ruled that money is, in many ways, the equivalent of free speech.


The NRLC letter was signed by David N. O’Steen, PhD, its Executive Director and Douglas Johnson, its Legislative Director.


“The ‘Follow the Money Act’ would be better titled the ‘IRS Political Speech Overseer Act of 2013.’ The bill is a 47-page compendium of devices for government intimidation of nonprofit advocacy organizations that communicate with the public about federal public policy issues, and about the positions and votes of those who make our laws. The bill would make the Internal Revenue Service (IRS), and the Secretary of the Treasury (a political appointee), into overseers of an ever-expanding maze of restrictions on independent speech about legislative and political matters, and into executioners for nonprofit groups that offend the powers-that-be.”
The sponsors of S. 791 are Senators Wyden (D-Oregon) and Murkowski (R-Alaska) and the bill was introduced on April 23 before the IRS scandal broke into the news.
Citing an analysus of the bill by the Center for Competitive Politics, the letter quoted it, noting that  “The bill would radically expand the reach of government regulation on speech critical of elected officials and force many, if not nearly all, advocacy groups to register and file burdensome reports with the federal government. The registration and reporting scheme also includes the threat of stiff tax penalties on groups and individuals, along with an organizational death sentence that could be imposed by the IRS for errors. If enacted, this bill would dragoon the IRS into a role as political campaign enforcer, a role the IRS is ill-equipped for and does not want. . . .”


The bill defines “Independent Federal Election-Related Activity (IFERA) to include: “any expenditure that...considering the facts and circumstances, a reasonable person would conclude is made solely or substantially for the purpose of influencing or attempting to influence the nomination or election of any individual to any Federal office (including an expenditure for a public communication that promotes, attacks, supports, or opposes a candidate)…” (Emphasis added)


Influencing who gets nominated or elected in America is a very good definition of the democratic process and the right of any citizen to participate in that vital outcome. It is the essence of free speech.


Forgive the pun, but S.791 is an abortion. It is a bill that would throttle public advocacy and the blunt instrument it would use to do so is the Internal Revenue Service, the same government agency that is now in charge of administering Obamacare.


The enemies of free speech are numerous and we are already witness to the way the Obama administration is seeking ways to throttle it in America. The Follow the Money Act must be defeated or your voice and your vote will be silenced and neutered.

Alan, if you recall our president voted that babies who are born alive during an abortion procedure should be allowed to die. It is thought to be the only bill on which he voted while a seantor in Illinois in his runup to his immaculation.

Again, I contend that if we institute a flat tax with no deductions for anyone or anything these tax influencing decisions would disappear and the IRS would be greatly reduced (along with lobbyists and tax lawyers).

Thanks, and keep up the good work.

The societal problem lies not at the point of "birth of many babies to single mothers", but much earlier in the process where the line separating platonic friendships from intimate relations has become blurred, or even disappeared! The pregnancy & birth is merely the effect, and the immoral relationship the cause!

This makes me sick, seriously SICK in the pit of my stomach..