Obama Runs Away from the War on Terrorism 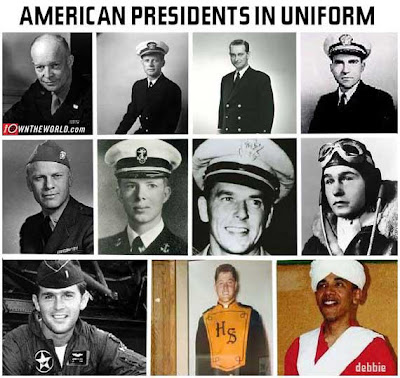 
If you think about the presidents who we remember and honor the most, it is those who faced war and rallied the nation to victory. Our first president, George Washington, sustained the Revolutionary War for eight long years against daunting odds, including a Continental Congress that often provided little support for the men under his command that were fighting to create a new, free nation.


Washington’s reputation in war and peace is the reason that the Constitution designates the President as Commander-in-Chief. He was so highly regarded for his conduct of the Revolution that the Founders concluded that future presidents had to be free to wage war, but only after Congress declared that a state of war existed.


America, however, has not formally passed a declaration of war since WWII and then because it had been declared against us first. Since then wars have often been fought under the sanction given by the United Nations as was the case in the Korean conflict and the two Gulf wars, an erosion of our national sovereignty.


Lincoln is revered for having preserved the Union during the bloodiest conflict this nation ever fought. Franklin D. Roosevelt earned his place in our history for mobilizing the nation prior to the attack on Pearl Harbor, assisting Great Britain prior to entering the World War II, and then pursuing an aggressive policy to defeat the Axis nations.


Quite a few of our presidents gained fame in various conflicts, from Washington to Grant to Eisenhower. Other presidents presided over wars both long and short.


In a speech on May 23, given ironically at the National Defense University, President Obama did his best to run away from war. His opposition to the war in Iraq, his decision to withdraw from Afghanistan, and his efforts to close Guantanamo will likely be seen in the same way as the Clinton policies of the 1990s when Osama bin Laden declared war on the United States on behalf of al Qaeda and subsequently attacked the World Trade Towers twice, in 1993 and on September 11, 2001. Weakness always encourages aggression.


In an application of magical thinking, at the height of the wars in Iraq and Afghanistan the entire U.S. military was instructed not to use the term “global war on terrorism”, replacing it instead with “overseas contingency.” The Obama administration has refused to identify the May 22nd murder of a British soldier on the streets of London by an Islamist as terrorism.


Obama spent his first term and now his second insisting that al Qaeda has been defeated despite ample evidence that it has not. He has never ceased to downplay any event that suggests we and the rest of the world are not engaged in a war with radical Islam.


The Benghazi scandal arose out of an effort to claim and cover-up that the attack was “spontaneous” and the result of an anti-Islam video despite the fact that it occurred on September 11, 2012. Earlier, an attack on soldiers based at Fort Hood was declared “workplace violence.” The bombing in Boston was glossed over as a criminal act, not a terrorist act of war.


The absurdity and the danger of not describing the many instances of the Islamic jihad is a failure of major proportions and not being willing to take preemptive action against its perpetrators suggests it will grow, not diminish, and not cease to threaten the homeland and the world.


In a scathing May 24 analysis of his speech, “President Obama is Tired of Fighting Terrorism”, the Heritage Foundation said that “even as new fronts in the war on terrorism sprang up, the Administration continued to argue that it was winning” despite the Benghazi attack, despite the Boston bombing, despite the attacks in Afghanistan. Time and again Obama has said that the assassination of Osama bin Laden marked the end of al Qaeda and that the isolated drone attacks have reduced its ability to wage jihad. It has not, but Obama proposed scaling back the use of drones.

"More than dumping the war of words, the White House signed off on a new counterterrorism strategy that amounted to running away from Iraq and Afghanistan as quickly as possible and limiting the offensive campaign to whacking top-level al Qaeda with drone strikes”, noting that “The new strategy was bound to fail, fighting the last war while al Qaeda evolved into a global insurgency that has spread from Pakistan to Nigeria.”


The Heritage analysis concluded that Obama “is sick of fighting. Unfortunately, America’s enemies are not.”


The buildup of the paramilitary strength of the Department of Homeland Security and its identification of patriots, veterans, and others critical of the Administration has led many Americans to believe it now exists less to protect Americans than to institute plans to impose a dictatorship.


Obama’s fear of attacks at home and conflicts abroad was reflected in his speech. “Unless we discipline our thinking, our definitions, our actions, we may be drawn into more wars we don’t need to fight, or continue to grant presidents unbound powers more suited for traditional armed conflicts between nation states.”


His Administration has already “defined” Islamic attacks to the point of not calling them Islamic attacks. His concern and reluctance to use the powers of the presidency to protect the nation ignores the new nature of war with a stateless entity called al Qaeda. Indeed, he wanted his war powers scaled back!


In his speech, Obama said “This war, like all wars, must end. That’s what history advises. That’s what our democracy demands.”


The Islamic jihad began in the seventh century and has not ended since then. Our democracy and the future of Western civilization depends on conducting a war to end the current aspects of it until today’s Muslims conclude that jihad as a religious duty is too painful to pursue. That’s how this war will end.

A vitally outstanding column, Alan! To understand the realities and painful truths behind your words, are these.

Criticsl to this reality is to learn these following bitter truths and realities, rendered by a very intelligent and determined, dedicated, and persuasive Ph.D. type, Dr. Bill Warner,

Thank you, Jack. I am often astonished at Obama's ignorance. He is always uncomfortable with reality and thinks calling it something else changes it. It doesn't.

Alan Caruba: "I am often astonished at Obama's ignorance. He is always uncomfortable with reality and thinks calling it something else changes it."

Or, he's not ignorant or uncomfortable at all; rather, everything he says is a mere cover for his actual, well-defined communistic goals. I've said it before, but I think it bears repeating: to understand Obama, study Alger Hiss.

I agree with DJ - Obama and his Democommie leadership know exactly what they are doing to the language.

It would appear Orwell's "1984" was high on their reading list in the college days, in particular, the use of the English language to hide the true nature of Big Brother's Regime.