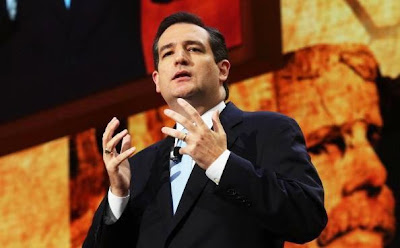 
In 2008, a young, first-term Senator ran for President. His mother was an American citizen and his father was from Kenya. That did not deter him as he was designated a natural-born citizen and thus eligible to hold the office. He won and we have endured four years of his first term and now are watching as his second term is demonstrating further his incompetence and loss of political power. Barack Obama, however, is proof that a Senator with a similar background can run.


That is why I am endorsing Sen. Ted Cruz (R-TX) to be the next nominee of the Republican Party to run for President in 2016. He would be the best candidate to oppose Hillary Clinton, widely believed to already have the Democratic Party nomination. His debating skills are extraordinary, but it is his record in public life that commends him to lead the nation out of the morass of general decline into which it has fallen.


One Cruz donor who has known him for decades summed it best. “He’s fearless.” Columnist George Will has described him “as good as it gets” and the National Federation of Independent Business said of his senatorial campaign that his election was “critical to the small business owners in (Texas and) also to protecting free enterprise across America.”


His father, Rafael, was born in Cuba and fought with Fidel Castro until his communist regime revealed itself and turned on him. He escaped Cuba, arriving in Austin, Texas, speaking no English and with $100 he sewed into his underwear. He washed dishes to help pay for his schooling at the University of Texas. His father is currently a pastor in Dallas.


He worked on George W. Bush’s 2000 presidential campaign and, when Bush was elected, he appointed Cruz an associate deputy attorney general. Prior to his election as Senator, Cruz had served as the Solicitor General of Texas, the State’s chief lawyer before the U.S. Supreme Court. He was the youngest and would be the longest serving Solicitor General in Texas as well as the first Hispanic to hold the office. His previous experience as a law clerk to former Supreme Court William Renhquist has served him well.


As Solicitor General, Cruz authored more than 80 U.S. Supreme Court briefs and argued before it 43 times, securing a number of landmark national victories defending U.S. sovereignty against the U.N. and the World Court, the Second Amendment, the constitutionality of the Texas Ten Commandments monument, the words ‘under God” in the Pledge of Allegiance, and other key decisions.


He was named one of the best 50 litigators under 45 by American Lawyer magazine and one of the 50 Most Influential Minority Lawyers in America by the National law Journal. Texas Lawyer ranked him one of the 25 Greatest Texas Lawyers of the Past Quarter Century.


A recent National Review Online blog post by Robert Costa was titled “Cruz 2016” said he is considering a presidential run according to his friends and confidants. A Republican insider said “If you don’t think this is real, then you’re not paying attention. Cruz already has grassroots on his side and in this climate that’s all he may need.” Republicans fearful that Hispanics would automatically vote for a Democratic candidate can put that fear aside if Cruz was the GOP candidate. He would garner a significant margin of their votes, enough to get him elected in a tight race. Chad Connelly, the chairman of the South Carolina Republican Party said “Conservatives think he’s a rock star. I hear about him from everybody.”


Indeed, Cruz was in South Carolina this past week giving a rousing speech—without notes or a Teleprompter—to a gathering of Republicans and also spoke at the National Rifle Association. He is being received in a fashion that only a promising candidate normally receives.


Critically, the Costa article said, “Cruz isn’t worried that his birth certificate will be a problem. Though he was born in Canada, he and his advisors are confident that he could win any legal battle over his eligibility.” Given the fact that Obama’s birth certificate is widely believed to be a forgery and the path that was smoothed for him by the Democratic Party that would appear to be a foregone conclusion.

A May 3rd Washington Times article cited Michael C. Dorf, a constitutional law professor at Cornell University who said that Cruz “likely does not have any constitutional barriers standing in front of him” and noting that the Congressional Research Service “also weighed in on the issue in 2011 with an opinion that sounds favorable to a Cruz candidacy.”


Even famed Democratic Party strategist, James Carville, speaking on ABC’s “This Week”, said, “I think he is the most talented and fearless Republican politician I’ve seen in the last 30 years. I further think that he’s going to run for president and he is going to create something. I’m not sitting here saying he’s going to win, and I think Senator DeMint is right. I’ve listened to excerpts of his speech in South Carolina. He touches every button, and this guy has no fear. He just keeps plowing ahead. And he is going to be something to watch.”


Proof that Cruz is making an impact in Washington is the fire he is drawing. A recent Heritage Action for America communique noted that he is “under attack by Washington liberals” and is seen as “a threat to the big-government elites.” The committee lauded Cruz because he “has no interest in playing by corrupt Washington rules” and “even some of his so-called friends have resorted to ad hominem attacks” that include calling him a jerk, a liar, immature, narcissistic, and whiny.”  That’s often a sign that a politician is beginning to make a reputation by not going along to get along.


Among the early rivals for the GOP nomination are Marco Rubio of Florida, but his defense of the proposed immigration law that is little more than amnesty for 11 million illegal aliens will hurt him among Republican voters in the primaries. Sen. Rand Paul of Kentucky is also expected to make a run for the nomination, along with Wisconsin Governor Scott Walker and Louisiana’s Bobby Jindal.


At this early point in time, I don’t see any of his rivals gaining sufficient support to gain the nomination. And I can see him winning the 2016 election in a landslide. Hillary is just old news.


I don’t know what kind of president Cruz would be, but I do know he would not be as boring, incompetent, ineffectual, or a constant liar and embarrassment that the current one is.

Editor's Note: I am not a constitutional scholar. To those who say Cruz is not eligible I say this is a matter for the courts. If, however, Obama can be deemed eligible, then Cruz may be as well. The courts, during Obama's first term, refused to address the issue.

Sorry, no share button. Should add this feature and will check it out.

Well written! I am so proud that Ted Cruz represents my state!

Alan I can do a link for this article on G+ if you like. I'm sure it will be well received in my limited circles which are mostly conservative.

Necromancer, be my guest! Thanks.

Good post, and I agree completely. Even though my knowledge of Sen. Cruz is limited, from what I see he excites me as a potential candidate.

I dont think it would behoove us to promote a lawyer who clearly has subverted the intent of the founding fathers separation of church and state. The founding father, Thomas Jefferson suggested that we leave out the phrase 'divine' inalienable right, just for this reason.

Any 7th grade civics student would be willing to debate this.

@Ian. It's America and you have right to your opinion, but I question your facts.