Too Pooped to March?


There have been twenty-seven marches in Washington, D.C. since President Obama took office in 2009. The most recent was on February 13 called “Forward on Climate” in which an estimated 40,000 people demanded action on “climate change” and was largely devoted to protesting the expansion of the Keystone pipeline.


The weather that day was brutally cold and it probably did not occur to participants that humans can do nothing about the climate or that they used lot of gasoline, an oil derivative, to get to and from the march.


The only march in which I participated was the Vietnam Moratorium march on November 15, 1969. It drew 600,000 people and there were comparable marches around the nation that day in which some two million participated. It was a very unpopular war, having been vastly expanded under President Johnson and continued into the Nixon years. There were a dozen major marches opposing it, starting in 1965 and lasting until 1974 when an estimated ten thousand people rallied for the impeachment of Nixon. The war ended in 1975.


Between 1950 and 1999, there were forty-five marches that merited being cited as being of some significance. The most famous was the August 28, 1963 March on Washington for Jobs and Freedom, a civil rights march during which Dr. Martin Luther King, Jr., delivered his “I have a dream” speech. An estimated 250,000 participated. It had been preceded in 1957 by the Prayer Pilgrimage for Freedom during which Dr. King demanded “Give us the ballot.”


Other marches over the nearly fifty-year period were devoted to demands for women’s rights, a pro-life march, and gay and lesbian rights.


Between 2000 and 2009 there were nearly forty marches, quite a few of which were anti-war marches protesting the conflicts in Afghanistan and Iraq. 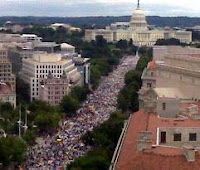 In March 2009, the largest march ever staged by fiscal conservatives as a protest against high taxes and big government—the proposed Obamacare legislation—was held, estimated to have drawn between 600,000 and 800,000 participants, though others put the figure at a million or more. It was notable for the way the mainstream media largely ignored it, though it was broadcast on C-SPAN.  Its sponsors included the 9-13 Project, Freedom Works, the National Taxpayers Union, The Heartland Institute, Americans for Tax Reform, Tea Party Patriots, and ResistNet. It was also one of the most orderly and peaceful such rallies, and by far the largest since the days of the Vietnam War protests.


From 2010 to the present, one of the marches was the absurdist Rally to Restore Sanity and/or Fear held by Jon Stewart and Stephen Colbert of the Comedy Channel. It drew an estimated 200,000 people, mostly young, mostly just happy to have something about which to march. In 2011 there was a Right2Know March for Genetically Engineered Foods demanding that GMO foods be reported on the label. In November, Occupy Wall Street demonstrators marched in Washington and New York against the extension of tax cuts, claiming they benefitted the rich.


2012 was a low point for marches on Washington, D.C., with only four. They were largely ignored by the mainstream media; one called for the closing of Guantanamo and another for continued funding for Public Broadcast.


The lack of marches of any consequence, with the exception of the March 2009 event protesting Obamacare begs the question of why such events have been so few. The answer may lie in the way the Internet’s social media permits people to rally electronically instead of physically showing up in the nation’s capital. It may also speak to the mood of the nation, both on the Left and Right, which reflects its depressed economic conditions of high unemployment, and the lack of an issue to mobilize people.


That could change. The withdrawal of U.S. troops from Afghanistan and Iraq plays to a war-weary public, the frequent cause for marches during the Vietnam War years. The gathering storm of Obama administration scandals, however, could mobilize public protests.


Will we see another big march in Washington, D.C. this year and the remaining years of President Obama’s second term? Stay tuned.

If there are conservatively oriented marches, we'll hear nothing of them.
The only march I ever participated in was when the guys in the men's dorm at Washington University St.Louis, marched over to the girl's dorm in search of unmentionables. One poor cop came to break it up. The group somehow let the air out of all of his tires.
Radical behavior in 1959!

If two million armed patriots with loaded rifles march on Washington, D.C. this year - it's almost certain this march WON'T be ignored by the Lamestream Media - or Homeland Security:-)

Ron, there are millions of men and women who to hunt. They represent an army larger than our own and several other nations combined. An estimated 80 million Americans are armed.